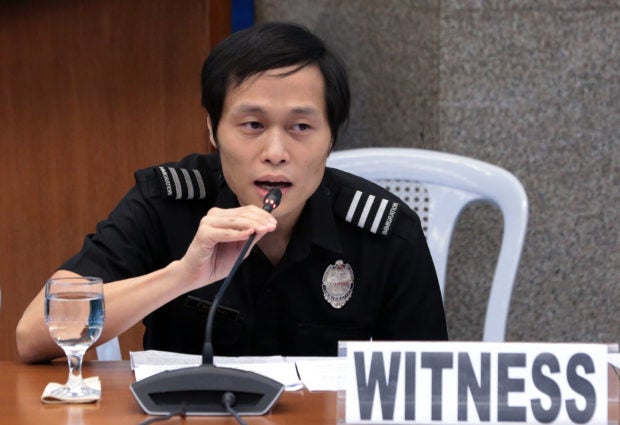 President Rodrigo Duterte has ordered the sacking of all immigration officials and employees allegedly involved in a bribery scheme that allowed hundreds of thousands of Chinese to illegally enter the country to work for Philippine offshore gaming operators (Pogos) as a whistleblower unraveled more details of the airport payoffs during a Senate hearing on Thursday.

“The President considers this anomaly, which some define as the ‘pastillas scheme,’ as a grave form of corruption which cannot be countenanced by the government,” said presidential spokesperson Salvador Panelo.

“Any official or employee who commits any wrong in the performance of their respective duties shall be meted out with the punishment that they deserve and in accordance with our penal laws,” he said in a statement.

“The present situation in the Bureau of Immigration (BI), as well as how it is being run by Commissioner Jaime Morente, will be taken up in the next Cabi­net meeting,” he added.

Panelo told reporters the President had “received reports” about the racket and “found prima facie, or probable cause” against the BI personnel.

He did not say how many were sacked, but BI spokesperson Dana Sandoval said 19 were immediately relieved of their duties “in compliance with the directive of the President.”

The racket, which also involved Filipino and Chinese travel agencies, was exposed during Monday’s Senate hearing conducted by Sen. Risa Hontiveros, who called it a “pastillas operation” as the bribe money was usually rolled up like the popular milk candy.

Under the scheme, corrupt immigration officers in cahoots with tour operators provided “VIP treatment” to Chinese who want to work for Pogos illegally for a P10,000 “service fee.”

During Thursday’s hearing, Immigration Officer Allison “Alex” Chiong, who was assigned at Ninoy Aquino International Airport (Naia), said syndicates within the BI even competed against each other to gain favor with travel agencies, which provided the names of Chinese willing to pay for VIP treatment.

By his reckoning, only 10 percent of BI personnel were not involved in the scam in which he admitted he was also involved.

Hontiveros said Chiong, who has received death threats, was granted immunity for disclosing details of the payoffs.

The immigration officer said he decided to speak up because he felt that his fellow BI workers “have been enslaved by this corrupt system.”

“And whether or not they’re aware of it, they are also victims,” he said, adding that he made this “sacrifice” to free them from the corrupt system that all Filipinos also need to know about.

‘This is an invasion’

“I feel this is an invasion,” he said, referring to the hordes of Chinese workers who have entered the country since 2016.

Chiong said the members of the syndicate included BI employees Totoy Magbuhos, Deon Albao, Paul Borja, Anthony Lopez and Dennis Robles. The five men were not present at the hearing.

He said Bien Guevarra, Glen Comia and Den Binsol, former chiefs of the Travel Control Enforcement Unit, were no longer with the BI but maintained their group’s operations.

In his affidavit presented to the Senate, Chiong also said that in 2016, each casino high roller arriving in the country was offered VIP services for P2,000 to fast track their entry.

Guevarra, Comia and Binsol, who were under Ports Operation Division chief Red Marinas, took over that racket and distributed “commissions” to other BI personnel weekly, he said.

In 2017, when the number of Chinese arrivals increased, immigration officers who were in a Viber chat group received the names of Chinese travelers who did not have to go through the normal immigration screening.

The chat group was deleted when the National Bureau of Investigation began an investigation but reemerged later using a new name and more immigration officers got involved, Chiong said.

“News of the operation spread fast. This time, other syndicated groups within the bureau started submitting their own list of names of Chinese nationals,” he said.

Each immigration officer involved in the scheme at Naia Terminal 1 received P20,000 weekly, and P8,000 weekly for those at Terminal 3, he said.

Chiong said there also were “special arrangements” that allowed blacklisted Chinese, or those with derogatory records, to enter the country and whose passports were not even scanned on arrival.

The rate for these arrangements was around P50,000 to P200,000 per head and the package includes hassle-free departure, he said.

Morente told Senate reporters he was “very glad” that Chiong exposed the immigration personnel who gave BI “a bad name.”

He said he would welcome the sacking of corrupt immigration officers and there were thousands who could replace them to do proper work.

Morente said he had limited powers under the law to remove corrupt people in the agency because he had no authority to suspend or sack permanent employees.

He said he would welcome a new immigration law that would expand the powers of the immigration chief.

The President said he agreed that Morente had “limited” authority and that he still supported the former Davao City police chief who had served under him when he was city mayor.

“Morente, I love him … he is a good man,” he said in a speech to police officers in Davao city on Thursday night.

He said he had ordered the relief of the immigration officers at Naia “with the end view of dismissal.”

“Do not tempt the gods, just do your work, I will protect you,” he reminded the police officers.

Hontiveros, who has led the exposés on illegal activities linked to Pogos, said she planned to conduct more hearings to unmask the “big fish.”

“The immigration officers and midlevel employees at the airport only get change. And not all of them are on the take. We need to go after the big fish because the money goes way beyond frontline employees,” she said.

“This is what we should identify and hold accountable under the law,” she added.

Sen. Sherwin Gatchalian said there was no point in allowing Pogos to continue operating when criminal syndicates profited greatly from them.

“We want legitimate businessmen who pay the right taxes and who will not commit crimes. So my point here is, at this point, it seems to me that Pogo is not giving the country any gain socially and economically and we don’t want that,” he said. —WITH A REPORT FROM TINA G. SANTOS