Thousands of women rally for abortion law in Argentina 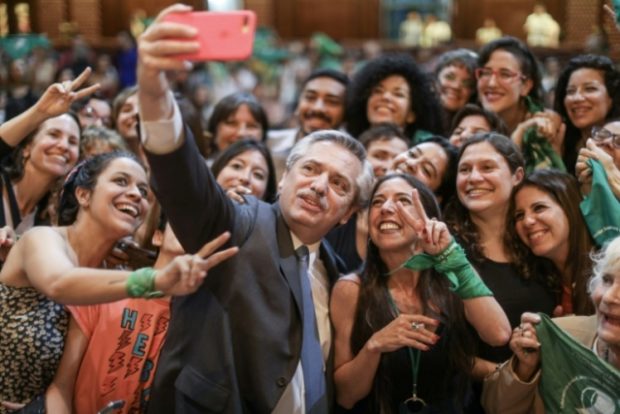 Thousands of women, many sporting the green scarves that have become the symbol of Argentina’s abortion rights movement, rallied in Buenos Aires on Wednesday to campaign for a new bill to legalize abortion.

Two years after a similar bill was narrowly defeated by lawmakers in the conservative South American country, activists have been buoyed by recent pledges by leftist President Alberto Fernandez to prioritize a new bill.

“We are here to fight for this law to come out this year,” psychologist Antonella D’Alessio told AFP. “An unwanted pregnancy is synonymous with torture.”

The rally called by feminist groups was held in front of the Congress where in June 2018 a bill to legalize abortion was approved by the lower house, only to be defeated by conservatives in the Senate amid pressure from the Roman Catholic Church.

Natalia Lissarrague, a 38-year-old nurse, said legalizing abortion “is important because it gives everyone the possibility of accessing an abortion, in hospital with all the necessary techniques, and not dying in hiding.”

Lissarrague, 38, attended the rally with her daughters aged five and 12.

Reiterating a campaign promise, Fernandez said earlier this month he would propose a law to “end the penalization of abortion” and allow anyone seeking an abortion to receive care in a public health center.

Liberals won ground in the Senate in November’s elections, renewing activists’ hopes that any new abortion bill would now be approved in the once staunchly conservative chamber.

Conservatives are expected to fight the issue tooth and nail however in a battle which is likely to mirror the bitter divisions of the last campaign.

The Catholic Church in Argentina has called an anti-abortion rally on March 8 to coincide with International Women’s Day.

In Pope Francis’s homeland, abortion is punishable by up to four years in prison, and allowable only in cases of rape or if there is a risk to the life of the mother. NVG