Abuse victims look to Vatican after UN meetings in Geneva

GENEVA  — Three deaf victims of sexual abuse by priests in Argentina wrapped up a string of meetings with United Nations human rights officials in Geneva on Wednesday, hoping to build pressure on the Vatican — and Pope Francis himself — to come clean about the crimes committed against them. 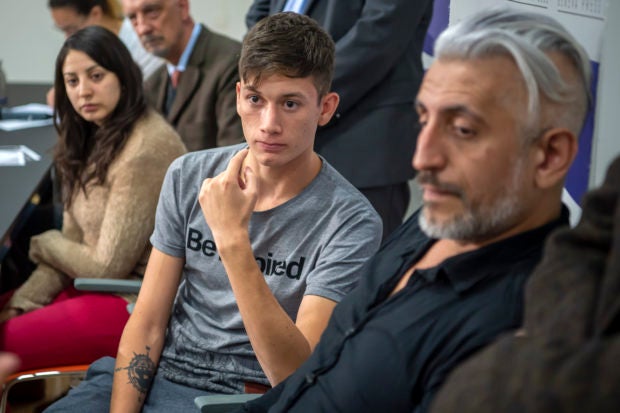 Deaf survivors of clerical sexual abuse from Argentina, from left, Claudia Labeguerie, Ezequiel Villalongo and Daniel Oscar Sgardelis, take part in a news conference at the Geneva Press Club in Geneva, Switzerland, Wednesday, Feb. 19, 2020. On Wednesday, they had a string of meetings with United Nations human rights officials in Geneva, hoping to build pressure on the Vatican _ and Pope Francis himself _ to come clean about the crimes committed against them. (Martial Trezzini/Keystone via AP)

The survivors and their defenders see an opportunity for a Vatican reckoning following criminal convictions handed down in Argentina in November in cases brought by the three former students at the Catholic-run Antonio Provolo Institute for Deaf and Hearing-Impaired Children.

The case has directly implicated the Argentine pope since Francis was told about one of the priestly abusers in Argentina as early as 2014 by former students at the Provolo school in Verona, Italy, who said they were also abused by the priest.

The delegation of Argentine victims, their lawyers and supporters from Argentina and the United States were taking their case to Rome after leaving the Swiss city, hoping to win an audience with the pope.

So far, the request has gone unanswered, said Sergio Salinas, a lawyer for the Argentine rights group Xumek that supports abuse victims.

Speaking out with gestures rather than words in a news conference steeped in emotion, the victims emphasized the need to share their stories to help foster accountability and prevent others from being victimized too.

“We believe it was very important to meet with these (U.N. human rights) representatives because we needed to tell them our story, and we needed to tell them that our rights have not been respected,” Daniel Sgardelis signed through Spanish interpreter Erica Labeguerie, the sister of another survivor, Claudia Labeguerie. They were joined by a fellow victim, Ezequiel Villalonga.

At the end of a news conference at the Geneva press club, they and supporters joined together to sign the word for “justice” in unison. The Associated Press does not typically identify victims of sexual abuse against minors, but the three were making their case publicly on Wednesday.

Three months ago, a court in Argentina sentenced two priests to more than 40 years in prison for sexually abusing deaf children at the Provolo school in the northwestern municipality of Lujan de Cuyo.

The survivors are demanding that the priests be defrocked, the maximum punishment imposed by the Catholic Church. Usually the Vatican waits for all criminal appeals to be exhausted before meting out church punishments.

The judges found the men guilty of 20 counts of abuse, including rape, that occurred between 2005 and 2016 at the school, which has since shut down. The 10 victims were former students and all minors at the time of the abuse.

The complaint in Argentina built upon another by the victims in the northern Italian city of Verona.

They said Wednesday said they declined to join the Argentine call for a papal audience, noting that they had sent Francis a letter in 2014, and hand-delivered him another one in 2015, identifying Corradi as an abuser in ministry in Argentina.

“Pope Francis has never shown himself to be our ally in our fight, and has never helped those of us who were victims,” the Provolo victims said in a statement.

They said they nevertheless supported the Argentine victims in their quest for justice.