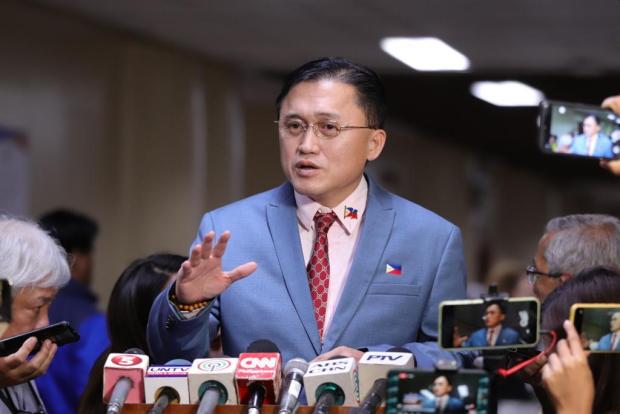 MANILA, Philippines — Sen. Christopher Lawrence “Bong” Go urged his fellow lawmakers to just “vote according to your conscience” on the franchise renewal of ABS-CBN with the best interest of the Filipino in mind

“Once it reaches our office here in the Senate, I will decide,” Go said in an ambush interview on Wednesday. “Nasabi ko na ‘yan [I already said that]. Vote according to your conscience.”

ABS-CBN currently faces an uncertain future as its authority to broadcast was put in question after Solicitor General Jose Calida filed in the Supreme Court a quo warranto petition against it, saying that it committed two grave violations of its franchise.

As for the inquiry being pushed in the Senate on the network’s franchise renewal, Go mentioned that he would participate, saying: “Ito namang pagdinig, maaaring in aid of legislation. Marami silang gustong pakinggan. Maybe that’s the proper forum na mapakinggan both sides. Pakinggan natin sino gusto magsalita, sino gusto magreklamo. I might also ask some questions.”

[This hearing may be in aid of legislation. They want to hear a lot of people. Maybe that’s the proper forum for hearing both sides. Let’s listen to whoever wants to speak, whoever wants to complain. I might also ask some questions.]

Go stressed, however, that any legislative action regarding franchise bills must emanate from the House of Representatives, according to the law.

“If the Senate decides to start the discussions to look into compliance of ABS-CBN with their existing franchise… or to consider possible extension, I will participate to clear any pressing issues and I can assure the public that I will be fair and impartial,” he added.

Go also said that it would be up to the House to decide how it would act on the pending franchise bill.

“Franchise renewal, it will emanate from the lower house. So dapat na rin nilang i-tackle ito. Sa congressmen: Just vote according to your conscience. Hopefully, it is for the interest of the Filipino people,” he said.

Asked if the Senate has enough time to conduct such inquiry given that the network’s franchise is set to expire on March 31, Go responded: “I cannot answer that because malapit naman rin po [it’s so near]…”

[It is a legal question again if they can operate after the franchise expiration. The legal issues should be answered by the NTC or the DOJ.]

[Usually, while the franchise renewal is being discussed, they just let the company continue operating.]

Go also said that Calida might also be invited to attend and speak in the hearing.

Meanwhile, Go questioned the joint resolution filed by Senate Minority Leader Franklin Drilon seeking to extend the franchise of ABS-CBN up to the end of 2022.

[Why a joint resolution? Why don’t we just approve or disapprove the renewal of the franchise? Why Dec. 31, 2022? Is there politics involved here?]

Ending the interview, Go assured the public that President Rodrigo Duterte would always be fair and balanced with his judgments.

He also said that the action of the executive branch in case the franchise of ABS-CBN lapses should be fair and impartial as well.