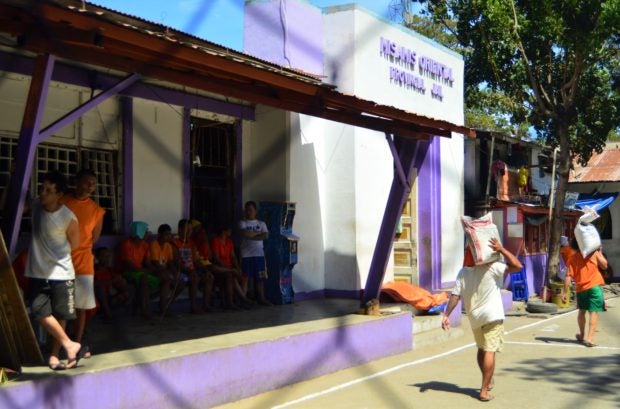 It’s business as usual for inmates at the Misamis Oriental Provincial Jail in Cagayan de Oro City after the scandal created on social media by a video showing prisoners bullying a naked inmate and forcing him to dance. JIGGER J. JERUSALEM

CAGAYAN DE ORO CITY – Authorities at the Misamis Oriental Provincial Jail (MOPJ) here are investigating the perpetrators of a case of bullying which involved a naked inmate being prodded to dance by other prisoners, an incident caught on video now circulating online.

Dominador Tagarda, MOPJ warden, on Wednesday (Feb. 19) said he had ordered an investigation of jail officers who were present when the naked dancing episode took place. Two inmates involved in the incident had been put in isolation, said Tagarda.

The 3:33-minute video showed Justin Juls Villanueva, 18, an inmate charged with rape and homicide, naked and being egged on by fellow inmates to dance.

Tagarda confirmed that the episode took place in one of the cells at the facility being run by the provincial government on Saturday, Feb. 15, a day after a court issued a commitment order for Villanueva to be locked up at MOPJ.

The video, widely shared on social media after its leak online, showed Villanueva without clothes and bald head dancing to budots, a type of dance music, inside a wooden structure. A piece of clothing was jammed in his mouth.

As he danced, inmates could be heard jeering and taunting him while two other prisoners recorded the scene with smart phones.

A voice was heard in the video shouting: “Clap your hands, you’re only good at watching.”

Another voice was heard saying: “Be thankful that you are only made to dance” apparently addressed to Villanueva.

As Villanueva squatted as part of the dance move, a voice was heard yelling: “Put that brief in your mouth.”

Although inmates took part in the episode by taunting and jeering Villanueva, no physical harm was inflicted on the rape accused.

Tagarda ordered the investigation after learning of the incident.

He said he also reminded all prisoners and jail guards to respect all inmates, especially the new ones, no matter what criminal charges they were facing.

“Their human rights must be respected,” the jail official said.

He added it was “not the policy of the MOPJ” to allow inmates to be subjected to any form of abuse during their detention.

Tagarda said he was coordinating with the provincial government to investigate how prisoners got hold of smart phones, which were prohibited items in jail.

“Jail officers on duty are now being investigated since it happened under their watch,” he said.

He did not identify the jail officers, though.

Read Next
Robredo calls for swift gov’t action vs ‘pastillas scheme’
EDITORS' PICK
Nestlé Philippines’ ‘NESCAFÉ Plan’ bags Grand Anvil at PRSP 56th Anvil Awards
Smart reinforces superiority with best speed and mobile video experience in PH
Every Filipino home can now be a smart home with realme TechLife
New 3,045 COVID-19 cases push PH total active cases to 40,074
LTO’s P500-M deal for screws draws scrutiny
How to lose a PH genius: Wesley So officially a US citizen
MOST READ
US lays out list of aid to ‘satisfy’ Duterte following VFA payment demand
How to lose a Filipino genius: Wesley So officially a US citizen
Robredo on Sara Duterte leading poll surveys: Why are Filipinos drawn to leadership of this kind?
So: I lacked connections to succeed in PH ‘culture’
Don't miss out on the latest news and information.