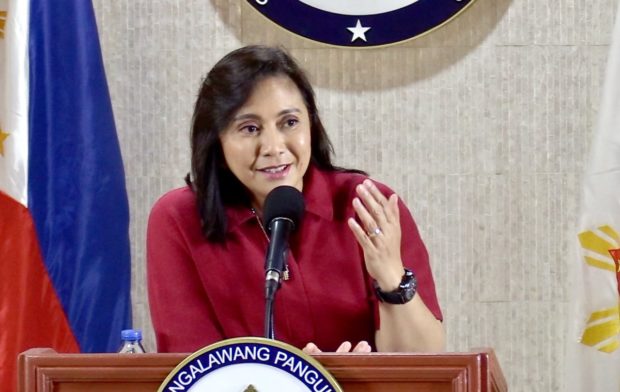 This was how Vice President Leni Robredo described Wednesday the move of the Office of the Solicitor General to stop broadcast giant ABS-CBN and its representatives from discussing the quo warranto petition it recently filed against the media network.

(For me, first off, freedom of expression, the freedom of the free press, that’s primordial.)

(But what’s funny here is they are seeking a gag order against a media company. It’s very ironic that a media company that you’re expecting to inform the people is being asked not to speak out.)

The opposition stalwart also branded the move of Solicitor General Jose Calida, the government’s chief lawyer, as “disconnected from reality.”

Calida filed on February 108 a “very urgent motion” asking the high court to issue an order that bans “parties and persons acting on their behalf” from releasing statements and discussing the merits of his plea to forfeit ABS-CBN’s existing legislative franchise.

President Rodrigo Duterte has publicly threatened to block the franchise renewal of the media network over its failure to air his 2016 presidential campaign advertisements. He even told ABS-CBN owners to just sell the company if they want it to stay in business.

Robredo, who is also a lawyer, warned of implications should ABS-CBN be shut down.

(It is sad that apparent misunderstanding from the past led to the filing of the quo warranto petition.)

(The implications of this are not just on ABS-CBN. The implications affect all of us: that a media company like ABS-CBN can be suppressed in this way, who would be safe from this kind of suppression?)