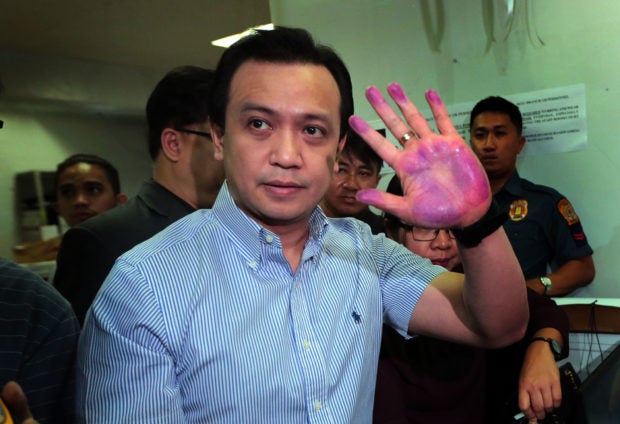 Trillanes was met by his lawyer, Reynaldo Robles, who accompanied him to the Quezon City Metropolitan Trial Court to post a P10,000 bail for the case of conspiracy to commit sedition that he is facing.

The offices of the Philippine National Police-Aviation Security Group (PNP-ASG), National Bureau of Investigation and Bureau of Immigration at the airport have not yet received copies of the arrest warrant against Trillanes when he arrived.

As the former senator posted bail in court, he slammed the case as part of the Duterte administration’s continuing political persecution against its critics and opposition leaders.

Last Friday, Judge Kristine Grace Suarez ordered the arrest of Trillanes and 10 others, including Peter Joemel “Bikoy” Advincula and two priests, for conspiracy to commit sedition over the viral “Bikoy” videos that linked President Rodrigo Duterte and members of his family to the drug trade.

“I’ve accepted the fact that this could happen because we stood against a dictator like Duterte,” Trillanes told reporters after posting bail.

“I returned to the country to face this because I am not afraid,” he added.

The court had scheduled the arraignment and pretrial conference on the case on March 17, 2 p.m.—With a report by Julie M. Aurelio