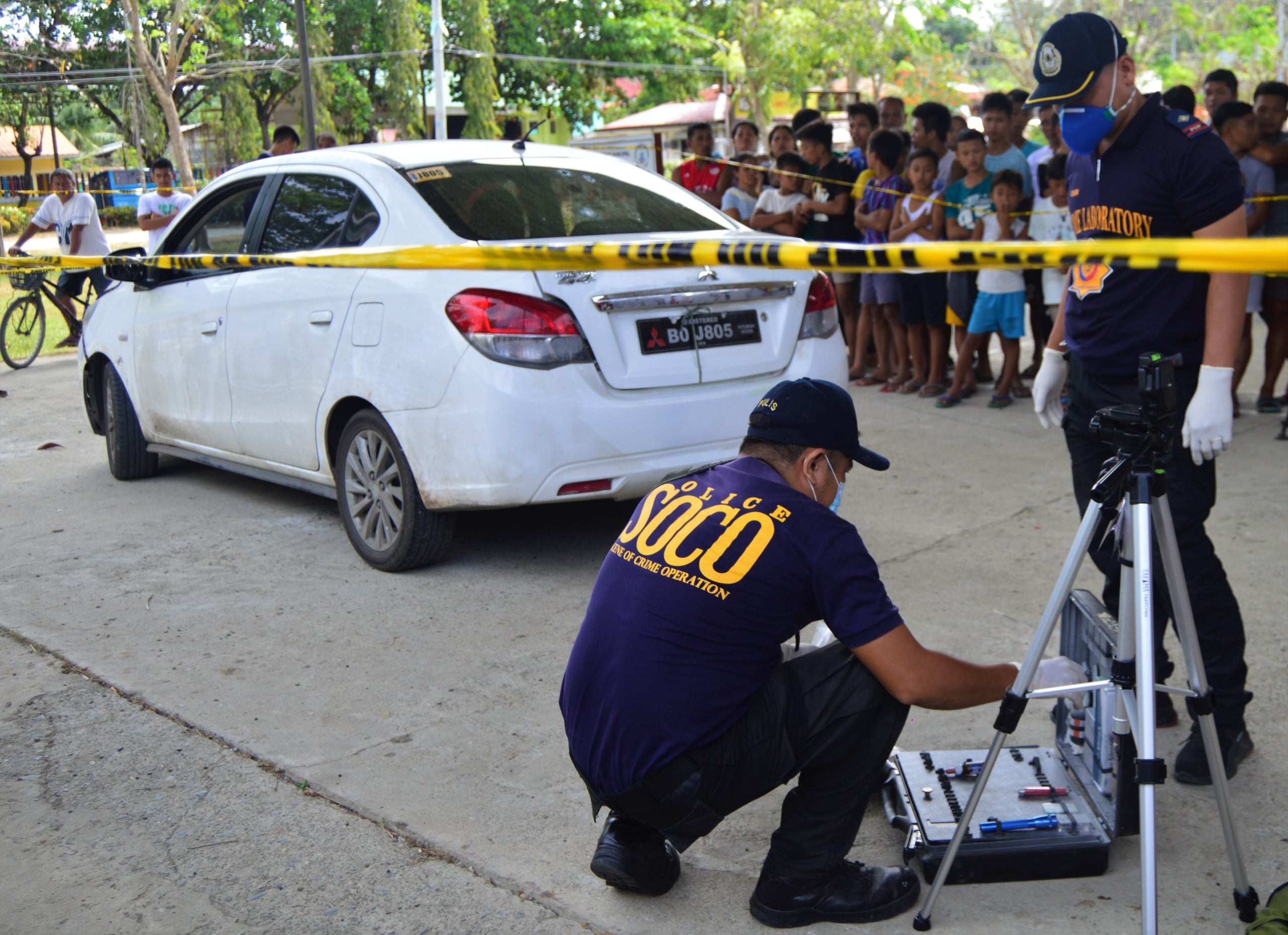 Scene of the Crime Operatives examined on Tuesday the vehicle used by a group armed men that engaged police in a shootout in Libertad town, Misamis Oriental Monday night. (Jigger J. Jerusalem)

LIBERTAD, MISAMIS ORIENTAL—-Police lost one of their men and killed one suspect after a gunfight with a group of men believed to be transporting firearms and on a robbery mission.

The group was traveling on a sedan from Cagayan de Oro City on Monday when it was flagged down at a police checkpoint at the village of Poblacion past 8 p.m.

Before Tinamisan could be quizzed, his four companions alighted and fired at policemen manning the checkpoint, triggering a gunfight, according to Capt. Rham Camelotes, Libertad police chief.

The four armed men ran toward a bridge and jumped into a dried up river to escape.

When the gunfight died down, SSgt Ronald Cagpuyan was killed and Chief MSgt Fernando Maestrado was wounded.

Also killed was Tinamisan, a native of Ozamiz City.

Capt. Dino Magno, police chief of Initao town nearby, said police had been alerted earlier about a vehicle carrying firearms which turned out to be the car being driven by Tinamisan with conduction sticker No. BO J805.

Police lost track of the four suspects who jumped into the river as they had no night vision capability to see in the darkness. 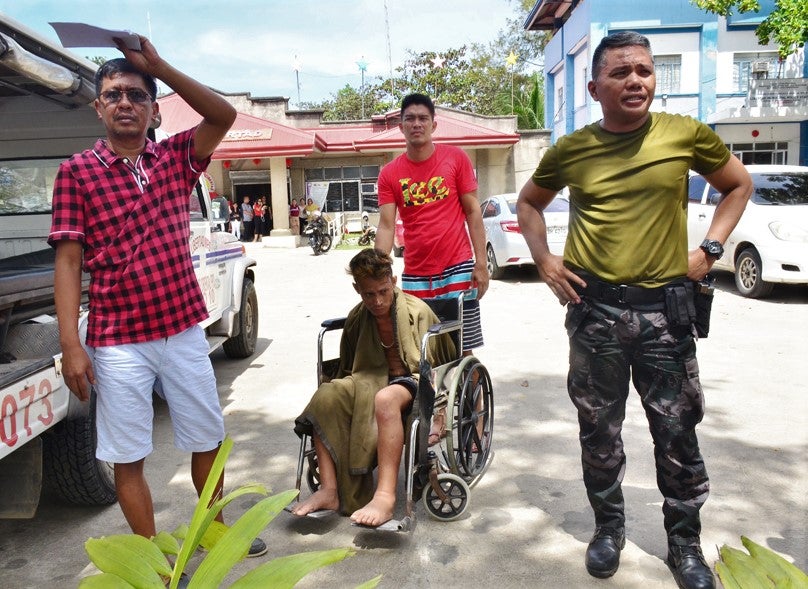 One of the suspects (in a wheelchair) in the shootout between armed men and police in Libertad town, Misamis Oriental Monday night. Police identified him as Richard Perez, although he identified himself to reporters as Richard Manda. (Jigger J. Jerusalem)

In the morning of Tuesday (Feb. 18), police patrolled the vicinity of the river where the suspects jumped and found one of them, Richard San Perez, hiding in the bushes.

Upon interrogation, Perez, 31, said he is a resident of Lapu-Lapu City who had been temporarily staying in the town of Opol, Misamis Oriental.

Perez admitted to reporters his group was on a robbery mission in the town of Tubod, Lanao del Norte province.

Perez, who also identified himself as Richard Manda, said he came to Cagayan de Oro eight days ago after a friend called him up asking him to come over.

He said the group stayed at a house in Opol town owned by a doctor who had not been identified.

Police had launched a manhunt for the three other suspects.

Libertad Mayor Reynaldo Uy said he ordered the suspension of classes on Tuesday in elementary and high school to keep students out of harm’s way.

Residents in the area said they believed the three suspects were just in the vicinity just before daybreak of Tuesday.

One woman said she was roused from sleep around 3 a.m. on Tuesday by a man who was asking to buy food at her store. She said she didn’t respond to the knocking for fear the man was among those being hunted.

A worker at a coconut farm said he saw two armed men walking toward the beach early on Tuesday. He said he believed they were among those being hunted but kept mum for fear of retaliation. With Froilan Gallardo and Jigger Jerusalem