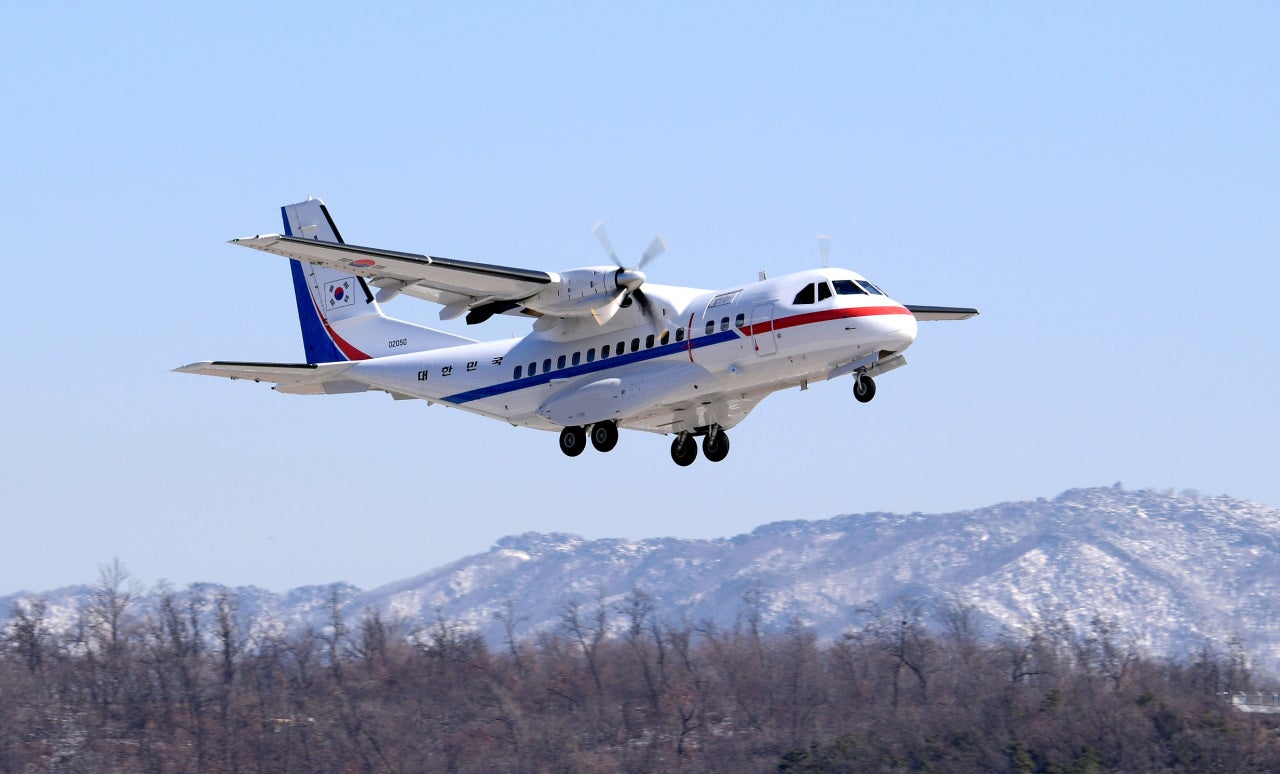 The VCN-235 Air Force plane takes off from Seoul Air Base in Seongnam, Gyeonggi Province, at noon on Tuesday, heading to Japan to evacuate South Korean nationals aboard the coronavirus-stricken cruise ship. (Yonhap)

SEOUL — A South Korean government jet left Tuesday to evacuate Koreans aboard the coronavirus-stricken cruise ship in Japan, amid concerns of rapidly rising cases of COVID-19 onboard.

The VCN-235 Air Force plane left Seoul Air Base in Seongnam, Gyeonggi Province, at noon, and landed in Japan’s Haneda Airport, 20 minutes away from the Yokohama port where the cruise ship Diamond Princess is docked.

The plane is scheduled to leave Japan on Wednesday and arrive at Gimpo Airport at around 8 a.m.

The plane is set to evacuate five people — four South Korean nationals and a Japanese spouse — from the cruise ship. But the final number could change depending on the situation, according to government officials.

There are 14 Koreans onboard — nine passengers and five crew members, all of whom are reportedly unaffected by the virus. They have been stranded on the ship with around 3,700 people since Feb. 3, after a former passenger was diagnosed with the virus. As of Tuesday, 454 people were infected with COVID-19, in the largest cluster of virus cases outside of China.

The remaining Koreans have said they want to stay on the ship, largely due to their residence status tied to Japan. The mandatory quarantine on the cruise is set to end Wednesday, which means the remaining Koreans may leave the ship if they test negative.

Upon returning from Japan, the evacuees will be transported to quarantine facilities of Incheon Airport for 14 days, similar to hundreds of Korean nationals airlifted from Wuhan, China, the epicenter of the COVID-19 outbreak.

“The decision to repatriate Korean nationals who wish to return was made, on the outbreak of many COVID-19 cases on the Diamond Princess cruise,” said Vice Health Minister Kim Kang-lip during a regular briefing. “The location of the temporary lodging facility was selected considering the small number of evacuees.”

The government had decided to deploy the 19-seat government plane, considering the small number of evacuees and the cost, it added.

The evacuees will be expected to pay a plane fee of around 300,000 won ($252) per adult, similar to the rate billed for Koreans airlifted from Wuhan.

Traveling together on the plane will be doctors, nurses, and Foreign Ministry and quarantine officials. Upon arrival, they will be transported to Yokohama port and will quarantine the evacuees on the cruise ship first.

Evacuees who test positive for COVID-19 or exhibit symptoms will be prohibited from boarding the flight. Those infected with the virus will stay in Japan for treatment.

Seoul’s sudden decision to evacuate its citizens comes as many countries have decided to airlift their citizens stranded on the cruise ship. Last week, the government was not considering the evacuation, as most of the Korean nationals on the cruise consider Japan their main country of residence and had not expressed intention to return.

The US was the first to send planes, transporting 328 citizens from the cruise back to the US. Among them, 14 passengers tested positive for COVID-19.

Australia, Canada, Israel, Italy and Hong Kong were also planning to repatriate citizens from the cruise.

As of Tuesday, more than 73,000 have been infected with COVID-19 around the world, with the death toll exceeding 1,800, mostly in China.

Seoul confirmed another case of the coronavirus on Tuesday, bringing the total number of infections here to 31.