Aging Shiite cleric a powerhouse in Iraq. What comes after? 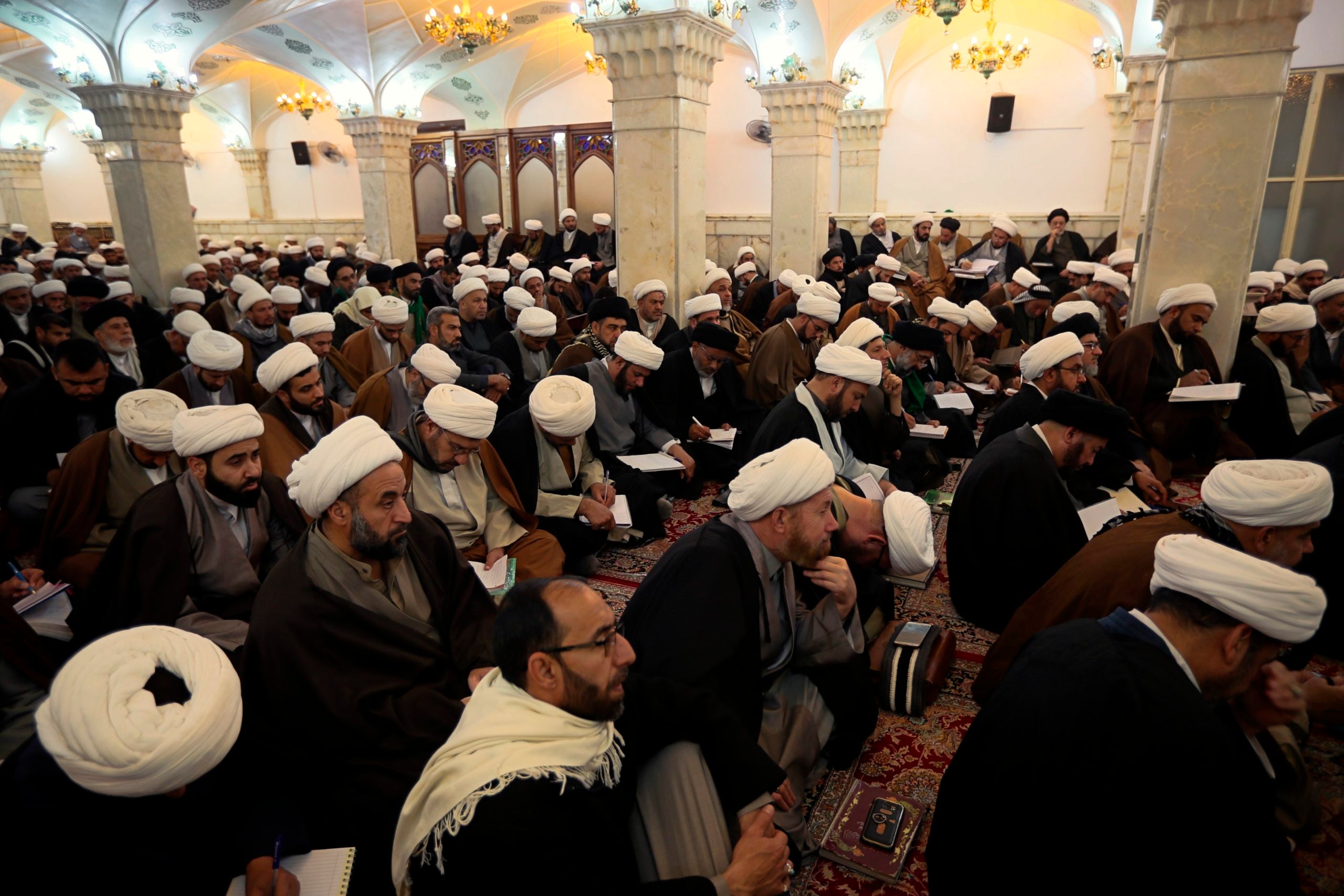 In this Sunday, Feb. 2, 2020, Shiite seminary students attend a lecture at “Hawza” seminary, in the holy shrine of Imam Ali, the son-in-law, and cousin of the Prophet Muhammad and the first Imam of the Shiites, in Najaf, Iraq. Grand Ayatollah Ali al-Sistani, Iraq’s top Shiite cleric, turns 90 this year, and when he recently had surgery it sent chills around the country and beyond. What happens when al-Sistani is gone? Iran is likely to try to exploit the void to gain followers among Iraq’s Shiites. Standing in its way is the Hawza, the centuries-old institution of religious learning which al-Sistani heads and which follows its own tradition-bound rules. (AP Photo/Hadi Mizban)

NAJAF, Iraq  — When Iraq’s top Shiite cleric underwent surgery for a fractured bone last month, it sent shivers around the country and beyond. “May God heal Iraq,” read a photo of Grand Ayatollah Ali al-Sistani that circulated online.

Frantic supporters shared prayers. Anti-government protesters hung photos of the black-turbaned cleric with a long white beard and bushy eyebrows, declaring, “The hearts of the revolutionaries are with you.” Al-Sistani’s well-wishers included officials from both Iran and the United States, the bitter rivals for influence in Iraq.

The incident put into focus the question: what will happen after al-Sistani, who turns 90 this year, is gone? The question has gained added importance for an Iraq deeply embroiled in U.S.-Iranian tensions and gripped by months of anti-government protests.

Al-Sistani’s death would rob Iraq of a powerful voice whose sway among followers and positions against foreign intervention are believed to have curbed further Iranian influence. He sought to restrain Iranian-backed Shiite militias accused of abuses and moderate the government, repeatedly stating that the Iraqi people are the source of authority.

Iran, analysts say, will likely try to exploit the vacuum to expand its influence among Iraq’s Shiites.

The Iranians “don’t want another al-Sistani … They don’t want somebody who is strong, who overshadows their own supreme leader,” said Abbas Kadhim, director of the Iraq Initiative at the Atlantic Council. While none of al-Sistani’s potential successors are “in Iran’s pockets,” Tehran can benefit from a weak figure.

“If this person is silent and doesn’t intervene, people will look elsewhere for guidance,” Kadhim said.

Iran’s post-al-Sistani ambitions may be complicated by Iraq’s wave of protests since October, which showed a vein of resentment among Shiites to Tehran’s power. Many Iraqis have also been angered at how U.S. and Iranian hostilities have played out on their soil, including last month’s U.S. drone strike that killed top Iranian general Qassem Soleimani in Baghdad.

One cleric in the Shiite holy city of Najaf said he felt “scared for Iraq” when he learned of al-Sistani’s surgery. When he dies, Iran could use its “revolutionary slogans” to try to attract followers to its supreme leader Ayatollah Ali Khamenei, he said.

But he argued that al-Sistani’s support for peaceful protesters strengthened Najaf’s hand among the public against Iran’s forays. “Things weren’t that complicated for Iran” before, he said.

Al-Sistani has been a counterweight to Iran, not only in politics. He represents a school of thought in Shiism opposed to direct rule by clerics, the system in place in Iran, where Khamenei has the final word in all matters.

Al-Sistani and Khamenei both hold the rank of “marja taqlid” — or “object of emulation,” a figure that pious Shiites revere as a spiritual guide. But the majority of Iraq’s Shiites follow al-Sistani, as do many in Iran and around the world.

Fending off Iran is a concern for many in the Najaf Hawza, the esteemed institution of Shiite religious learning from which al-Sistani’s successor will emerge.

“Iran … wants a political stance (in Iraq) that supports it,” said a senior cleric there. “It’s the Hawza that creates balance. Politicians have lost that balance. If the Hawza loses it too, then Iran will have won both on the religious front and on the political front.”

Another senior cleric said “it would be stupid not to worry” about Iran. “But it’s all about resistance. Either an outside body can penetrate, or you can stop it.” All the clerics spoke to The Associated Press on condition of anonymity because of the sensitivity surrounding succession and because Hawza senior clergy rarely talk to the media.

Al-Sistani doesn’t make public appearances and doesn’t deliver sermons — his messages are put out by intermediaries.

He has been recovering from his surgery and this month has resumed receiving visitors at his modest home near Najaf’s gold-domed Imam Ali Shrine.

An AP reporter had a rare visit with him in July. With a scorching Najaf sun beating down, scores lined up outside the narrow alley leading to his home. In a sitting room, al-Sistani spoke with the reporter softly and deliberately in accented Arabic, a relic of his Iranian origin. A dark robe draped around his slender, slightly hunched figure, he made eye contact and gesticulated with one hand, seemingly in good health.

Despite the modest trappings, al-Sistani is a larger-than-life figure to whom millions of Shiites look for guidance on even the smallest questions of life.

Under his leadership, the Hawza’s ranks swelled after dwindling under the repressive rule of Saddam Hussein. Would-be Shiite clerics from around the world flock to the Hawza, learning from the faith’s most respected scholars, whose influence, in turn, resonates around the Shiite community. Religious classes are dispersed among mosques or buildings in the run-down alleys of Najaf’s Old City.

The Hawza prides itself on its independence, governed by centuries-old traditions and unwritten rules. Status is earned by years of building up a reputation for religious knowledge and respect among students and peers.

The system for al-Sistani’s succession is complex and informal: no one is “appointed” and there won’t be an immediate declaration of a successor. It can take months or even years until one cleric garners enough followers and influence to gain consensus as to the new leading “object of emulation.”

A group of the Hawza’s eminent clerics known as “Ahl al-Khibra” or “the people of expertise,” guides the process, steering the faithful toward a figure based on piety and superiority of knowledge.

The most likely contenders, if they outlive al-Sistani, are two grand ayatollahs — Afghan-born Mohammed Ishaq al-Fayadh, who is 89 or 90, and Najaf-born Mohammed Saeed al-Hakim, who is in his 80s. Given their advanced age, observers have floated possible candidates from the younger generation.

Al-Sistani’s influential son, Mohamed Reda, could play a role in shaping the succession if he threw his weight behind a candidate who he thinks will follow in his father’s footsteps, said Baghdad-based analyst Sajad Jiyad. “It’s important for him that al-Sistani’s school is cemented.”

Still, some question if a figure as broadly accepted as al-Sistani will emerge or how long that can take. The senior clerics who spoke to the AP — and who belong to the Ahl al-Khibra — were confident the Hawza’s cloistered ways and deeply entrenched traditions were difficult for Iran to penetrate and that no successor can veer far from al-Sistani’s path.

“Our Sunni surroundings won’t allow for Iraq to become a Shiite religious state,” said one of them. “The international community won’t allow for another Iranian copy in Iraq, nor does our social reality,” he added, referring to Iraq’s diverse religious and ethnic groups.

Iran has tried. It was believed to have been trying to build a following in Najaf for an Iranian cleric close to its supreme leader as a potential successor of al-Sistani. But the cleric, Grand Ayatollah Mahmoud Hashemi Shahroudi, died in 2018.

Even as he shunned a direct rule by clerics, al-Sistani weighed in actively throughout Iraq’s turbulent times, helping shape the rise in power of the country’s Shiite majority.

His positions forced Iraq’s post-Saddam American administrators to significantly revise their transition plans. In 2004, it took his return from London, where he was treated for a heart condition, to end fighting in Najaf between a Shiite militia and the U.S. and Iraqi forces.

Still, his influence had limits. He spoke out against reprisals against Sunnis during times of sectarian bloodshed in the mid-2000s but that didn’t stop the vicious killings. In 2014, thousands heeded his calls for Iraqis to take up arms against the onslaught of the Sunni Islamic State group. That helped defeat the militants; but it also filled the ranks of Iranian-backed Shiite militias accused of abuses against Sunnis, which have become a significant political force.

Anger at Iran’s influence has helped fuel the current protest movement, the largest seen in Iraq. Protesters complain of corruption by politicians and many reject both Iranian and American interference.

Al-Sistani has voiced support for the demands of peaceful protesters and denounced the crackdown against them. He has also spoken out against all foreign intervention and called for an Iraq “that is ruled by its children with no role for outsiders in its decisions.” Clerics in Najaf said the word “outsiders” was seen as a harsh message to Iran.

Many protesters view him as a protector and sympathizer. But their attitude is complicated, given many of them dream of Iraq moving beyond sectarian allegiances.

At a march in Baghdad’s Tahrir Square, the epicenter of protests, 24-year-old Yassir Kadhim carried a banner with the cleric’s image.

“As long as he supports the protests, we will continue. We will continue to death … because the blood of martyrs has been spilled,” he said. But while he follows al-Sistani, he said he would carry on protesting regardless.

“I went out for the sake of this homeland, not for anyone’s sake.”

Read Next
China arrests activist who criticized Xi over virus
EDITORS' PICK
Geek out at TOYCON 2022 powered by Smart Signature
Unemployment rate up to 6% in May
Bye bye Boris: UK PM Johnson bows out with regrets but no apologies
House energy committee chair Arroyo bats for cheap electricity
High inflation: Your P1 is now worth only 87 centavos
High-risk pregnancy: Reducing your risk is in your hands
MOST READ
Suspect in grisly killing of missing woman in Bulacan arrested
Kim Atienza’s daughter flaunts bikini body in response to critics of her ‘revealing photos’
Bongbong Marcos’ first order: Abolish PACC, Office of Cabinet Secretary
Ex-Defense chief Lorenzana is the new BCDA chair
Don't miss out on the latest news and information.