LONDON  — Britain issued severe flood warnings Monday, advising of life-threatening danger after Storm Dennis dumped weeks’ worth of rain in some places. A woman was found dead after being swept away by the floodwaters, the storm’s third confirmed victim. 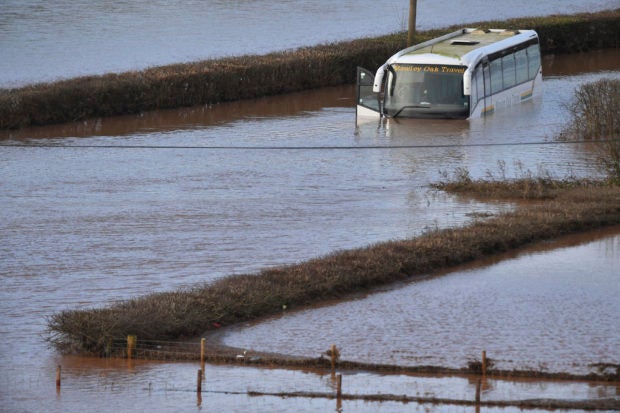 A coach submerged in floodwater from the River Teme near Lindridge, England, Monday Feb. 17, 2020. Storm Dennis hammered Britain Sunday, bringing a month’s worth of rain in just 48 hours to parts of the UK. Rivers across Britain burst their banks and a number of severe flood warnings remained in place as authorities strove to get people to safety and to protect homes and businesses. (Jacob King/PA via AP)

Some 480 flood warnings and alerts were issued across England on Monday, the highest number on record, the agency said.

The storm’s confirmed death toll rose to three as West Mercia Police said a body had been found in the search for a 55-year-old woman who had been missing near Tenbury in Worcestershire since Sunday.

A man pulled from the water in the same incident was airlifted to a hospital, where he remains in stable condition, police said.

The weather system brought winds of more than 145 kph (90 mph) and up to 150 millimeters (6 inches) of rain to Britain over the weekend. And the tumult is not over.

“We expect disruptive weather into the middle of this week bringing a significant flood risk for the West Midlands, and there are flood warnings in place across much of England,” said Toby Willison, Executive Director of Operations at Britain’s Environment Agency.

Forecasters said river levels in parts of northern England had yet to reach their peak. In the northern England city of York, authorities were piling up more than 4,000 sandbags as the Rover Ouse continued to rise. It’s expected to peak on Tuesday.

Other residents in Wales and western England were cleaning up Monday after the storm flooded roads, railways, homes and businesses and disrupted travel across Britain. Some told stories of fleeing for their lives.

Jeanette Cox, 68 and her daughter Rachel woke up to the sound of water in their home in the Welsh village of Nantgarw, near Cardiff, about at 4 am. Sunday. Cox said the only object that survived downstairs was her wedding day photograph that she had kept on a windowsill. Her husband Bill died from cancer in 2009.

“It was pitch black,” she said. “All you could hear was the water running. I’ve never seen anything like it. I was very frightened.”

“We’ll never be able to protect every single household, just because of the nature of climate change and the fact that these weather events are becoming more extreme, but we’ve done everything that we can do with a significant sum of money,” Environment Secretary George Eustice said.

In Germany, at least nine people were injured in weather-related car accidents as high winds brought trees down onto roads and train tracks.
A commuter train with 67 passengers also crashed into a fallen tree in the western German city of Dortmund, but nobody was injured. And in the German city of Hamburg, the city’s famous fish market was flooded for the second time this month.

Further north, strong winds and heavy rains caused flooding, road closures and electricity outages across the Nordic and Baltic regions and forced the cancellation of several ferries between Denmark and Norway.

In Denmark, the southwestern city of Kolding was flooded as gale force winds and heavy rains battered the area. In nearby Horsens, police protectively evacuated residents near Bygholm Lake out of fear that a levee would collapse.

In southwestern Norway, more than half a dozen roads and several mountain passes were closed amid heavy snow and high winds.