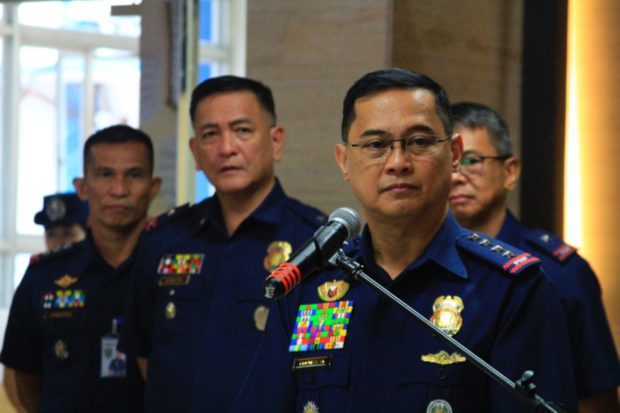 The remaining 47 policemen, 43 of whom have been declared absent without official leave, were a no-show on the Feb. 7 drug test in Camp Crame.

On Monday, Gamboa said one of the 357 policemen in the narcolist was killed two days before the decision to validate their possible involvement in the narcotics trade was announced.

Staff Sgt. Ronaldo Barrameda, a member of the Laguna police drug enforcement group, was gunned down on Feb. 5 in Biñan City. He was previously assigned in Mindanao as a former intelligence officer, during which he reportedly received death threats.

Gamboa said the national adjudication process, which is part of the PNP’s internal disciplinary mechanism, officially began on Monday with the board headed by PNP deputy chief for administration Lt. Gen. Camilo Pancratius Cascolan summoned and met with the policemen.

“We want to show the public that we can pursue internal cleansing and maintain order and discipline in our ranks to earn the trust and confidence of the President and the people,” the PNP chief said.

“We need to act fast and act now on the adjudication of 357 PNP personnel whom I have ordered reassigned to my office to ensure their availability to face further investigation because I do not want to end my term as chief PNP in September without having adjudicated with finality the status of personnel in the drugs watch list,” he said.

He noted that when the 357 PNP personnel were subjected on Feb. 7 to drug tests, 47 of them were absent. Urine samples were taken from the 310 policemen who were present.

“Incidentally all of them tested negative,” he said.

In the case of Lt. Col. Jovie Espenido, despite Duterte’s supportive words, the embattled antidrug crusader is not yet off the hook when it comes to his alleged involvement in the illegal drug trade.

Presidential spokesperson Salvador Panelo said Duterte based his favorable assessment of Espenido on information he had gathered from his sources.

But Panelo also said the President’s position could change if he was given new evidence.

“Any statement that will run counter to subsequent evidence or proof or circumstances that will contradict their previous position on the matter would have to be changed,” he said at a press briefing in Malacañang.

The President relies on the presumption of innocence unless he is shown otherwise, he added.

He also said the President’s praise for Espenido was no reason for the Department of the Interior and Local Government (DILG) to stop its investigation of the people in the so-called narcolist or list of officials linked to the drug trade, which included the controversial police official.

He noted that Duterte’s statement has “obviously” not influenced the DILG or its secretary Eduardo Año, who had stood by the narcolist.

“Secretary Año says we will still investigate, which is the correct position,” he said.

Espenido and the other police officials included in the list have been put on floating status while the validation of the allegations is ongoing.

Earlier, Duterte said he believed Espenido was clean and that his inclusion in the drug list was just black propaganda.

The President had praised Espenido for his work in the administration’s war on drugs.

Espenido was the police chief in Albuera, Leyte, when drug suspect Rolando Espinosa Sr. was killed in his cell by police officers who said they were serving a search warrant.

Espenido was later transferred to Ozamiz City where a police raid led to the killing of Mayor Reynaldo Parojinog Sr., who had been linked to the drug trade, and 14 others.

Panelo also said the narcolist was still “credible” despite the inclusion of Espenido whom the President still believes in.

“The presumption is always that it is credible, until you introduce proof that it is wrong or you were just the target of propaganda,” he said.

He cited as reasons the dismantling of the drug factories, and the arrest of people involved in these groups, the neutralization of drug syndicate leaders, and the disruption of the drug distribution network which led to high street prices of illegal drugs.