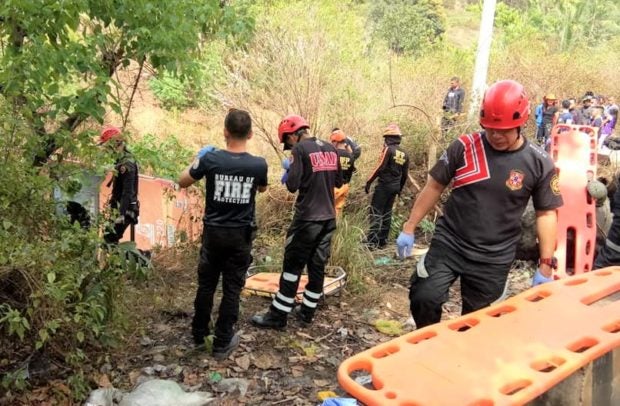 Rescuers try to help passengers of the Super 5 bus that fell off a ravine in Barangay Puerto, Cagayan de Oro City on Monday. PHOTO BY MENZIE MONTES

CAGAYAN DE ORO CITY – A driver was killed when the bus he was driving fell off a cliff in Barangay Puerto here on Monday (Feb. 17), police said.

Rito Reyes, 47, a resident of Bagong Taas, Valencia City in Bukidnon province, was driving a Super 5 bus bound for Cagayan de Oro City when the accident happened past 1 p.m.

Most of the 30 passengers on the bus, including a 10-month-old infant, were injured, according to Maj. Evan Viñas, the city police spokesperson.

Viñas said the bus must have lost its brakes causing it to swerve and hit a tree before careening off into the ravine.

He said Reyes jumped off the bus seconds before it hit the ground and was gravely wounded as a result. He was already lifeless when rescuers found him.

One of passengers told reporters that the bus was running slowly as it negotiated the road’s curve.

The passenger said the driver bailed on them as the bus came barreling down the cliff.

Viñas said all the injured passengers had been confined at several medical facilities in the city. As of this posting, Super 5 has yet to issue a statement.