Various provinces around the country on alert to check the disease’s spread
Philippine Daily Inquirer / 04:18 AM February 17, 2020 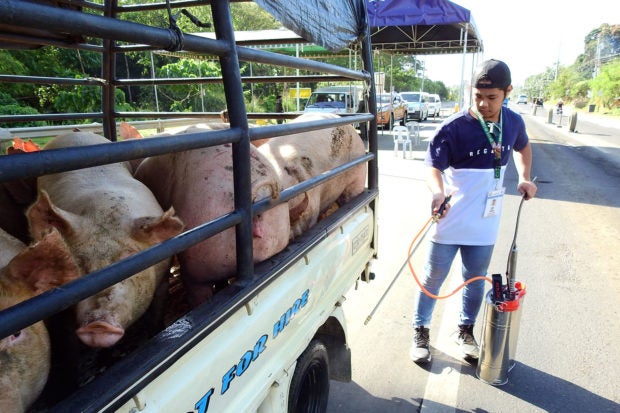 HIGH ALERT Amid strengthened monitoring of swine fever in Mindanao, an inspector of the Davao City veterinary office checks a vehicle loaded with hogs from a farm in Toril District before the vehicle is allowed entry. The city banned live hogs and pork meat products from Davao Occidental following a confirmed case in the province. —BING GONZALES

Authorities continue to monitor African swine fever (ASF) in the country, particularly the northern and southern ends of the archipelago, following reports of their spread in these areas.

In Isabela province, the first cases of ASF were reported in the towns of Mallig and Quirino, near ASF-hit Tabuk City, capital of neighboring Kalinga province, agriculture officials said.

Narciso Edillo, director of the Department of Agriculture (DA) in Cagayan Valley, said checkpoints had been installed in the province to prevent the spread of the disease.

Edillo said the checkpoints were set up at the boundaries of Kalinga, Ifugao and Benguet provinces.

ProceduresRecords from the provincial veterinary office said 77 pigs from backyard piggeries in Bimonton, Casili and Rang-ayan villages in Mallig, and San Miguel village in Quirino had been culled after random samples tested positive for ASF.

Edillo said the infestation in the two towns could be traced to infected hogs in Kalinga.

Agriculture officials in Kalinga said they had started quarantine procedures after tests confirmed that ASF had spread to a mountain community in Tabuk.

Cameron Odsey, director of the DA in the Cordilleras, said some backyard raisers reported hog deaths since November last year. He said 5,000 hogs were raised in Tabuk and were under strict monitoring.

Ahead of resultsIn Pangasinan province, the city council of San Carlos declared a state of calamity early this month, after some hogs at Barangay Caboloan there tested positive for ASF.

In Magsaysay, Davao del Sur, a hog’s death and other symptoms monitored on pigs in Poblacion village prompted the local government to impose a lockdown even before laboratory results could confirm the presence of the ASF virus.

She said 100 hog raisers were gathered at Barangay Poblacion on Saturday, ahead of the laboratory results, and were briefed about the 1-7-10 protocol, which would require the culling of pigs within a kilometer radius from the reported pigs’ death.

“As of now, we have initia¬ted quarantine measures and [a] lockdown was ordered in the Poblacion area,” Carampatana said.

She clarified that the lockdown was only imposed to prevent the movement of pigs in or out of the area.

“This is to protect the swine industry of the municipality from the potential threat of ASF and the resulting economic loss,” Davin said.

The group is tasked to mo¬nitor and inspect all backyards and commercial piggeries in the town’s 22 villages.

Davin also ordered the police to set up checkpoints at all entry points in the town to guard against the possible entry of infected pigs. —Villamor Visaya Jr., Yolanda Sotelo and Orlando B. Dinoy