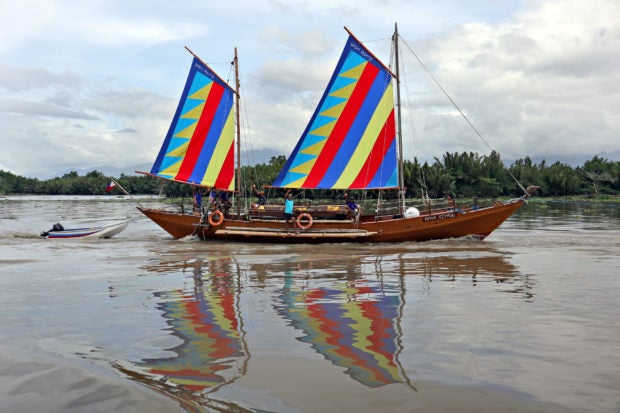 A “balangay” replica sails along the Agusan River. —PHOTOS BY ERWIN MASCARIÑAS

BUTUAN CITY, Agusan del Norte, Philippines — On Dec. 17 last year, two wooden boats docked at the port of nearby Nasipit town, in Agusan del Norte province, the modern gateway for goods and people in the Caraga region. They had earlier sailed from Palawan to Cebu in time for the launching of a 500-day countdown to the 500th anniversary of the Battle of Mactan next year.

The 18-meter and 21-meter boats are replicas of the “balangay,” a vessel used by mariners of an ancient civilization that developed along the mighty Agusan River during the third century. These balangay are navigated through the way of ancient mariners by relying on the position of the sun and stars, wind direction, cloud formations, wave patterns and bird flights.

Tapping the traditional navigational methods would, in a way, “resurrect the seafaring spirit of our forefathers,” leading people to appreciate “what [they were] are capable of doing, … as adventurous seafarers and discoverers,” said Arturo Valdez, who led the crew. 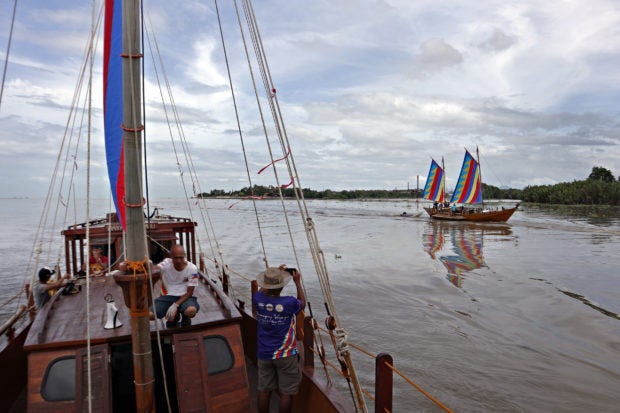 The boats do not have modern navigational aids and are only equipped with small engines for use in case of emergency.“Now I am back here in Butuan City, the home of the balangay, hopefully to stir the conscience and revive the pride, and remind everyone here that the balangay is a Butuan boat, and that Butuan is the balangay,” Valdez said.

In 2006, Valdez organized the conquest by Filipino climbers of Mt. Everest.

To honor their arrival in Butuan, the city government hosted a welcome ceremony for Valdez and his crew.

The balangay, Valdez said, indicated that Butuan was once a center of trade and commerce in this part of the world, long before the arrival of the Spaniards.

Italian chronicler Antonio Pigafetta mentioned about the vessel in his accounts of Ferdinand Magellan’s voyage in the 1500s.

Historians have pointed out that jars found in an archaeological site in Butuan indicated that the city had trading ties with old kingdoms in its immediate neighborhood of Southeast Asia and China, and as far as Persia, now Iran.

“We have a boat that precedes even the Viking ships,” said Valdez, who has been using the balangay voyages since 2009 to talk about the Philippines’ precolonial past and drum up pride in it. 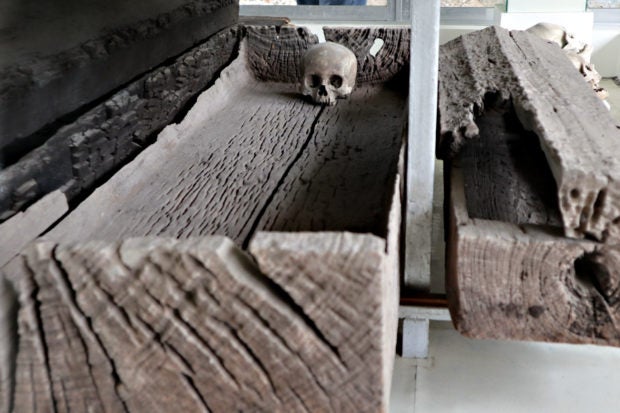 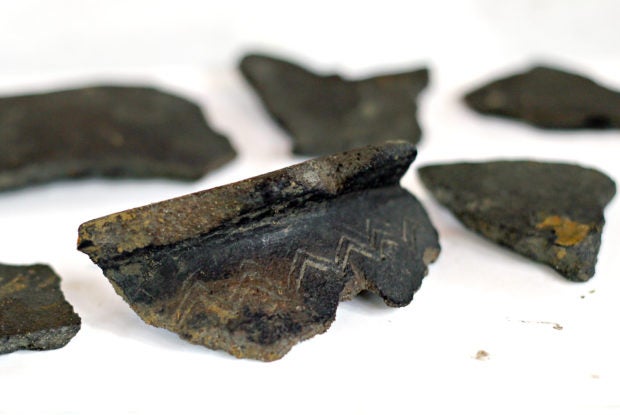 Archaeological excavations in Butuan City unearthed a skull and coffin, dating back to the 14th century, several meters from where an ancient balangay was found. Pottery shards were also recovered from a balangay in 2012.

The oldest balangay unearthed in Barangay Libertad in Butuan dates back to 320 AD. Other finds were dated around 900 AD and 1250 AD.

Treasure hunters discovered the ancient boats in 1976. Experts from the National Museum counted nine vessels, but in 2012, more diggings in the area yielded the tenth.

The boats have been declared national cultural treasures under Proclamation No. 86, issued by then President Corazon Aquino in March 1987.So far, remnants of three boats had been dug. A more complete boat is on display at the Maritime Hall of the National Museum in Manila while another is at a National Museum site in Libertad.

Excavations stopped in 2014 as funding ran short and access problems cropped up as the site sits on private property.

Efforts to revive the balangay legacy came when the three replicas were built starting 2009. The boats set off on a voyage, with Valdez leading the crew that used the traditional navigation methods.

Valdez tapped the centuries-old boat-building knowledge of the Sama people of Tawi-Tawi to build the balangay replicas. He sought permission from the Department of Environment and Natural Resources to harvest local hardwood species, like red “lawaan,” apitong and “yakal,” to build the boats. 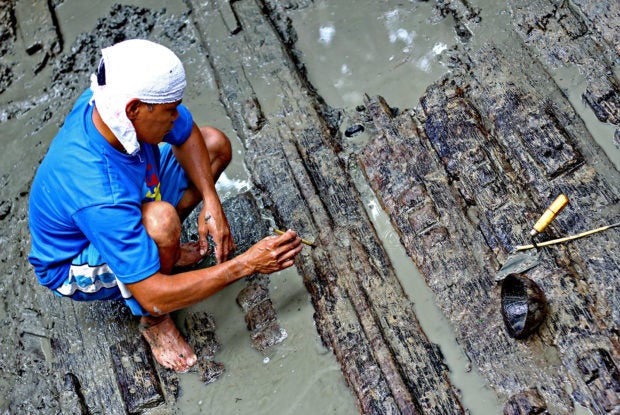 UNEARTHING HISTORY A technician of the National Museum cleans parts of a wooden plank of a “balangay” during an archaeological excavation in Butuan City eight years ago.

Work on one boat, named “Diwata ng Lahi,” was done at the Cultural Center of the Philippines complex next to Manila Bay while two — “Masawa Hong Butuan” and “Sama Tawi-Tawi” — were done in Butuan.

Diwata ng Lahi’s first voyage was on Sept. 1, 2009, sailing from Manila to Butuan and passing by 54 ports. On Feb. 4, 2010, Masawa Hong Butuan joined Diwata ng Lahi in a voyage to Zamboanga City and on to Sulu where the third boat, Sama Tawi-Tawi, caught up with them from Butuan.

By September that year, all three boats journeyed to Brunei, Indonesia, Malaysia, Cambodia, Thailand and Singapore, and back to the Philippines.

After the voyage, the Diwata ng Lahi was loaned to the National Museum as a cultural exhibit. So was the Masawa Hong Butuan in Butuan.

Two more balangay were built in 2016 for a journey to commemorate the 600th year since the 1417 voyage of Sulu Sultan Paduka Pahala, popularly known as Sultan Paduka Batara, from Maimbung, Sulu, to Dezhou, a city in China’s Shandong province.

For the 500th anniversary of the Battle of Mactan next year, the two replicas were named Raya Siyagu and Raya Kolambu in honor of the kings of Mazaua and Butuan, respectively.

The building of the replicas has always been a private initiative. The first three boats were the fruits of collaboration among the TAO Community of Companies, Butuan Global Forum (BGF) and Kaya ng Pinoy Inc. Sulu Gov. Sakur Tan donated the wood materials, while private donors gave cash.

Valdez and Jody Navarra of BGF cited the need for more support for the maintenance of the balangay as a way of continually reminding Filipinos of their rich history. 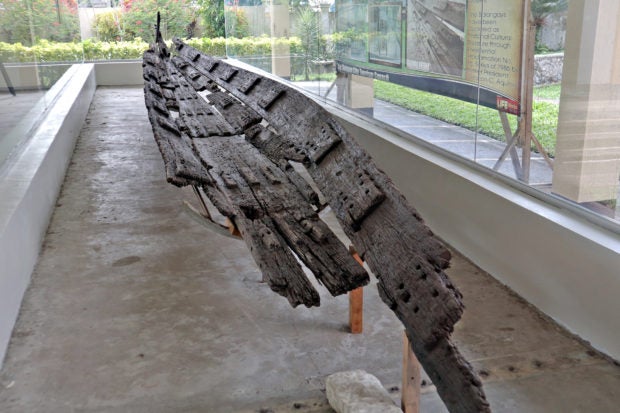 LOCAL TREASURE Remnants of the “balangay,” dated 320 AD, are on display at a National Museum site in Butuan’s Barangay Libertad. —PHOTOS BY ERWIN MASCARIÑAS

Agusan del Norte Rep. Lawrence Fortun, who is pushing for the declaration of balangay as the country’s national boat, said the government should take a big part in funding the initiatives. He also hoped to have the private estate in Libertad declared a national historical site so that full development could be undertaken, and to hasten the settlement of ownership over the land.

Butuan Mayor Ronnie Vicente Lagnada promised to keep the balangay legacy alive by building more replicas. Tours along the Agusan River using the balangay are already being planned, he said.

“It’s been more than a decade … I think it is time to pass on the torch and I think there is no other better place to pass this on than to the people of Butuan, to the home of the balangay,” Valdez said.