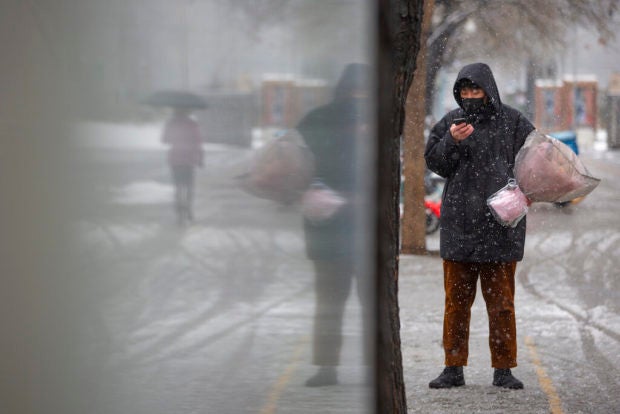 A man wearing a face mask holds a flower bouquet as he stands along a street in Beijing, Friday, Feb. 14, 2020. China on Friday reported another sharp rise in the number of people infected with a new virus, as the death toll neared 1,400. (AP)

BEIJING  — Infections and deaths from the new virus in China ballooned for a second straight day Friday, on paper at least, as officials near the epicenter of the outbreak struggled to keep up with a backlog of patients’ lab work.

The acceleration in cases was not necessarily an indicator of a surge in the illness known as COVID-19 because the hardest-hit province of Hubei and its capital of Wuhan changed the way it counted cases. But public health experts wrestled with what exactly could be deduced from the numbers given the shift in approach.

“If you change the way you count cases, that obviously confounds our capacity to draw firm conclusions about the effectiveness of the quarantine,” said Dr. William Schaffner, an infectious disease expert at Vanderbilt University in the United States. “We have to interpret the numbers with great caution.”

Confirmed cases of the virus rose to 63,851 in mainland China, an increase of 5,090 from a day earlier, according to the National Health Commission. The death toll stood at 1,380, up 121.

Still, the World Health Organization continued to report lower numbers, standing by the way cases were counted before Hubei’s shift. WHO pressed for more details Friday on the change in tabulating cases. Doctors in Hubei are now making diagnoses based on symptoms, patient history and chest X-rays instead of waiting for laboratory confirmation.

“We’re seeking further clarity on how clinical diagnoses are being made to ensure other respiratory illnesses including influenza are not getting mixed into the COVID-19 data,” said WHO director general Tedros Adhanom Ghebreyesus.

Meantime, the vulnerability of health workers responding to the epidemic was crystalized with other data emerging from China. More than 1,700 medical workers in China have contracted COVID-19 and six have died, according to the health commission, which said it was “highly concerned” by the infections.

WHO echoed that, with Tedros saying more information was needed on when the workers were infected and under what circumstances. Transmissions to front-line health workers can signal problems in infection control policies and signal that a disease is becoming more easily transmissible.

Schaffner said he was optimistic that China’s unprecedented quarantines — putting 60 million people in its hardest-hit cities under lockdown — would help reduce transmissions. But without consistent numbers, he said, it was hard to draw any such conclusion.

“China and the world community would like to restore a sense of normalcy but in order to do that we need to have confidence in what is going on and we’re not there yet,” Schaffner said.

China has come under intense criticism within the country for its response to the crisis and has been the target of complaints from elsewhere too. But WHO’s chief of emergencies, Dr. Michael Ryan, defended China’s handling of the outbreak and its cooperation with others.

“From our perspective, we have a government that’s cooperating with us, that’s inviting in international experts, that’s shared sequences with the world, that continues to engage with the outside community,” he said.

The vast majority of cases are in China but reverberations from the outbreak were felt around the world, with hundreds of infections reported elsewhere.

More than 580 cases have been confirmed outside mainland China, including the first infection on the African continent, reported Friday in Egypt. Experts and African leaders have expressed concern that should the virus spread there, it might wreak havoc among less developed countries with fewer health resources.

There have been three fatalities, in the Philippines, Hong Kong and Japan.