QC court orders arrest of Trillanes, 10 others over ‘Bikoy’ videos 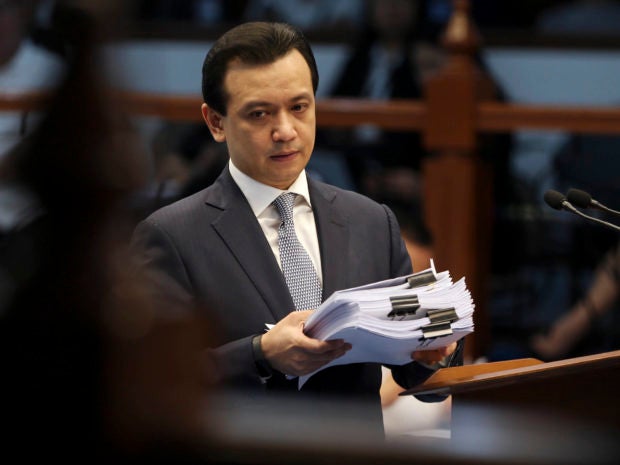 MANILA, Philippines — A Quezon City court on Friday ordered the arrest of former senator Antonio Trillanes IV and 10 others over the widely circulated “Bikoy” videos that linked President Duterte and members of his family to the drug trade.

Prosecutors said Advincula admitted to being the hooded man in the videos, Saracho was the narrator, Enriquez the videographer with his assistant Monique, while Ong and Romano acted as scriptwriters.

Alejo allegedly arranged the recording facilities where the videos were produced while Villanueva supposedly sheltered Advincula during the activity, which was allegedly called Operation Sodoma.

Suarez issued the warrants after the Department of Justice, through Senior Assistant State Prosecutor Olivia Torrevillas, filed on Monday charges of conspiracy to commit sedition after the accused purportedly circulated “malicious and scurrilous libels” against the President and his family.

At least four of the accused have posted the recommended bail of P10,000 at press time.

Trillanes, who was out of the country on Friday, said he would post bail once he returns next week.

“I will face this case just as I have faced all the other harassment cases Duterte’s minions have filed against me,” said the former senator, who is currently a university lecturer.

Trillanes faces two sedition charges. Lawyers Manny Luna and Jacinto Paras filed the first case in 2017 in Pasay City after Trillanes said in a Senate speech that soldiers could use M60 guns on the President.

Luna, who has since been appointed to the Presidential Anti-Corruption Commission, also filed a second case of inciting to sedition against Trillanes for his October 2018 statements that purportedly encouraged the overthrow of the government.

Parasa also filed charges of grave threats against Trillanes in September 2018 after the former senator supposedly threatened to kill Paras after a Senate hearing. The case is pending at the Pasay City Metropolitan Trial Court Branch 47.

According to the DOJ’s court filings, the 11 accused were among 36 others who were allegedly behind the so-called “Ang Totoong Narcolist (The True Narcolist)” videos that went viral between August 2018 and May 2019.

One of the 36, Rodel Jayme, the creator of the Metrobalita.net website where the videos were posted, was arrested and charged with inciting to sedition before Parañaque Regional Trial Court Branch 258 where the case is still pending. Jayme is detained at the city jail.

In filing the charges on Monday, Torrevillas said the department cleared 25 of the 36 of the charge of sedition because of lack of evidence.

Torrevillas explained that the charge of conspiring to commit sedition was easier to prove in court because mere agreement to act together for a common illicit cause was enough to secure a conviction even without having to commit overt acts of sedition.

Under the Revised Penal Code, conspiracy to commit sedition is punishable with prision correccional, or imprisonment of two to four years plus a fine of P2,000.

Meanwhile, Torrevillas clarified that the DOJ has not decided whether to use Advincula as a state witness in the case.

“We will assess the evidence. It is too early for us to tell right now that we will utilize him as one of our witnesses,” Torrevillas said.

Advincula, who had an earlier conviction for estafa, was the main witness of the Philippine National Police-Criminal Investigation and Detection Group when it filed the original sedition complaint against the 33 respondents.