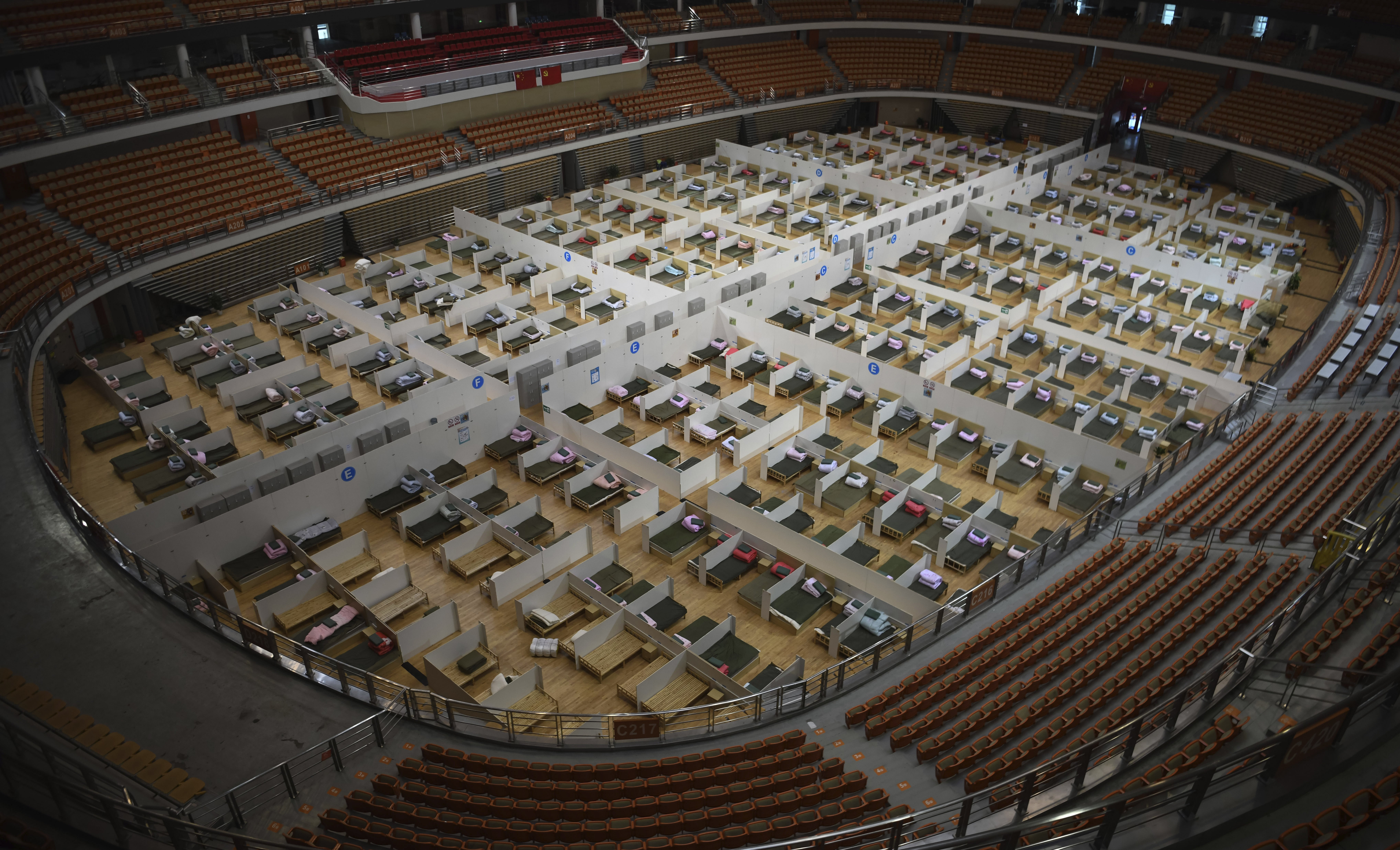 ANOTHER MAKESHIFT HOSPITAL Wuhan Sports Center inWuhan, China, the epicenter of the new coronavirus outbreak, has been converted into a temporary hospital with 1,100 beds. Without enough facilities to handle the number of cases of viral infection, Wuhan has been building prefabricated hospitals and converting a gym and other large spaces to house patients and try to isolate them from others. —AP

BEIJING—China’s official death toll and infection numbers from a new coronavirus spiked dramatically on Thursday after authorities changed their counting methods, fueling concern the epidemic is far worse than being reported.

Two top-ranking politicians overseeing the epicenter of the outbreak were also sacked, adding to questions over China’s handling of the crisis, just hours after President Xi Jinping claimed “positive results” in battling the outbreak.

The World Health Organization (WHO) also quickly countered Chinese reassurances that the epidemic, which has now officially killed more than 1,350 people in China, would peak in a matter of weeks.

“I think it’s way too early to try to predict the beginning, the middle or the end of this epidemic right now,” said Michael Ryan, head of the WHO’s health emergencies program.

The virus has had massive ramifications globally since emerging from the central Chinese province of Hubei last month, with many countries banning travelers from China in a bid to stop people spreading the disease.

Case definition broadenedIn Hubei, where tens of millions of people are trapped as part of an unprecedented quarantine effort, 242 new deaths were reported on Thursday.

Another 14,840 people were confirmed to be infected with the virus, with the new cases and deaths by far the biggest one-day increases since the crisis began.

The jumps raised the death toll to 1,355 and the total number of nationwide infections of the virus officially named COVID-19 to nearly 60,000.

Hubei authorities said the huge increases were because they had broadened their definition for cases to include people “clinically diagnosed” via lung imaging.

Up until now, authorities had been documenting cases using a more sophisticated laboratory test.

The health commission said it looked into past suspected cases and revised their diagnoses, suggesting that older cases were included in Thursday’s numbers.

About 56 million people in Hubei and its capital, Wuhan, are being banned from leaving as part of the quarantine efforts.

Tens of millions of other cities far from the epicenter are also enduring travel restrictions.

China had been praised by the WHO for its transparent handling of the outbreak, in contrast to the way it concealed the extent of the deadly Severe Acute Respiratory Syndrome (SARS) virus epidemic. But it has faced continued skepticism among the global public, and US officials have also called for more openness from China’s Communist Party rulers, leading to fears that there may be similarities with the way it dealt with SARS.

Authorities in Hubei have been accused of concealing the gravity of the outbreak in late December and early January.

The death of an infected doctor who had tried to raise the alarm about the outbreak in December, but was silenced by authorities, triggered an outpouring of anger in China.

On Thursday, the leaders of Hubei and Wuhan were sacked, the highest-profile political scalps of the crisis.

Hubei’s two top health officials had already been sacked this week.Analysts said Hubei’s new methodology to count infections might be for medical reasons and could be because Xi wants officials to be more transparent, but the immediate impact was to sow more distrust.

“It is not clear if the problem up to now, on this issue, was lack of transparency or simply bad medical practice,” Crane said.

Yun Jiang, a China researcher at Australian National University, said the new methodology may be a “practical measure” because Hubei has a shortage of laboratory testing kits.

“I don’t think the numbers are necessarily manipulated for political purposes, but the numbers themselves may not be so trustworthy,” Yun told AFP.

The biggest cluster of cases outside China is on a cruise ship quarantined off Yokohama, Japan, where 44 more people tested positive for the virus, raising the total number of infections on the Diamond Princes to 218.

Of the newly diagnosed cases, 43 are passengers, and one a member of the crew.

Japanese Health Minister Katsunobu Kato said authorities now wanted to move elderly people off the ship if they tested negative for the virus, offering to put them in government-designated lodging.

“On the ship, there are those of advanced age and with preexisting conditions,” Kato told reporters.He said five people from the ship were currently in serious condition, four of whom had tested positive for the virus. Test results for the fifth are still being processed.

In Vietnam, authorities announced on Thursday that they were locking down the commune of Son Loi, a farming region about 40 kilometers from Hanoi, for 20 days. Son Loi has several villages with a combined population of about 10,000.

The locking down of the commune is the first mass quarantine outside China since the new virus emerged in Wuhan in December.

The health ministry previously said five people in Son Loi had been infected with the virus, and on Thursday reported a sixth case.

On Thursday, checkpoints were set up around the commune, according to AFP reporters in Binh Xuyen, a district on the outskirts of Son Loi.

Several countries have banned arrivals from China, while major airlines have halted flights to and from the country, as hundreds of people have now been infected in some two dozen countries.United Airlines extended its China flight cancellations into late April.