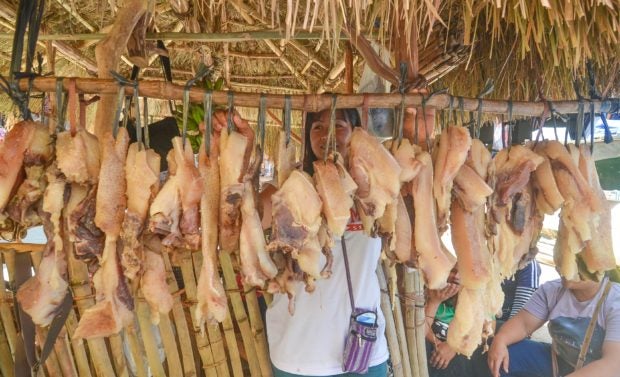 AIR-DRIED “Kini-ing,” salted and sun-dried pork slabs, are prized delicacies in Benguet and nearby provinces that can fetch as much as P300 per kilogram. —KARLSTON LAPNITEN

Cebu province and its capital city have imposed a temporary ban on hogs, pork and pork products from Mindanao to protect the island from the African swine fever (ASF) now affecting the Davao region.

The ban took effect on Feb. 13 and would last for 90 days in the province, and for 60 days in Cebu City, said Cebu Gov. Gwendolyn Garcia and Cebu City Mayor Edgardo Labella.

“Despite the strict measures taken by the provincial government to prevent the entry of the ASF virus into the province of Cebu, there is still a prominent risk of the virus entering Cebu from other areas of Mindanao,” Garcia said in an executive order.

“Since there is a problem in Davao, so better include all from Mindanao,” Labella said, adding that the city has enough supply of pork from local producers.

Garcia said she issued the order after meeting with different stakeholders in the province.

“I listened to their concerns. I gave utmost importance to the question, if we ban pork from Mindanao, will we have enough supply for the Cebuanos?” she said.

“Won’t this lead to an increase in the prices of pork? They (stakeholders) gave me an assurance that as long as the ban will only be for 90 days, then everything is fine.”

She added: “Mindanao is an island, and it is easy to cross boarders from one province to the next. And we know that this bacteria can easily be transmitted through clothing, or tires of vehicles.”

Garcia also issued another executive order to continue indefinitely the ban on hogs and pork products from Luzon, which is also affected by ASF.

Ricardo Oñate, regional DA director, had placed Barangay Palili and Laperas in Sulop on lockdown for suspected ASF cases. He said they were still awaiting the results of samples from Barangay Solongvale, also in Sulop, and Barangay Aplaya in Hagonoy town. The last two villages were also placed on lockdown for possible ASF infection.

Davao del Sur shares a border with Davao Occidental province, where the outbreak of the first ASF cases in Mindanao was reported.

Oñate instructed the provincial veterinarian to immediately implement the 1-7-10 protocol, which included culling of pigs within a kilometer radius of the reported outbreak, and the surveillance of pigs within the 7-km radius.

In Cordillera, DA officials said residents should avoid preserving pork the traditional way as a precaution against ASF.

Jennylyn Dawayan, DA regional technical director for research and regulations, said ASF cases were confirmed last week in blood samples taken from pigs in Tanudan town and Tabuk City in Kalinga province, and in the towns of La Trinidad and Tuba in Benguet province.

Residents in the affected towns were advised to cook pork immediately and thoroughly as only high temperature could sanitize and ensure safe consumption, said Dr. Ofelia Ducayag, head veterinarian of the regional animal disease diagnostic laboratory.

A delicacy in Mountain Province, pork called “etag” is prepared through salting, smoking and sun drying.

However, Ducayag said salting meat only extended the life of this contagious viral disease by up to 180 days. “Drying pork doubles that lifespan while smoking prolongs it by 30 days,” she said.

The cold climate of Benguet is also conducive for the survival of the virus, she said.

Miriam Tiongan, Benguet provincial veterinarian, said 192 pigs from La Trinidad and 35 pigs from Tuba had been culled since Feb. 8. A commercial hog farm owner in Tuba also killed and buried 177 pigs before blood samples were sent for confirmatory tests last week, she said.

There had been no report of culling in Kalinga but 39 pigs from a backyard farm in Tabuk City were reported to have died.

While Benguet had banned the entry of live pigs since Feb. 5, some shippers were transporting the animals using private vehicles to avoid checkpoints, and using fake and tampered documents about the sources of their hogs, according to Gov. Melchor Digas.

In Baguio, the city government also banned the entry of live pigs starting on Tuesday and warned restaurants against selling or giving leftovers as pigswill, which can potentially be a vector of the virus. —REPORTS FROM NESTLE SEMILLA, KARLSTON LAPNITEN, ELDIE AGUIRRE AND ORLANDO DINOY