Duterte tells media: ‘Report the truth even if it destroys me’ | Inquirer News
Close
menu
search

Duterte tells media: ‘Report the truth even if it destroys me’ 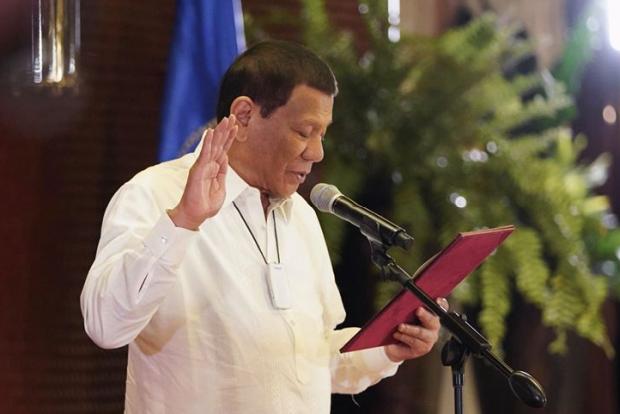 President Rodrigo Duterte administered the oath-taking of newly elected officers and board of trustees of the Kapisanan ng mga Brodkaster ng Pilipinas (KBP) on Wednesday, Feb. 12, 2020. (Photo from the Facebook account of the Presidential Communications Operations Office)

Manila, Philippines — President Rodrigo Duterte on Wednesday asked members of the press to report to the truth, even if it would end up destroying him.

Duterte issued the statement days after Solicitor General Jose Calida moved to stop the operations of media giant ABS-CBN supposedly due to violations of its franchise terms.

“Report to the public because you owe it to the republic to inform them. I’m just asking you to simply [report] the truth. If the truth will destroy me, so be it,” Duterte, speaking partly in Filipino, said before newly-elected officers and Board of Trustees of the Kapisanan ng mga Brodkaster ng Pilipinas (KBP).

“Don’t think twice even if the truth will destroy me. That’s the price of being in public service,” he added.

The President, however, warned that his government would not tolerate “any abuse” of the freedom of the press.

“While our Constitution upholds freedom of the press, the function of broadcast is a privilege granted by government. It is imbued with the best interest of the nation and our people. And we will not tolerate any abuse of that privilege,” he said.

Duterte has repeatedly vowed publicly to put the ABS-CBN out of business due to its failure to air his presidential campaign advertisements in 2016.

Critics are saying that Duterte is on the warpath against ABS-CBN and other media entities critical of his policies, particularly his brutal drug war which has drawn international condemnation.

But Duterte’s spokesman and legal counsel Salvador Panelo maintained that the threats are part of the President’s freedom of expression and had nothing to do with Calida’s work.