Visayas reeling from tourism slump due to viral outbreak 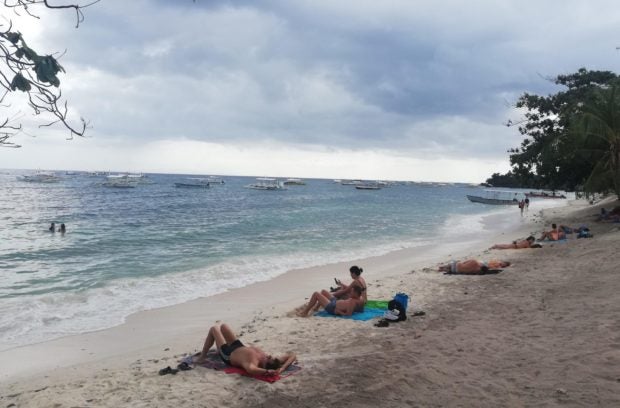 LEAN PERIOD Only a few tourists are left to enjoy Alona Beach on Panglao Island after a ban on Chinese tourists was implemented due to the new coronavirus disease, or COVID-19. —Leo Udtohan

He would only reopen one of Kalibo’s oldest hotels once the new coronavirus disease (COVID-19) was contained.

“There are few guests and what is important is the health and safety of our family, our staff and their families and our guests,” he said.

Garcia said guests from Russia and Japan had canceled their reservations at the six-room mansion amid concern and travel restrictions due to COVID infection.

Travel restrictions and concern over the spread of an illness that has no known cure have hit hard the tourism industry especially in Aklan, Cebu, Bohol, and Negros Oriental provinces, affecting hotels, restaurants and transport services.

Roel, 43, a pedicab driver who made hay driving foreigners to Dauin town in Negros Oriental, complained that he lost his foreign customers because of the coronavirus.

“The town has been quiet since no one was on tour (to nearby Apo Island) anymore due to the virus,” he said.

The phone of a boatman in Bohol had been silent since the COVID scare.

Jun Valeroso, 56, who usually received three group tours a day for whale watching and snorkeling in the waters off Pamilacan Island, had not received any booking.

“I just hope that this situation will be resolved quickly,” said Valeroso whose customers were mostly Chinese.

The Chinese market holds a big chunk among the foreign tourists in the Visayas especially in Aklan, Bohol and Cebu.

In Cebu, Chinese comprised about 30 percent of the foreign market, according to Carlo Anton Suarez, president of the Hotel, Resort and Restaurant Association of Cebu (HRRAC).

He said cancellations and rebookings already reached at least 20 percent as of Feb. 7.

One hotel, he added, lost P10 million worth of bookings due to the cancellations. “I hope it will not reach by March or April because [by then], the damage will be big already,” he told the Inquirer.The decline in tourism arrivals was most visible on Boracay Island, which was supposed to be peaking at this time of the year. Only a handful frolicked the long white beach which used to be crowded with tourists.

Cancellations pushed some hotel and restaurant owners and travel agencies to either lay off workers or temporarily shut down operations.

“We are considering some of our staff especially those in housekeeping to go on forced leave because we have fewer guests,” said a hotel official.

Peter Tay, the Chinese Embassy’s liaison officer in Boracay, said several travel agencies and restaurants found no point in continuing to operate since there were no guests.

Tay said a 300-room hotel, which used to have an occupancy rate of 90 percent, was now down to 20-percent occupancy.

“During the closure of the island [in 2018], we knew when the island would open and activities would return to normal. But this one, we don’t know how long and worse this will get,” he said.

The fear of getting infected also raised apprehensions among residents when they are near tourists. “We feel fear and undue stress. Now we feel utterly vulnerable and paranoid of every tourist,” a resident said.

According to Tay, some Chinese tourists and residents in Boracay feel being discriminated just because the outbreak started in China. “Some of them felt a little bit discriminated by moves to ban them but they respect the government decision and the public sentiment,” he said.

In Bohol, a town mayor has banned Chinese tourists from joining whale watching or snorkeling activities at Barangay Taug in Lila town. Mayor Arturo Piollo II said his order didn’t mean to discriminate against the Chinese.

“We are doing this for the welfare of the people, for all of us,” he added.

Suarez of HRRAC said some Koreans would ask first if Chinese tourists had checked in the hotel before they confirmed a booking. “But we don’t discriminate,” he said, adding that “everybody is equal. We want to bring in more nationalities to Cebu.”

He said while the Chinese comprised about 30 percent of the tourist pie, Cebu is also serving other markets—Americans, Koreans, Europeans, among others.

But Suarez admitted they also experienced cancellations among local tourists who didn’t want to go to Cebu after three Chinese suspected of being infected with the virus had gone to the province.

A Chinese couple arrived in Cebu from Wuhan, the epicenter of the epidemic, before going to Dumaguete City. The boyfriend later died while his girlfriend was still confined in a Manila hospital.

The third case, a 60-year-old woman from Wuhan, also went to Cebu before going to Bohol. She had returned to China after being tested negative. Results in subsequent tests showed she was positive of the virus.

A supervisor of a resort on Panglao Island in Bohol said local tourists canceled their bookings upon learning that the third coronavirus case in the country was in the province.

“They were scared,” Suarez said.

Still, tourism players were banking on domestic tourists to fill in the gap left by the Chinese.

Hoffman of PICCI said they would strengthen domestic arrivals and focus on inviting tourists from European countries.

“We cannot just sit and do nothing,” said Bohol Gov. Arthur Yap, who is expected to resume his post on Feb. 18 after serving a 90-day preventive suspension for his alleged involvement in the Priority Development Assistance Fund scam.

He said they must come up with tour packages to attract the more than 100 million locals who traveled every year.

“We must compete with other provinces in attracting more local and foreign visitors to come to Bohol right away,” Yap said.

Suarez said hotels and resorts have implemented preventive measures against the spread of the virus.

Hand sanitizers and dispensers are available for both guests and staff while housekeeping personnel wear gloves and face masks.

A ground crew member at the airport in Dumaguete City who facilitates passengers at the check-in counter, said the best antidote to the new coronavirus situation is still prayers.

“I just religiously take my vitamins every day, do proper personal hygiene, exercise, but most of all, pray to God—that’s the best medicine we have,” she said.