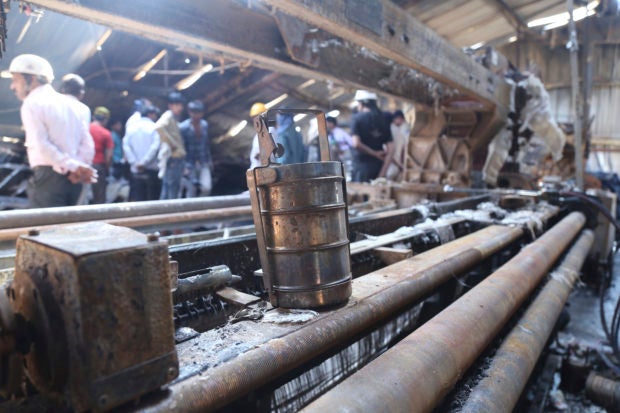 In this Sunday, Feb. 9, 2020 photo, a tiffin carrier belonging to a worker lies amid charred remains after a fire broke out at Nandan Denim, one of the world’s largest denim suppliers, in Ahmedabad, India. At least seven people died in the blaze that swept the factory that has ties to major U.S. retailers, according to its website. Some of the U.S. and multinational companies listed on the website said they were not actually customers, and many issued statements that strongly condemned dangerous work sites. (AP Photo)

NEW DELHI — Shouting and crying, workers in an Indian denim factory struggled to claw their way up a ladder to a door, their only exit as a fire blazed through fabric and machinery, officials said. Seven people died in the weekend blaze, and families were still waiting on Wednesday to recover loved ones’ bodies.

“Smoke kept billowing from the building as workers trapped inside screamed for help,” said one eyewitness who spoke on condition of anonymity because he was worried he’d lose his job.

The factory where the fire occurred, Nandan Denim, has ties to major U.S. retailers, according to its website. Nandan says it supplies jeans, denim and other garments to more than 20 global brands including popular U.S. companies like Target, Ann Taylor, Mango and Wrangler, and its sister company supplies Walmart and H&M.

Some of the U.S. and multinational companies listed on the website said they were not actually customers, and many issued statements that strongly condemned dangerous work sites. Nandan Denim is one of the largest denim suppliers in the world.

The fire broke out Saturday in its two-story factory on the outskirts of Ahmedabad, a fast-growing city of 8.6 million in western Gujarat state. The city’s industrial area, once covered with mountains of garbage, has slowly shifted into a hub for factories that make clothes sold to brands across the world.

Rajesh Bhatt, a senior fire official at the scene, told The Associated Press that the factory had just one door that could only be reached by climbing a steep ladder. The workers, Bhatt said, were resting after long shifts when the fire started.

“There were hardly any means of escape from the blaze,” said Bhatt.

Police investigators said the factory had violated multiple regulations and the owner, a manager and a fire safety officer have been arrested.

Local safety and health authorities have asked the company to close until further notice. Its licenses have been suspended, and Nandan Denim has agreed to pay the families of those killed a reported $14,000 each.

Purvee, a factory spokeswoman who goes by only her first name, did not explain how it started but called the fire “unfortunate.” Factory officials would not comment on whether they had undergone required audits and reviews.

Surviving workers, who are paid about 35 cents per hour, said conditions had been dangerous.

“We work almost 14 hours a day. But do we have an option?” said Vimalbhai, a textile worker, who goes by only one name. “Every once a while there is a fire in some factory or the other. Nobody cares and we keep on working.”

Some workers said they were given impossible assignments, stitching more than 400 pieces of garments a day. This forced many of them, mostly women, to work at a frantic pace, often forgoing meal breaks or using the toilet, said survivors.

One victim, Dayabhai Makwana, 43, made it out alive but went back in to rescue co-workers and perished.

“I wish he hadn’t gone back to save his colleagues,” said his grieving brother Dhanabai Makwana. He said more than 30 workers were in the factory at the time of the blaze.

Sobbing families were still waiting Wednesday outside one of the city’s hospital mortuaries to identify bodies charred beyond recognition. They were told DNA confirmation would not come before Friday.

“We can’t even mourn our dead because we don’t know which one is ours,” said Mahesh Patel, whose nephew lost his life in the blaze.

Amar Barot of the Textile Labour Association said working conditions in the textile factories across the city are grim, with rare inspections and few safety norms.

“These incidents are irreversible and only strict monitoring by the government and its agencies can help prevent such disasters,” said Barot.

He also said labor unions across the region have been declining over the last few decades, making it difficult for the voices of workers to be heard.

Some of the major brands contacted, including Ann Taylor, Target, Zara and Pull&Bear, said they are not customers and don’t have a relationship with Nandan Denim. Target said it is working to get its name off their website and out of their annual reports.

Because thread, fabric cutting, weaving, and sewing can be done in different locations, apparel supply chains can be complicated and it becomes nearly impossible to track a specific item to a specific factory.

Joe Fresh, the fashion brand created for Canada’s Loblaw Companies Ltd., said Nandan is not a supplier and doesn’t make their goods. But company officials said they believe one of their approved suppliers has purchased bulk quantities of denim from Nandan, and they are further investigating. Target and others did not respond to queries about whether their authorized suppliers may have purchased denim from Nandan.

Zara’s parent company Inditex said Nandan Denim has produced 10,000 pairs of jeans for another of its brands, Lefties.

And Nandan Denim’s sister company Nandan Terry supplies towels and linens to many U.S. stores including Walmart and H&M, according to ImportGenius shipping records. Those corporations said they would also look into the situation.

Kontoor Brands, a maker of Wrangler jeans, said they last worked with the factory in 2014.

“Our thoughts are with the workers and their families impacted by the tragic situation,” said Kontoor in a statement.

Nandan Denim reported revenues of $218 million last year and said it exports to more than 20 countries and has more than 4,500 employees. Shares of the firm were tumbling after news of the fire.

Scott Nova, executive director of Washington-based Workers Rights Consortium, said: “It does not cost much to put fire exits in a textile factory.”

“Brands and retailers are well aware of the safety risks in the garment and textile industry in India, yet they choose to do business with unsafe suppliers,” he said. “The result is that workers are losing their lives in factory disasters that could easily have been prevented.”

Forty-three people died in a December fire at a factory that produced handbags, caps, and other garments in New Delhi.