BEIJING — Doctors on the frontline of China’s new coronavirus epidemic are facing a daunting task: treat an ever-growing number of infected patients and risk getting infected themselves due to a drastic shortage of masks and other protective equipment.

Tired and understaffed, medical workers have had to deal with thousands of new cases per week in Wuhan, the city at the epicenter of the outbreak that first emerged late last year. 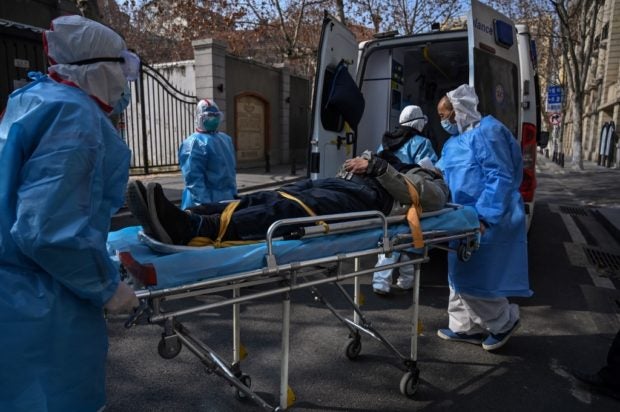 This file photo taken on January 30, 2020, shows medical staff in protective clothes carrying a patient from an apartment suspected of having the deadly COVID-2019 coronavirus in Wuhan, in Hubei province. Doctors on the frontline of China’s new coronavirus epidemic are facing a daunting task: treat an ever-growing number of infected patients and risk getting infected themselves due to a drastic shortage of masks and other protective equipment. (Photo by Hector RETAMAL / AFP)

Many doctors have had to see patients without proper masks or protective body suits, resorting to reusing the same equipment when they should be changed regularly.

Some have even worn diapers to avoid having to take off the equipment and make it last longer, according to a health official.

One doctor at a community clinic in Wuhan said he and at least 16 other colleagues were showing symptoms similar to the new virus, including lung infections and coughing.

“As doctors, we do not want to work while being a source of infection,” he told AFP, requesting anonymity for fear of reprisals.

But “right now, there is no one to replace you,” the doctor explained, adding that all medical staff without fever are expected to work.

“What would happen if there was no one working on the frontline?”

Some 44 percent of the 42,600 cases nationwide – and the majority of more than 1,100 deaths – have been in Wuhan, home to a wild animal market where the virus is suspected of having originated before spreading between humans.

The risks medical staff are facing were highlighted on Friday after Li Wenliang, a whistleblowing doctor in Wuhan, succumbed to the disease more than a month after he first raised alarm about a new SARS-like virus in the city.

His death unleashed an outpouring of grief and anger on Chinese social media, with 10 academics in Wuhan circulating an open letter calling for political reform and freedom of speech.

The deputy mayor of Wuhan said on Friday the city faced a daily shortage of 56,000 N95 masks and 41,000 protective suits.

Medical staff in protective suits will “wear diapers, reduce how much water they drink, and reduce how many times they use the bathroom,” said Jiao Yahui, a top official at China’s National Health Commission.

Some of them will wear the same protective suit for six or even nine hours when they should not be worn for more than four hours in a quarantined ward, she said last week.

“Of course, we don’t advocate this method, but the medical staff really have no alternative,” she admitted.

The Chinese government has responded by mobilizing the entire country to increase the production of masks and suits.

China has also imported more than 300 million masks and about 3.9 million articles of protective clothing since January 24, an official said last week.

The Red Cross Society of China, too, has received over 900 million yuan ($129 million) in donations for epidemic relief – though it has drawn scrutiny for its lack of transparency and efficiency.

“Even if we receive more masks, the number of patients increases even faster,” said a doctor at a major Wuhan hospital, who requested anonymity because she was not authorized to speak with media.

Each doctor or nurse uses two to four masks each day, she explained.

“The consumption of masks in the hospital is enormous,” she emphasized. “They have a permanent lack of masks.”

Doctors have also been forced to don makeshift hazmat suits, which are not adequate protection against the virus, said Xu Yuan, a 34-year-old in the US who donated $5,000 in protective equipment to former classmates working at Wuhan hospitals.

“As soon as he put it on, (the suit) cracked because it was too small for him,” she said, describing a friend in Wuhan – who was also forced to wear the same hazmat suit for five days.

“Every day, he disinfects it after use,” she told AFP.

“He said it may have been useless, but it is still better than nothing.”

Handling the daily deluge of new cases takes another kind of toll too, said the doctor at the large hospital in Wuhan, whose colleagues are handling confirmed cases of virus patients.

“They are exhausted,” she told AFP. One of her colleagues, for instance, works at a clinic that receives 400 patients within eight hours.

Many are dealing with patients “who die very quickly, whom they have not managed to save,” she said.

“They have a lot of pressure,” the doctor said, adding that her hospital had set up psychological monitoring.

Many Wuhan residents are worried, too, said the doctor at the community clinic.

He and his colleagues receive calls from distressed community members, he said – some of whom are too afraid to leave their homes.

“You can hear their calls for help, but your hands are tied,” the doctor said, describing families where patients are stuck at home without medical treatment. “There’s nothing we can do.”