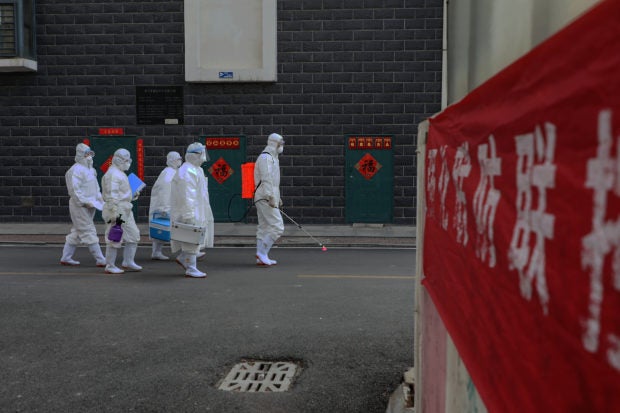 This photo taken on February 10, 2020 shows a laboratory technician making their way during an epidemiological investigation in Linyi in China’s eastern Shandong province. – The death toll from a new coronavirus outbreak surged past 1,000 on February 11 as the World Health Organization warned infected people who have not travelled to China could be the spark for a “bigger fire”. (Photo by STR / AFP) /

In its daily update, Hubei’s health commission also confirmed another 1,638 new cases in the central province, where the outbreak emerged in December.

There are now more than 44,200 confirmed cases across China, based on previously released figures from the government.

The new virus is believed to have emerged last year in a market that sells wild animals in Hubei’s capital Wuhan, the city at the center of the outbreak.

The virus was officially named “COVID-19” at a conference in Geneva held by the World Health Organization, where the body’s chief said countries had a chance of stopping its global spread.

WHO head Tedros Adhanom Ghebreyesus said Tuesday that although 99 percent of cases are in China, where it remains “very much an emergency,” it also “holds a very grave threat for the rest of the world.”

He urged countries to share data in order to further research the disease.

Chinese authorities dismissed two senior health officials from Hubei on Tuesday, where tens of millions of people have been under lockdown since late last month and tightened restrictions in its capital Wuhan.