WHO warns of ‘bigger fire‘ as nCoV death toll passes 1,000 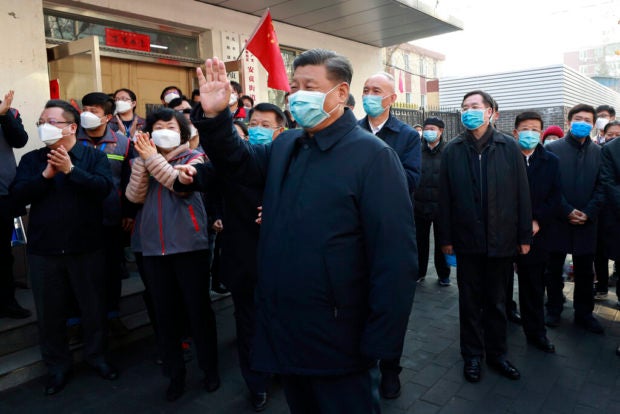 In this photo released by Xinhua News Agency, Chinese President Xi Jinping, centre, wearing a protective face mask waves as he inspects the novel coronavirus pneumonia prevention and control work at a neighbourhoods in Beijing, Monday, Feb. 10, 2020. China reported a rise in new virus cases on Monday, possibly denting optimism that its disease control measures like isolating major cities might be working, while Japan reported dozens of new cases aboard a quarantined cruise ship. (Pang Xinglei/Xinhua via AP)

BEIJING — The death toll from a new coronavirus outbreak surged past 1,000 on Tuesday as the World Health Organization (WHO) warned that infected people who have not traveled to China could be the spark for a “bigger fire.”

The rise came after President Xi Jinping made a rare visit to a hospital in Beijing, wearing protective gear as he chatted with medical workers and patients.

An advance team for a WHO-led international expert mission arrived in China as the country struggles to contain a viral epidemic that has now infected more than 42,000 and reached 27 other countries.

Another 108 deaths were reported on Tuesday, the first triple-digit rise since the virus emerged.

The first death was reported on Jan. 11. The number of deaths has increased a thousandfold in just one month, reaching 1,016, though the mortality rate remains relatively low at 2.4 percent.

The death toll from the new virus has passed the 774 people believed to have died in the 2002-2003 Severe Acute Respiratory Syndrome (SARS), another viral outbreak that originated in China. The total of 40,171 cases on the mainland of the new virus vastly exceeds the 8,098 sickened by SARS.

Chinese authorities have locked down millions of people in a number of cities while several governments have banned arrivals from China, and major airlines have suspended flights to keep the disease away from their shores.

But the case of a British man who passed on the virus to at least 11 other people without having been in China has raised fears of a new phase of contagion abroad.

Most cases abroad have involved people who had been in Wuhan, the quarantined central Chinese city where the virus emerged late last year, or people infected by others who had been at the epicenter.

The adult British citizen, who has not been named publicly, caught the virus while attending a conference in Singapore and then passed it on to several compatriots while on holiday in the French Alps, before finally being diagnosed back in Britain.

Of those infected by the man, five have been hospitalized in France, five in Britain, and one other man on the Spanish island of Mallorca.

“The detection of this small number of cases could be the spark that becomes a bigger fire,” WHO chief Tedros Adhanom Ghebreyesus said on Monday.

“But for now, it’s only a spark. Our objective remains containment. We call on all countries to use the window of opportunity we have to prevent a bigger fire,” Adhanom Ghebreyesus said.

But Michael Ryan, head of the WHO’s Health Emergencies Program, said it was “way too early” to call the Singapore conference a “superspreading event.”

“It is always a concern when people come together and then move apart, and we have to have risk management procedures associated with that but you can’t shut down the world either,” Ryan said.

The British government called the new coronavirus a “serious and imminent threat,” and said anyone with the disease could now be forcibly quarantined if they are deemed a threat to public health as the number of cases in Britain doubled to eight.

A cluster of cases has grown on a cruise ship moored off Yokohama, Japan, with 135 people now diagnosed with the virus aboard the Diamond Princess.

Health Minister Katsunobu Kato said the Japanese government was considering testing all 3,711 passengers and crew on the Diamond Princess, which would require them to remain aboard until results are available. Health authorities were scrambling on Tuesday to deliver medicine requested by more than 600 passengers.

The ship has been in quarantine since arriving off the Japanese coast early last week after the virus was detected in a former passenger who disembarked last month in Hong Kong.

The WHO’s advance team, which arrived in China on Monday, is headed by Bruce Aylward, who oversaw the organization’s 2014-2016 response to the Ebola epidemic in West Africa.

Ryan said the team, which will lay the groundwork for a larger international mission, will seek to better understand “issues around the origin and source of the virus, issues around the severity of the disease.”

Chinese authorities, meanwhile, dismissed two senior officials from Hubei, the central province where some 56 million people, including in its capital Wuhan, have been under lockdown since late last month.

The province sacked the Communist Party head, Zhang Jin, and the director of the provincial health commission, Liu Yingzi.

Local authorities in Wuhan and Hubei have faced a torrent of criticism for hiding the extent of the outbreak in early January. Most deaths and cases are in Hubei.

The death of a whistleblowing doctor from Wuhan has sparked calls for political reform in China. Dr. Li Wenliang had been punished for raising the alarm about the new virus.

Xi who has described the battle against the virus a “people’s war,” has largely kept out of the public eye since the outbreak spiraled across the country from Hubei.

But he emerged on Monday, being pictured wearing a mask and having his temperature taken at a hospital in Beijing.

He called the situation in Hubei “still very grave” and urged “more decisive measures” to contain the spread of the virus.—REPORTS FROM AFP AND AP