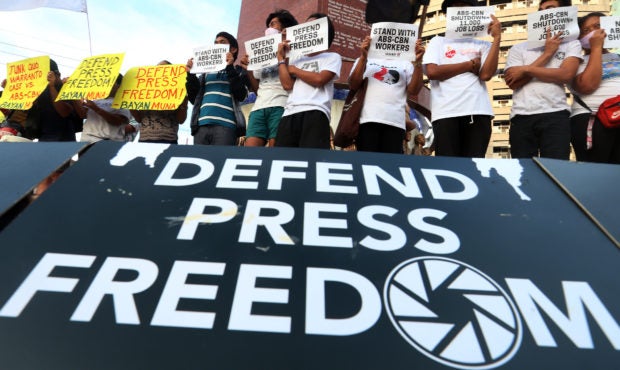 RALLY FOR ABS-CBN Employees of the TV network and their supporters stage a rally at Boy Scout Circle on Tomas Morato Avenue in Quezon City on Tuesday to protest moves aimed at revoking the franchise of the media giant that they claim amount to an attack on press freedom and puts thousands of jobs in danger. —EDWIN BACASMAS

MANILA, Philippines — The ABS-CBN universe does not end after March when its 25-year legislative franchise will have lapsed, according to two lawmakers.

Senate President Vicente Sotto III and Isabela Rep. Antonio Albano said on Tuesday the TV network could still operate as long as bills for the extension of its franchise were pending.

But Senate Minority Leader Franklin Drilon did not think so, saying ABS-CBN would not be able to operate without a renewed franchise.

The two opposing views were aired on Tuesday, a day after Solicitor General Jose Calida asked the Supreme Court to revoke the network’s privilege to operate because it violated the terms of its franchise and the Constitution.

ABS-CBN Corp. said it was compliant with the law and the Constitution.

Acting on Calida’s quo warranto petition, the Supreme Court ordered the broadcast network to respond to his allegations that it violated its franchise conditions and the prohibition against foreign media ownership.

In their weekly full-court session on Tuesday, the justices gave ABS-CBN 10 days upon getting an official copy of the petition to submit its reply.

“As long as there is a pending bill for extension of franchise, they are deemed extended,” said Sotto, who used to head the committee on public services that handles franchises.

This means that if the bill remains pending and is not heard, ABS-CBN could still operate until 2022, when the term of the current Congress ends, Sotto said.

“If it is not approved until March 2022, that is the only time it is terminated,”he added.

Sotto noted that this had been the case in other franchises that were not expressly renewed before these expired.

Albano sought to ease fears that the nonrenewal of the ABS-CBN franchise would cause the company’s immediate shutdown. It can still be allowed to operate while the 18th Congress deliberates on its new application, he said.

Albano said the media giant could request a provisional authority from the National Telecommunications Commission to be allowed to operate pending renewal of its franchise, or until Congress decides to approve or reject it.

Disputing allegations that the House committee on legislative franchises was sitting on several measures for the renewal of ABS-CBN’s franchise, Albano said the panel had been holding closed-door meetings to tackle the matter.

“We assure the public that we will hear the case later,” he said, noting that the committee chair and House leadership had been closely monitoring events. “We have other issues to tackle before we can tackle ABS-CBN.”

House Speaker Alan Peter Cayetano, meanwhile, urged ABS-CBN and the entire media industry to ponder reforms that, he said, were needed for them to better serve God and the Filipino people.

Sotto said that if the House of Representatives did not want to grant ABS-CBN a franchise, it should just deny its application.

The Senate President said he would seek a meeting of the mini Ledac, or Legislative-Executive Development Advisory Council, to determine the position of the House on the issue.

The meeting may take place next week. “At the moment, we’re handcuffed. Until it (the bill on ABS-CBN franchise renewal) reaches the Senate, we can’t do anything about it,”Sotto said.

The Senate is expected to approve the renewal of the network’s franchise, Majority Leader Juan Miguel Zubiri said on Monday. Most senators are in favor of it, he said.

Sen. Nancy Binay is one of those who have spoken up in favor of the franchise, even though she said ABS-CBN had not treated her family well.

“Because it’s not about me,” Binay told reporters.

Binay was also concerned about the thousands of workers in the network who could lose their jobs.

“I’m not comfortable with the idea that we would let the franchise lapse into expiration without having it undergo the proper process. It would seem like we’re not doing our work,” she said.

If there is a problem in the franchise, it could be cured through amendments, she said.

“How can we talk about what needs to be fixed in the franchise if there is no hearing?”she said.

Drilon said the House could not be held accountable for not holding a hearing on the ABS-CBN franchise.

“They are not required to act on this recommendation. This is an exercise of political judgment. The members of Congress are answerable to the people insofar as this is concerned. You cannot even go to court and compel Congress to renew the franchise,”he said.

He said he was baffled by the Office of the Solicitor General’s filing of a quo warranto petition in the Supreme Court, noting that the franchise would expire in a little over a month.

“I don’t think the court can rule on the petition and in 50 days, the issue will become academic if the franchise is not renewed,”he said.

“Now, if Congress will grant the franchise, it must be Congress which will hear of the arguments of the alleged violation of the existing franchise and take this into account in renewing or not renewing the franchise of ABS-CBN. The jurisdiction is with Congress at this point.”

ABS-CBN has been the target of President Duterte’s tirades since he took office in 2016. He has denounced the TV network for not airing his campaign ads even if he had paid for them.

Joining the calls of condemnation of journalists and rights groups, Vice President Leni Robredo on Tuesday called government attempts to shut down ABS-CBN abuse of power.

In a statement, Robredo called on members of Congress to uphold the freedoms of the press and of expression.

“Let us be clear: What is happening now is contrary to the usual process of franchise renewal,”she said. “This is harassment that is being done to serve the agenda of the few in power.”—With a report from Jhesset O. Enano