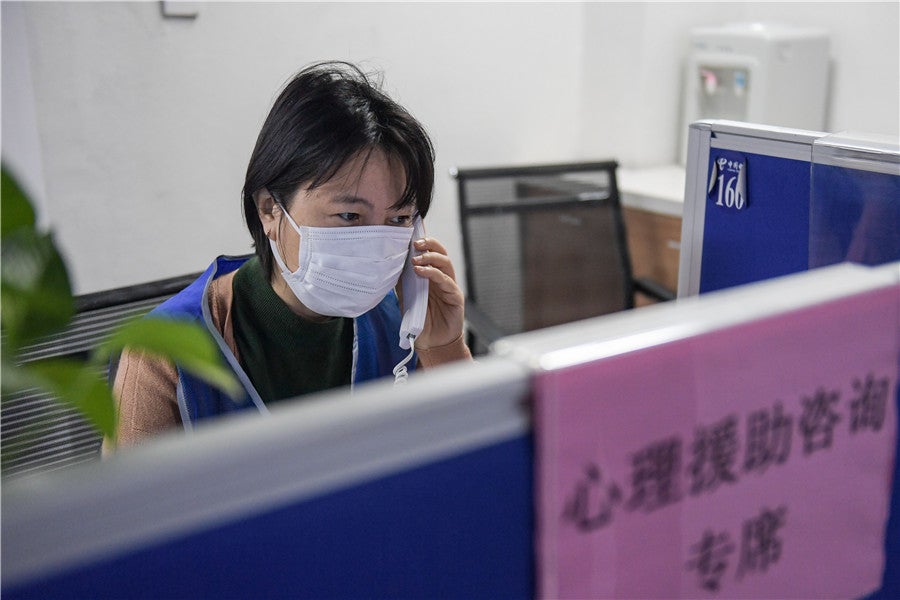 A psychological counselor in Haikou, Hainan province, answers a phone call about the novel coronavirus outbreak on Saturday. [Photo/Xinhua]

BEIJING – The Chinese government and mental health professionals have implemented rapid and comprehensive public health emergency interventions on mental health care to aid the battle against the novel coronavirus outbreak.

Researchers from Peking University reported in the journal Lancet that dealing with public psychological barriers and performing psychological crisis intervention is included in the top-level public health emergency response which has been activated in 31 provincial-level regions.

The National Health Commission has released guidelines for local authorities to promote psychological crisis intervention for patients, medical workers and people under medical observation during the outbreak.

Peking University is preparing a mental health handbook for the public on how to deal with stress and other psychological problems, they added.

The researchers noted that the Chinese government has been striving to improve the public’s awareness of prevention and intervention strategies by providing daily updates about confirmed and suspected cases on websites and social media.

Meanwhile, psychologists and psychiatrists are using online platforms to share strategies for dealing with psychological stress.

Experts from Peking University Sixth Hospital, which hosts the National Clinical Research Center for Psychiatric and Mental Disorders, gave suggestions for the public to cope with mental stress, such as assessing the accuracy of information and maintaining a degree of normalcy under safe conditions.

The experts also suggested the use of psychosocial service systems, particularly telephone-based and internet-based counseling to medical workers, patients, their family members and the public.

The researchers said in the journal that the outbreak of the novel coronavirus in China has caused tremendous mental stress among the public due to factors including concerns about getting infected, misinformation and the misunderstanding of health messages.

For medical workers, the challenges and stress at work and in their daily life could also trigger anxiety, depression or even post-traumatic stress disorder. Xinhua