Expats in China play their part in fighting coronavirus 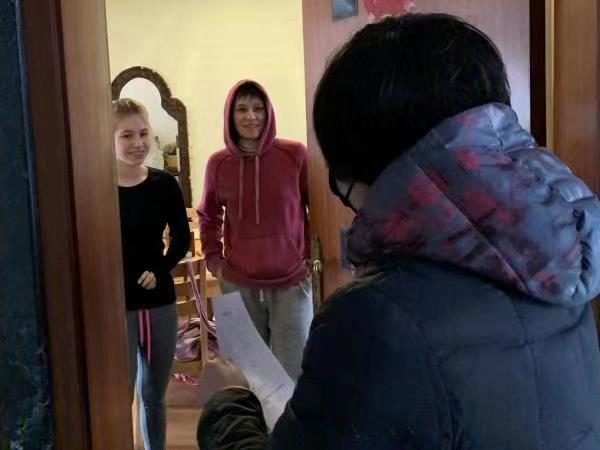 A worker from the neighborhood committee of Yanlord Garden in Shanghai’s Pudong district goes to an apartment of expat residents to inform them of the latest government policies and protection measures amid the novel coronavirus epidemic in late January. [Photo provided to China Daily]

SHANGHAI — In Shanghai’s Pudong district, home to 150,000 expats, foreigners in local communities have shown a great deal of cooperation and participation in the collective fight against the novel coronavirus outbreak, a local official said.

Many of them－residents of the metropolis with the largest number of expats on the Chinese mainland－gave a thumbs up to the city government’s rapid response to containing the spread of the epidemic since late January, its disbursement of transparent information to the public and its care and attention to the foreign community, Chen Bin, deputy director of the Foreign Affairs Office of Pudong District, said on Wednesday.

“Their thoughts and beliefs are no different from those of the local Shanghai residents,” Chen said. “They have paid close attention to the progress of the epidemic and authorities’ rapidly updated measures. They have expressed their confidence that the battle against the virus is destined to triumph with united efforts.”

Since Jan 20, when the first confirmed novel coronavirus infection case was reported in Shanghai, Chen’s team has joined hands with local centers for disease control and prevention to call on expat residents who had recently traveled to or lived in Wuhan－the epicenter of the outbreak and capital of Hubei province－to cooperate with screening.

While communicating with those expats, at least one of the workers speaks fluent English to make sure that the expats fully understand the situation and policy and to address their concerns, Chen said.

“Putting ourselves in their positions, we might also feel nervous when seeing a group of government people, in protective masks and goggles, telling us that we are subject to medical quarantine and observation in a foreign country,” Chen said, adding that workers always try their best to explain the necessity of the medical measures for their own safety and that of society as a whole.

The expats have all cooperated well and agreed to stay in quarantine at home. They are provided with daily necessities and psychological assistance, Chen said.

In some neighborhoods with a high proportion of expat residents, such as Yanlord Garden on Puming Road, there are several expats who work regularly with their neighborhood committee.

They have helped with translating public notices immediately to ensure others stay up to date on the local situation, including those requiring residents who recently traveled to Hubei to report to the local community, those requesting returnees from other provinces and overseas to fill out a personal health information form, and those encouraging people to stay at home once the city elevated its level of public health emergency response.

Some expats in Yanlord Garden also participated in creating a bilingual manual with illustrations to explain to expats what the virus is, why it is important for people to avoid going out and reminders about personal hygiene.

In a WeChat group of around 240 expat residents from 20 countries in the neighborhood, local workers also update them with the latest social policies and information and welcome them to register with the neighborhood committee to buy masks at designated pharmacies when they obtain supplies from official channels, since most drugstores have run out of masks.

“All such efforts are to assist expats to get them rapidly accustomed to the changes that have occurred recently and help them feel safe and reassured,” Chen said.

A 69-year-old Yanlord Garden resident from France, who preferred to be referred to as Paul, said expat residents have praised the local government’s quick response and have been very cooperative in social measures.

“When the local neighborhood started to gather information on residents about whether they had traveled to Wuhan in the past month, the expats spontaneously sent them messages one after another in the WeChat group,” he said.

Home to Pudong International Airport, the district is an important gateway linking Shanghai and other domestic and foreign cities. Chen’s team sends foreigners who do not have a residence in Shanghai to designated venues for medical quarantine and observation if they run a fever or arrive from Hubei.

Seventeen have been quarantined at such venues, with 14 having completed their quarantine period, Chen said.

“Now we are ensuring that we reach a person subject to medical quarantine within 15 minutes of his or her arrival in Shanghai, regardless of the means of transportation, and send him or her to the nearest quarantine venue as soon as possible to maximize the safety and interests of the public, including Chinese and international citizens in the city,” Chen said.

In one case, a man from a Western country, along with his Chinese wife, 2-year-old child and his mother-in-law, all of whom traveled from Wuhan to Shanghai in late January, refused to be quarantined.

They insisted that they were healthy and did not have a fever, and that there was no need for quarantine, Chen said.

“They were concerned about the toddler’s safety in the designated quarantine venue, and the father made requests for vitamins and refused a carpet in the room to prevent allergy,” he said.

With the assistance of the consulate of the foreigner’s home country, Chen’s team eventually persuaded them to accept quarantine after continuous explanations.

“We reassure all the expats that the medical quarantine here abides by international standards and will provide special care for vulnerable groups, such as the elderly, children and pregnant women, if necessary,” Chen said.

Expats said they were impressed with the city authority’s concerns about all residents’ right to know.

The latest social situation, prevention measures and tally of novel coronavirus infections have been being updated for the city’s 220,000 expat residents via a column in five languages－Chinese, English, French, Japanese and Korean－on the website of Shanghai’s Foreign Affairs Office since Feb 1.

Expat residents in the city can also dial 12345 to inquire about prevention rules and methods, and answers will be available in seven foreign languages.

Singaporean Jessie Panisset and her husband have been residents in Pudong for almost a decade. Panisset, who is fluent in Chinese and highly involved in community management, returned to Singapore for a holiday in mid-January but stayed active online to explain government policies and protection measures to expat neighbors and friends in Shanghai.

“I’ve bought a ticket and will fly back to Shanghai on Tuesday. Shanghai is my second home, and I feel I need to return to help as much as possible,” she said.