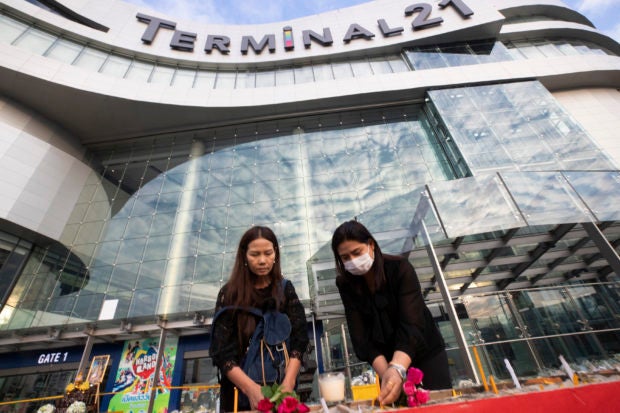 People light a candle at the scene of a deadly mass shooting outside the Terminal 21 shopping mall in Korat, Nakhon Ratchasima, Thailand Tuesday, Feb. 11, 2020. A soldier carried out the country’s worst mass shooting in an hourslong siege at the shopping mall. (AP Photo/Sakchai Lalit)

BANGKOK — Thailand’s army commander said Tuesday the soldier who killed 29 people in a shooting rampage had not been treated fairly in a land deal involving his commander and such arrangements would have to be halted.

The gunman killed his superior officer and the officer’s mother-in-law, stole weapons and a vehicle and headed to a popular shopping mall in a northeastern city where he holed up for hours before security officers killed him.

Gen. Apirat Kongsompong said at a news conference at army headquarters in Bangkok that such arrangements would have to be halted.

“The perpetrator did not receive fair treatment from his superior and the relative,” he said. “They were involved in a land purchase deal that had gone wrong. We will investigate further about who else is involved in the issue. ”

The gunman then stole heavy weapons from an army camp and shot people at random from the stolen army vehicle en route to the Terminal 21 Korat mall in the city of Nakhon Ratchasima. He holed up in the airport-themed mall overnight before security forces cornered and killed him.

Apirat deflected criticism over how the army safeguards its weapons, describing the theft of arms as the criminal act of an individual.

He admitted to shortcomings in some military procedures but said the gunman took advantage of his military rank to confuse guards and gain access to the weapons.

Apirat said the security for arms depots is up to standard but will be reviewed.

Military affairs specialists have suggested systemic problems with the security of army and police weapons, pointing to repeated leakage through theft and force.

The shooting raises serious questions about stockpile security, said Michael Picard, research director of GunPolicy.org who until recently was based in Bangkok.

“It is alarming if that’s all it took – that one guy was tasked with guarding/monitoring a well-stocked armory,” Picard wrote in an email interview. “It’s possible that the assailant used his rank and knowledge of the base to bypass existent controls, but this still shows that the level of control over this base’s armory was woefully insufficient in terms of manpower and access restriction.”

Prime Minister Prayuth Chan-ocha asked Cabinet members and civil servants to dress in black as an expression of sympathy for the shooting victims. He said King Maha Vajiralongkorn has offered royally sponsored funeral rites and cremations for all of the dead.

The death toll of 29 surpassed Thailand’s last major attack on civilians, a 2015 bombing at a shrine in Bangkok killing 20 people that was allegedly carried out by human traffickers in retaliation for a crackdown on their network.

Some of the 58 wounded are still in critical condition.

Thai media reported two people had been arrested for making threats online to carry out similar shootings. One was a former soldier, who told police he had been drunk and arguing with his girlfriend, and the other was a 16-year-old, who told police he posted a threat for fun, the Bangkok Post reported.

Both face charges of violating the Computer Crime Act, which is punishable by up to five years in prison, and causing public fear, which carried a one-month sentence.