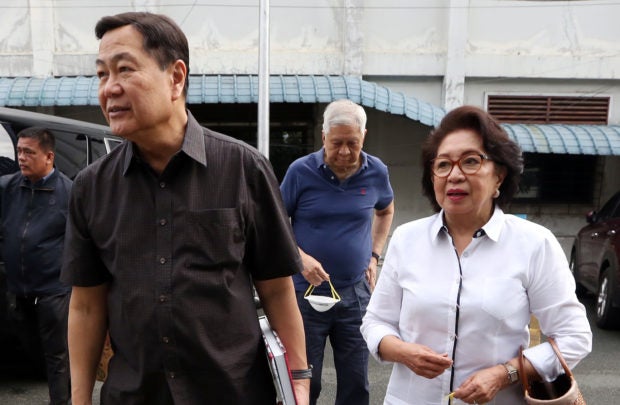 The three former officials arrived at the Philippine National Police Custodial Center at 8:30 a.m. and were with the senator until around 10 a.m.

The visit to the senator at the PNP custodial center was a first for Del Rosario, Morales and Carpio.

“We have long percolated the idea of visiting her (De Lima),” she told the Inquirer.

Asked how the detained senator was, the former Ombudsman said, “She’s OK. She’s in high spirits.”

A source, who requested anonymity because he was not authorized to speak on the matter, said De Lima and her visitors had a lengthy talk.

“They shared some pleasantries and talked about a number of issues,” he told the Inquirer.

The source, however, did not say what issues were discussed.

Del Rosario worked alongside the senator who was then a member of President Benigno Aquino III’s Cabinet as justice secretary.

The former foreign secretary, Carpio and the senator were part of the Philippine legal team that argued the case against China’s claims on the West Philippine Sea before the international arbitral tribunal in The Hague.

On July 12, 2016, the permanent court of arbitration ruled in favor of the Philippines where it said China had no historical right in areas on the West Philippine Sea based on its nine-dash line map.