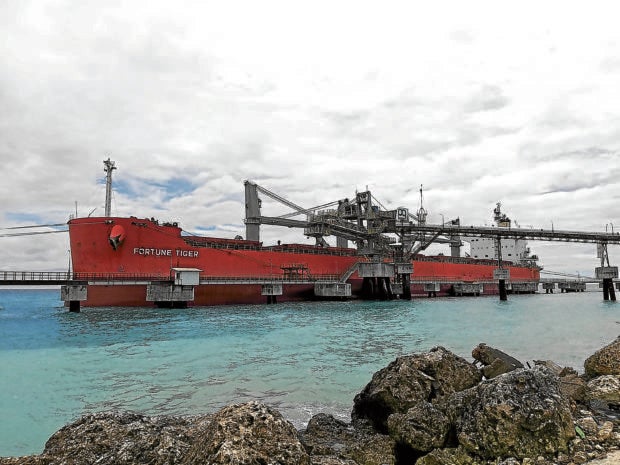 UNDER WATCH The Chinese cargo vessel MV Fortune Tiger docks at a port in Garcia Hernandez town in Bohol on Friday. —LEO UDTOHAN

GARCIA HERNANDEZ, Bohol, Philippines — Residents of this town have expressed apprehension over the presence of an international cargo vessel from China which has docked here since Friday to load limestone.

The threat of infection from the novel coronavirus (nCoV), which originated from Wuhan, China, has led villagers of Barangay West Canayaon to view with suspicion the 22 Chinese crew members who were not allowed to disembark from the vessel.

“Since nobody is really safe from the virus, we keep watch over the boat to ensure that none of the Chinese would leave the vessel,”said the village chief Joeritz Baybay.

The MV Fortune Tiger came from Jinzhou, China, and arrived at the waters of Barangay West Canayaon in this town on Feb. 4 to load limestone at the behest of the Philippine Mining Service Corp. (PMSC), one of two companies mining sedimentary rock in this town now popularly known as “limestone country.”

The vessel’s crew was instructed to stay within 10 nautical miles from the PMSC’s port pending clearance from the Bureau of the Quarantine, according to Baybay.

Quarantine personnel and those from the municipal health office boarded the ship to check on the health of the crew, he added.

Since none of the crew members showed symptoms of the nCoV, the vessel was allowed to drop anchor around 9 a.m. on Feb. 7.

“They were cleared by officials and they had complete papers,”Baybay told the Inquirer.

Still, the presence of Chinese crew members, despite their face masks, didn’t sit well with many of the villagers, with town mayor Tita Baja sending a letter to PMSC resident manager, Engineer Paul Espina, asking him not to allow the crew to disembark.

Baja also instructed Baybay to be vigilant of other foreign vessels docking at the PMSC port, particularly those that came from nCoV-affected countries.

Also on the lookout for foreign vessels docking at its port is San Carlos City in northern Negros Occidental, whose mayor, Renato Gustilo, had issued an executive order directing all vessels from China, Hong Kong and Macau to proceed to the ports of Cebu or Manila in the absence of quarantine facilities and qualified quarantine personnel in his city.

“Under no circumstance must such vessels be allowed to lay, berth, dock or anchor in any part of the territorial waters of San Carlos City, Negros Occidental,”Gustilo said.

Also disallowed from disembarking and ordered to proceed to Cebu was an international cargo ship from the port of Ningde in China, whose 21 crew members — 15 Filipinos and six European sailors — arrived on Feb. 6 and anchored between the San Carlos City port and Sipaway Island.

According to Lt. Cmdr. Jansen Benjamin, chief of the Philippine Coast Guard in Negros Occidental, the ship has no cargo and was supposed to have a cold lay-up, or to park, at the port of San Carlos City pending further notice by its company.

In the mid-70s, Garcia-Hernandez town, which is located some 54 kilometers east of the provincial capital, Tagbilaran City, attracted settlers because of surrounding mountains that contained enormous amounts of high-grade limestone deposits.