Transgender student withdraws after getting accepted to women-only university in S. Korea 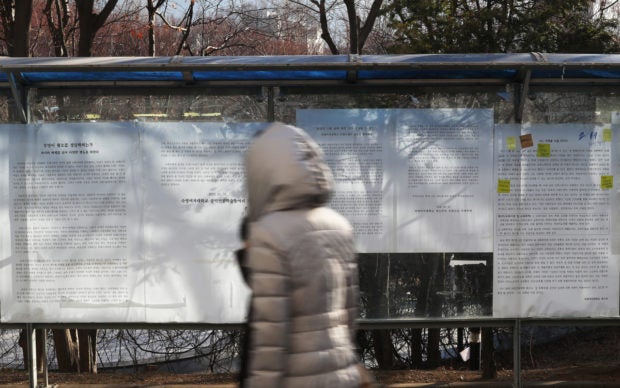 Series of open letters are displayed at Sookmyung Women’s University in Seoul, regarding the acceptance of transgender student. (Yonhap)

SEOUL — A transgender student, the first to gain admission to a women-only university in South Korea, has decided not to attend due to massive opposition from other students, according to media reports last Friday.

“I withdrew my admission, because of growing fears on voices of opposition,” she told Yonhap News.

She also wrote in an online community Friday afternoon, the last day to accept the offer, after withdrawing. “I was scared of the recent situation. I was afraid of the words and actions of those people, who were not allowing me to achieve my hopes, not even the slightest bit,” she said.

The 22-year-old transgender woman, who wished to remain anonymous, received an offer of admission from Sookmyung Women’s University’s law department last week, becoming the first transgender student to be admitted to a women-only university in Korea.

She underwent sex reassignment surgery in Thailand last year. Prior to the national college entrance exam in November, the court approved her legal gender change from male to female in October, which means she was legally allowed to apply for admission.

The university’s unprecedented decision was met with mixed opinions from students, alumni and civic organizations.

While some welcomed the decision, many students at Sookmyung strongly opposed it. Some asked the school to revoke the offer of admission and revise its policy to exclude transgender students.

She is said to be applying to other colleges next year.