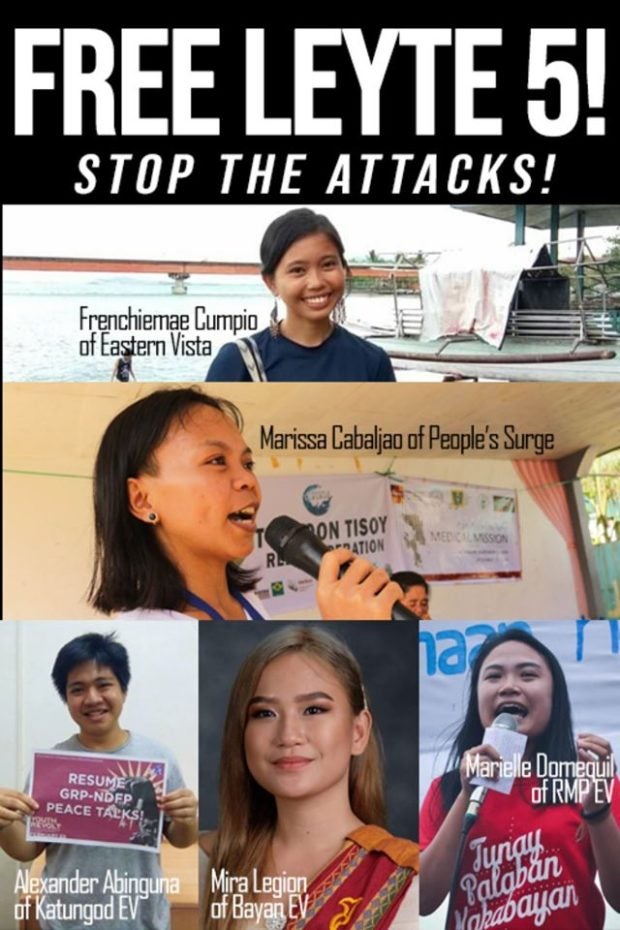 Activist groups as well as the National Union of Journalists of the Philippines (NUJP) demanded the immediate release of a journalist and four human rights advocates who were arrested for alleged illegal possession of firearms and explosives in two simultaneous raids in Tacloban City early Friday morning.

Arrested in the raids conducted by the police and the Army were Marielle Domequil, a staff member of the Rural Missionaries Philippines-Eastern Visayas; Mira Legion, a staff member of Bayan Muna; Alexander Abinguna, secretary general of Katungod-Sinirangan Bisayas; Marissa Cabaljao of People’s Surge and Frenchiemae Cumpio, journalist and executive director of independent news outfit Eastern Vista.

Cumpio and Domequil were arrested at an office in Barangay Calapaniwan where police said they found firearms and ammunition.

Cabaljao was sleeping with her 1-year-old baby when the arresting team arrived, according to the human rights watchdog Karapatan. As of press time on Friday, the infant was with the mother and the four other detainees at the municipal police station in Palo town.Search warrants

The arresting officers were led by Police Lt. Col. Marvin Pedere of the Criminal Investigation and Detection Group of the Philippine National Police. According to the 8th Infantry Division of the Philippine Army based in Catbalogan City, Samar, the raids were conducted based on search warrants issued on Feb. 3 by Executive Judge Eligio Petilla of the Tacloban Regional Trial Court Branch 44. NUJP and Karapatan condemned the arrests, claiming the evidence against the activists were planted.

Karapatan noted that the search warrants were shown to the activists only after they were arrested. Long before Friday’s raids, the group said, it received reports of threats and incidents of harassment directed against the activists and their organizations.

“Today’s arrests and raids should enrage [those] who stand for civil liberties and human rights, social justice and lasting peace in the country,” the group said in a statement. “We are calling on all advocates and communities to defend the rights of defenders against these attacks by the Duterte administration.”

NUJP assailed Cumpio’s arrest as part of the government crackdown on critical voices in the mainstream and alternative media.

“Since last year, the government has no longer bothered to hide the fact that the critical media have been included in their list of ‘enemies of the state,’’ the media group said. “Let us thwart this government’s attempts to muzzle freedom of the press and of expression, without which democracy cannot survive. Let us send out the message that we are free not because anyone allows us to be but because we insist on being free.” Cumpio had suspected state agents of following her and placing her under surveillance since September last year, according to the two groups.

At the House of Representatives, Bayan Muna Representatives Carlos Isagani Zarate and Eufemia Cullamat condemned the raids and called for the immediate release of the five detainees.

Zarate, the House deputy minority leader, said the raids were “part of the renewed crackdown on progressive groups in the country” and “followed the same pattern of mass arrests, then the filing of trumped-up charges based on planted evidence of illegal possession of firearms and explosives.”