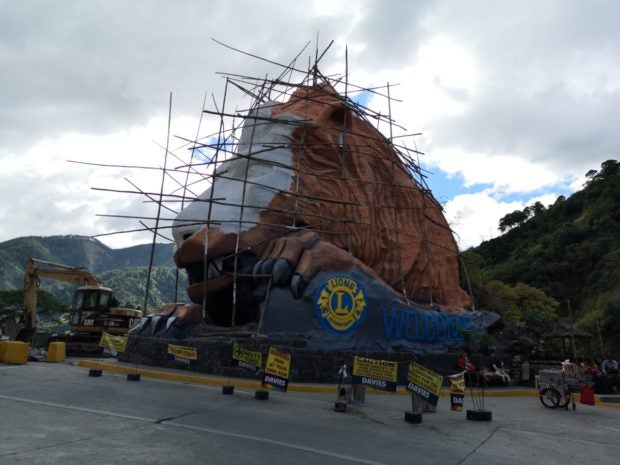 The Lion’s Head along Kennon Road (in this December 2019 photograph) was spruced up for tourists taking the scenic route to Baguio for this year’s February activities like the annual flower festival. PHOTO BY EV ESPIRITU

MANILA, Philippines — Kennon Road, the shortest route in Baguio City, will be open only for light vehicles weighing five tons and below to ease traffic congestion along Marcos Highway, the Department of Public Works and Highways (DPWH) said.

In an advisory on Friday, DPWH- Cordillera Administrative Region (CAR) said Kennon Road will be open to a two-way traffic for weekends from Friday at 6 p.m. to Monday at 6 a.m.

DPWH said they also implemented this traffic scheme as the number of local tourists is expected to increase due to limited access in Tagaytay highlands caused by the Taal Volcano unrest, which is under Alert Level 3.

DPWH also advised that motorists should follow the speed limit of 30 kilometers per hour when traversing Kennon Road.

However, DPWH said Kennon Road will be closed in case of bad weather or localized thunderstorms but only upon recommendation of the DPWH-CAR, Local Government Unit of Tuba, Benguet and Municipal Police Station of Tuba, Benguet.

The traffic scheme, which was recommended by the Inter-Agency Task Group Kennon, began from Jan. 31 (Friday) at 6 p.m. to Feb. 3 (Monday) 6 a.m.