A rapid descent leads to screams on severed Turkish plane

ISTANBUL – As their flight abruptly descended into Istanbul and hit the ground with a rumble, a Turkish couple tensed up. They soon relaxed when they heard a routine announcement telling passengers they could use their cellphones while the airliner raced down the runway. 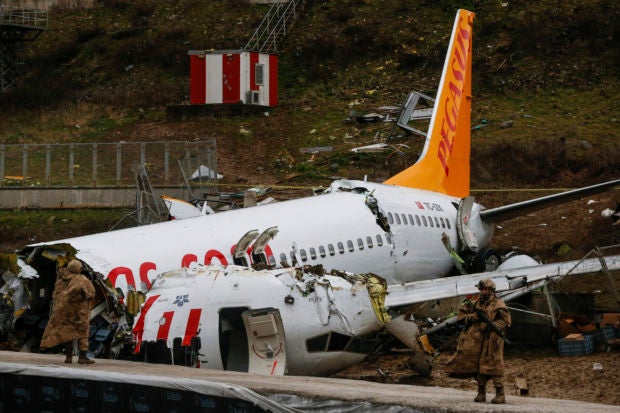 Turkish soldiers guard the wreckage of a plane operated by Pegasus Airlines after it skidded Wednesday off the runway at Istanbul’s Sabiha Gokcen Airport, in Istanbul, Thursday, Feb. 6, 2020. Flights resumed Thursday after the airliner skidded off a runway, killing three people and injuring dozens. The Boeing 737, carrying 177 passengers and six crew members, landed during strong winds and heavy rain, overshot the runway and broke up into three parts upon impact. (AP Photo/Emrah Gurel)

But seconds later, the Pegasus Airlines plane plunged off the asphalt into a ditch and smashed apart, killing three people. The impact that ripped open the plane felt like an explosion.

The tail section where Seref and Rumeysa Demirtas had been seated straddled a retaining wall. They could see the ground.

“That’s when the screams started,” Rumeysa Demirtas recalled from the hospital where her husband is being treated for a broken hip and shoulder.

“People started jumping from the plane from that crack near us, first onto the wall, then to the ground, and running away.”

The crash-landing at Istanbul’s Sabiha Gokcen airport on Wednesday evening killed three Turkish citizens. The remaining 180 passengers and crew members on board were injured when the 11-year-old plane, which came in amid strong runs and heavy rain, skidded off the runway and split into three pieces.

Seref Demirtas told The Associated Press he was nervous when he noticed how rapidly the plane made its approach to the airport and touched down “not gradually, but very quickly.”

“And then when there was an announcement that said, ‘You may now use your cell phones.’ I relaxed. I thought, ‘Everything is fine,'” he said. “Then a few seconds passed, and this time the plane skidded off the runway and hurtled from a height of 30 meters (98 feet.)”

Rumeysa Demirtas described the panic she felt when she saw people fleeing the aircraft squeezing out of the cracks in the plane . She didn’t know if her visually impaired husband would be able to get out. That was before either of them knew about his broken bones.

“One or two people were shouting ‘The plane will explode! Run!’ and I panicked even more ,” she said. “A seat had fallen on my husband and (people) were stepping on it to pass through. I shouted, ‘You’re trampling my husband. Someone help!”

A man who heard her pleas helped extract Seref Demirtas from under the seat. The three of them pulled and pushed until they were out of the plane, off the wall and onto grass.

Other passengers also said the landing felt unusually fast. One, Alper Kulu, told the DHA news agency that the flight was “abnormal from the start to the finish.”

“It was a very turbulent flight. The plane touched down with difficulty. It was very speedy compared to other flights,” Kulu said.

He remembers hearing a voice over the public address system saying “Welcome to Istanbul” after the wheels touched down and the plane swaying left and right before it dropped into the steep ditch. The force was so strong it flipped the fixed seats in front of him completely around.

Kulu said he struggled with a broken arm to get out of the plane quickly and climb up the steep ditch, fearing an explosion and fire.

“There was panic and shouting. Everyone was calling for help,” he said.

Turkey’s Anadolu news agency reported that prosecutors took statements from two air traffic control staff and two airport employees, as well as from the pilots of two other planes who aborted landings shortly before the Pegasus flight landed.

Investigators were looking at many possible causes, including the plane’s speed and the weather at the airport. Pegasus Airlines CEO Mehmet T. Nane told a press conference in Istanbul on Thursday that the plane’s black boxes had been recovered and the data from them deciphered.

“It’s not easy to speak here when there are deaths, damages, injuries,” Nane said, choking up.

“There are tons of questions. How did it happen? Why did it happen?” he said, adding that authorities and the company would share information with the public when it was available.

Pegasus Airlines changed its logo on social media to a blackened version in a sign of mourning and said its “priority is to support the relatives and friends who have lost loved ones.”

The co-pilot of the Pegasus plane was critically injured and receiving treatment at the private American Hospital in Istanbul, according to the Anadolu news agency. Dutch officials said the co-pilot was Dutch. The captain, identified as M.A., was also hospitalized but not as badly hurt.

Nane said the company’s pilots were “encouraged” and trained to avoid risks, do stable approaches, bypass landings if necessary and divert to alternative airports. He said the airline safety’s scores were above European Union standards.

The company is majority-owned by Turkish billionaire Sevket Sabanci and his family, with 34.5% of shares floating on the Borsa Istanbul. Its fleet of 83 planes flies to more than 100 destinations.

Despite Nane’s reassurances, Pegasus has had several recent instances of overshooting runways.

Another Pegasus Airlines plane skidded off the runway at the same Istanbul airport on Jan. 7, causing the temporary closure of the airport. There were no injuries.

In January 2018, another Boeing 737 in the Pegasus fleet slid off a runway at Trabzon Airport in northeastern Turkey. The plane came to rest in the dirt above the Black Sea with its nose pointed toward the water. No one was injured.

Rumeysa and Seref Demirtas say they feel lucky, that their experience could have been much worse.

“When we got off the plane, I looked around and thought, ‘I guess I died,'” Rumeysa Demirtas said. “You know how they say the first to die doesn’t understand that they’re dead? We thought about that because to be able to get out of that plane like that alive, with barely a wound….I said, ‘Miracle.’ I cannot say anything else.”