Another South Korean at Singapore work conference infected with coronavirus 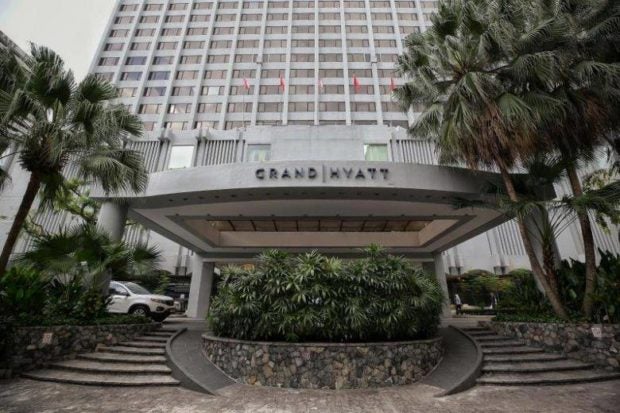 The two South Koreans and a Malaysian contracted the coronavirus infection during a conference at the Grand Hyatt hotel in Singapore. ST/ANN

SINGAPORE — Another South Korean who attended a conference at the Grand Hyatt Hotel in Singapore last month has been infected with the coronavirus.

The Korea Centers for Disease Control and Prevention said yesterday that a 36-year-old businessman from South Korea tested positive for the coronavirus after returning from a trip to Singapore where another South Korean and a Malaysian contracted the disease.

Singapore’s Ministry of Health (MOH) said in an update on Wednesday (Feb 5) that the three cases are linked to a private business meeting that was held at the hotel from Jan 20 to 22.

It was attended by 109 participants from the same company. There were 94 overseas participants, all of whom have left Singapore.

“We have informed the relevant overseas health authorities,” MOH said.

Of the 15 Singapore residents, 11 are well, while four who have reported symptoms have been referred to the National Centre for Infectious Diseases (NCID) for assessment.

Parveen Kumar, the hotel’s manager, told The Straits Times on Tuesday that MOH informed the hotel earlier in the day that a guest had tested positive for the virus more than a week after returning to Malaysia.

“The guest experienced symptoms following his return home and was subsequently diagnosed by the local authorities in Malaysia,” said Kumar.

The hotel has since taken measures such as disinfecting public areas, restaurants, meeting spaces and rooms to ensure the health and safety of its guests and employees, he added.

MOH has not shared details on how, where and when the man was infected, Kumar said, adding that investigations were ongoing.

South Korea reported three new cases of the coronavirus on Wednesday, including the two men who had attended the conference in Singapore.

This brings the total number of confirmed cases in the country to 19.

He tested positive the next day, and is now quarantined at the Seoul Medical Centre.

The other South Korean man who fell ill after returning sought medical treatment and was later confirmed as being infected.

He is now quarantined at Myungji Hospital.

Read Next
4 Chinese tourists isolated for nCoV in Sarangani
EDITORS' PICK
PH COVID-19 cases near 19K mark, as recoveries breach 4,000
Cherry Mobile teams up with Cloud Panda PH, launches online store
Año vows intensified anti-drug campaign as lockdown eases
South Korea clamps down again as virus rebounds
Senate probe on status of PH internet connectivity amid ‘skyrocketing’ demand pushed
Leveling up your ‘lutong bahay’ with the kitchen companion you never knew you needed
MOST READ
Calida ‘just the lawyer, not the client’ and must ‘never lose his cool’ – Macalintal
7 members of nurse’s family in Laguna catch COVID-19
PH COVID-19 cases near 19K mark, as recoveries breach 4,000
Amid protests, Trump talks of war — and reelection
Don't miss out on the latest news and information.