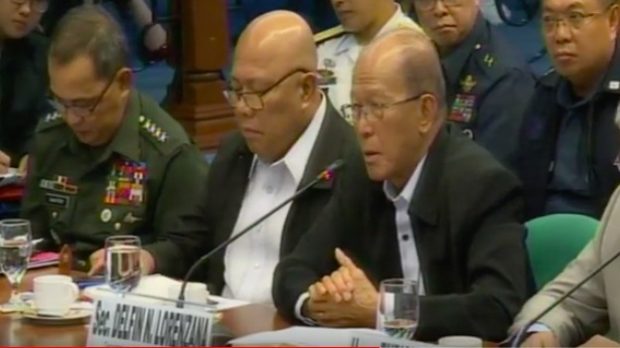 Defense Secretary Delfin Lorenzana speaks during the hearing of the Senate committee on foreign relations. Screengrab from the Senate of the Philippines.

MANILA, Philippines — The United States has rejected a review of its Mutual Defense Treaty (MDT) with the Philippines, Defense chief Delfin Lorenzana revealed on Thursday.

Lorenza said he went to the US last year to push for the review of the 1951 MDT, which calls for both nations to come to each other’s defense against an armed attack.

“For some reasons, the US does not want it reviewed,” Lorenzana said during the hearing of the Senate committee on foreign relations.

He said he sought a review to clarify the “disconnect” in the two nations’ interpretation of the treaty.

“To us, that is our territory, to you it’s not. So there’s a disconnect between our interpretation of the MDT and yours,” he recalled telling his counterpart in the US.

(So that’s what I’m telling them that I want a review to clarify what is really covered by the MDT because for them Scarborough Shoal is not part of the metropolitan Philippines. For us, ever since the Spanish time, it’s part of our territory.)

The disputed Scarborough Shoal (Panatag Shoal) off Zambales province is among the territories being claimed by the Philippines and China.

Lorenzana earlier said that the US’ definition of the metropolitan Philippines only covers the whole country and the islands it occupy, and not those disputed territories.