WASHINGTON — President Donald Trump was gone, the House lights were dimming, and House Speaker Nancy Pelosi looked up to her friends and family in the gallery overhead. 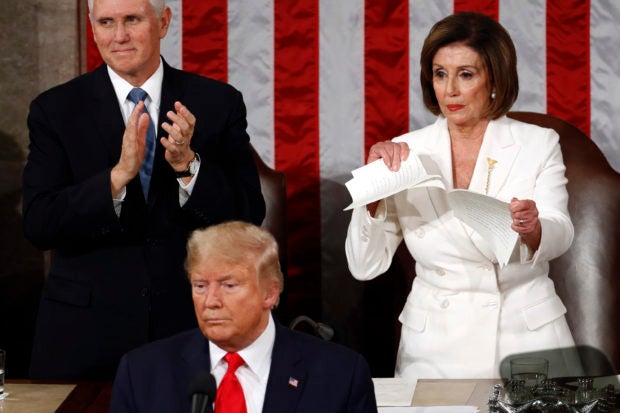 House Speaker Nancy Pelosi of Calif., tears her copy of President Donald Trump’s s State of the Union address after he delivered it to a joint session of Congress on Capitol Hill in Washington, Tuesday, Feb. 4, 2020. Vice President Mike Pence is at left. (AP Photo/Patrick Semansky)

She held up the speech she had shredded behind Trump’s back, on live television. She put her hand to her heart, dipped her head and gave a little bow.

The moment showcased Pelosi’s sharper, less-restrained approach to the nation’s 45th president at the bitter end of the impeachment saga she led.

Now, she’s leading House Democrats out of impeachment’s shadow, through regular legislative business and toward Election Day in November.

And though there’s no sign Pelosi herself is exiting the political stage, there’s abundant evidence that she’s unburdening herself of any lingering restraint when it comes to Trump.

And that’s saying something, considering her unapologetic style when it comes to him. She smirked and clapped, eye-to-eye with him at last year’s State of the Union. In private, she questioned the president’s manhood.

And she stalked out of a White House meeting with him in October, bluntly suggesting the president is controlled by his counterpart in Russia.

But her speech-shredding on Tuesday night appeared to mark a pointier, post-impeachment phase, one Trump’s reelection campaign quickly sought to monetize.

“Wow. Nancy ripped my speech. She truly hates America,” said a text Wednesday as part of an effort to raise $2 million in 24 hours.

As furious Republicans piled on the condemnation, Pelosi brandished the ripped paper in full view of reporters and repeated in the hallways that she “tore it up.”

“I felt very liberated last night,” Pelosi told House Democrats in their private caucus meeting Wednesday, according to a Democratic aide in the room, who spoke on condition of anonymity to discuss the remarks. She said she viewed Trump’s remarks as “a pack of lies” on everything from health care to Medicare and Medicaid.

“We saw the president of the United States shred the truth right in front of us,” she said. “My friends, we just have to declare it.”

That’s what Pelosi said she was doing during Trump’s address to the nation, in which he extolled a “great American comeback” and drew on falsehoods about U.S. energy supremacy, health care and the economy.

Trump was speaking from a place of strength, with the Republican Party mostly solidly behind him, on the brink of his Senate acquittal Wednesday.

For Pelosi and the Democrats, the address was a much more glum event. The party had a political hangover from the debacle Monday night in Iowa, whose kickoff caucuses ended in delays, fury and mockery from Republicans. The House’s impeachment of Trump, with its huge political risks for majority Democrats, was about to be dispatched by the Republican-led Senate. They booed and groaned, but more often, just sat still as Trump spoke.

Trump’s speech Tuesday night on Pelosi’s turf was the first time the two had been in the same room since Pelosi stalked out of the White House meeting in October. It was book ended by competing snubs: Trump appeared to ignore Pelosi’s outstretched hand when he arrived on the podium. She gave a look to her caucus, with a wide grin.

Trump again kept his back mostly turned to her when he finished. Inches behind him, Pelosi gathered the speech’s pages and ripped them — once, twice, three times and a fourth — as he left the chamber. That’s when she held up the navy blue folio with gold letters that contained what remained of the address.

In fact, Pelosi has been freer with her thoughts on Trump and the Republicans for awhile. She was notably less restrained during a Jan. 15 floor speech on the day the House sent the two articles of impeachment to the Senate for trial.
She began by addressing Rep. Doug Collins, a Georgia Republican who had said Democrats are “in love with terrorists” and then apologized for his remark.

“I want to thank the distinguished gentleman from Georgia for his apology for his ridiculous remarks about me and House Democrats,” Pelosi said, looking at Collins.

Then she took aim at Trump’s July 25 phone call that forms the cornerstone of his impeachment case. During the conversation, Trump asked the president of Ukraine to do the “favor” of investigating former Vice President Joe Biden and his son. Pelosi likened Trump’s style to that of the mobsters in “The Irishman” movie.

Then she took a slap at Republicans who had complained that she’d led a rush to impeachment and then slowed down the process by refusing for a month to send the articles to the Senate.

“Don’t talk to me about my timing,” she said, glaring at them from the well of the House. “For a long time, I resisted the calls from across the country for impeachment,” she said. “I held back.”

That changed with the revelations about Trump’s political pressure on Ukraine. The House passed the articles nearly by party line on Dec. 18.

By Wednesday, Republicans were predicting the Democrats would pay a political price for Pelosi’s conduct, which they suggested was a stunt.

“I think it was a new low,” Vice President Mike Pence said Wednesday on “Fox & Friends.” He accused Pelosi of trying to make the evening “about her and I think the American people see through it.”

The Senate cleared Trump on Wednesday mostly along party lines. House Republican leader Kevin McCarthy tweeted a video of himself ripping a piece of paper and saying, “Acquitted for life.”