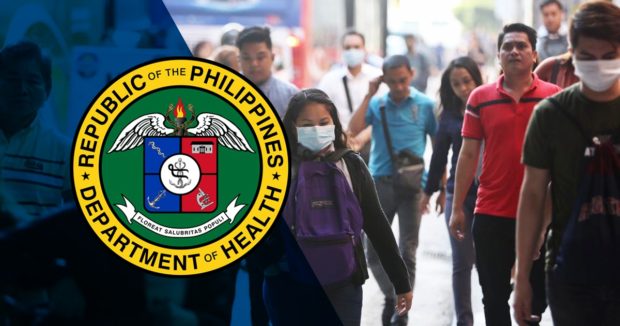 MANILA, Philippines — The Department of Health (DOH) on Wednesday confirmed a third case in the Philippines of the new coronavirus that is spreading from China and has already killed nearly 500 people and infected more than 24,300 others in that country and spread to 25 other countries.

Health Undersecretary Eric Domingo told a news briefing that a 60-year-old woman from Wuhan, epicenter of the outbreak in the central Chinese province of Hubei, arrived in Cebu via Hong Kong on Jan. 20 and went straight to Bohol.

Two days later, Domingo said, the Chinese woman came down with fever and cold, and was admitted to an undisclosed private hospital in Bohol.

But on Monday, results of the RITM’s retest of her earlier samples showed that she was positive for the virus. Those samples were taken on Jan. 23.

As the woman had already recovered and the results of her later tests were negative, she was discharged from the hospital. She left for Shenzhen on Jan. 31.

The RITM is currently testing the samples taken before the Philippines had the capability to check for the new coronavirus. Prior to that, the DOH was limited to sending only six samples to Australia for testing.

Domingo said there was nothing wrong with the tests, only that the patient may have already been toward the end of her illness when samples were taken from her on Jan. 24.

Asked how the woman got past airport screening when she arrived in the Philippines, Domingo said the woman had no symptoms at the time.

“Remember this was Jan. 20. There was no ban on flights, we had very limited information on [the new virus] and it was really tracking patients with fever. This patient had no fever when she passed through [the thermal scanners],” Domingo said.

Chinese authorities locked down Wuhan on Jan. 23, trapping 11 million people. They later expanded the lockdown to other cities in the surrounding Hubei province, restricting the movements of more than 50 million people.

Similar to two earlier confirmed cases, Domingo said the DOH had already instructed its regional office in Central Visayas to look for the people who may have interacted with the Chinese woman during her visit to Cebu and Bohol.

Domingo also called on passengers on the Jan. 20 Cebu Pacific flight 5J 241 “to cooperate with DOH representatives who will be getting in touch with them for assessment.”

He said the DOH had already assessed 203 people who had contact with the Chinese couple from Wuhan who were the country’s first two cases of the new coronavirus.

Of those people, he said, 15 are symptomatic. All except for one have been quarantined for monitoring. Three are health workers.

Five other people who had contact with the Chinese couple were under quarantine at Negros Oriental Provincial Hospital in Dumaguete City.

As of noon on Wednesday, the cumulative number of people observed by the DOH for the new virus had risen to 133. Of that number, 115 were admitted and isolated, while 16 had been discharged but remained under strict monitoring.

Of those under observation, 63 are Filipinos and 54 are Chinese nationals.

Local authorities were observing four people, including a year-old boy, in Quezon and Palawan provinces, for infection with the new virus.

The three adults from Quezon, whose nationalities the authorities declined to disclose, traveled to China recently, while the boy in Palawan is part of a Chinese family from Dalian, China, that is vacationing in El Nido.

In Baguio City, a Filipino woman who had traveled to Hong Kong is quarantined at a local hospital for monitoring for the new virus. In Tarlac province, a patient who had arrived from Myanmar after a layover in Hong Kong is also under observation for infection.

Meanwhile, Domingo said the body of the Chinese man whose death on Saturday became the first outside mainland China was set for cremation on Wednesday.

During a Senate hearing on Tuesday, Health Secretary Francisco Duque III said the cremation was delayed because the Chinese group that earlier committed to handle the process had backed out.

He was accused of “failure of leadership” by Senators Francis Pangilinan and Panfilo Lacson after he said that the DOH had traced only 17 percent of the other passengers on three flights to and within the Philippines taken by the Chinese couple because the airlines had invoked privacy.

The carriers denied the information, saying they had already submitted the lists of passengers to the DOH and the Bureau of Quarantine.

Sen. Ronald dela Rosa suggested that the DOH seek police help in tracking down the passengers.

On Wednesday, the Criminal Detection and Investigation Group of the Philippine National Police began looking for the passengers using flight manifests provided by the airlines.

Duque did not show up at a hearing on Wednesday called by the House of Representatives, sending word that he was going to Fort Magsaysay in Nueva Ecija province to inspect a drug rehabilitation center there that the government was considering using for the quarantine of Filipinos who would be evacuated from Wuhan.

Malacanang said it was “very unfair” to blame the incomplete contact tracing of the other passengrs on Duque, but said the lapses would be rectified.

Read Next
Solons file bills seeking supplemental funds for nCoV response
EDITORS' PICK
Ahead of ONE: Full Blast II, Mongkolpetch warns Elias Mahmoudi: ‘Watch out for my fists’
Synology NAS: A photo storage and multimedia server for your home
DILG takes over Cotabato town as all officials go on quarantine
Local gov’ts may start COVID-19 vaccination of poor residents using excess supply
Tighter curbs sought in provincial COVID-19 hot spots
Alex Eala wins Grand Slam on Independence Day: ‘I hope I made my contribution to the country’
MOST READ
‘Hindi pwedeng take 2,’ Sotto tells presidential, VP aspirants
Lacson: Kind-hearted Leni ‘in it to win’ presidency in 2022, but…
Liza Soberano’s ‘Trese’ stint defended by voice actor Inka Magnaye
Not even found in Tiktik: Another bad word snuck into DepEd materials
Don't miss out on the latest news and information.