German health officials have raised questions about a report that suggested the new virus from China could be spread by people who are not yet showing symptoms. 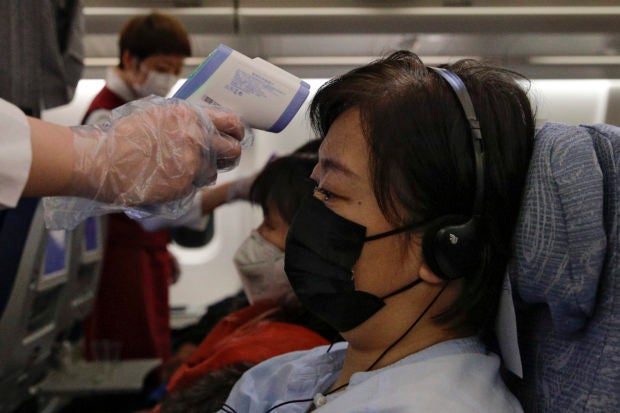 Stewardesses take temperatures of passengers as a preventive measure for the coronavirus on an Air China flight from Melbourne to Beijing before it land at Beijing Capital International Airport in China, Tuesday, Feb. 4, 2020. China said Tuesday the number of infections from a new virus surpassed 20,000 as medical workers and patients arrived at a new hospital and President Xi Jinping said “we have launched a people’s war of prevention of the epidemic.” (AP Photo/Andy Wong)

The report, published last week in the New England Journal of Medicine, raised concerns that controlling the virus will be more daunting if it turns out it is spreading before people know they are sick.

But officials at the Robert Koch Institute, Germany’s public health agency, said Tuesday the woman who set off a cluster of cases was taking anti-fever medicine. Recent interviews with her revealed she “might have had mild unspecific symptoms including back pain,” the institute’s Marieke Degen wrote in an email to The Associated Press.

The paper’s authors hadn’t spoken to the woman, and instead relied on information from other patients, according to the news site ScienceInsider, which first reported the German officials’ comments.

The study was not the only evidence that the virus can spread before a person feels sick. Two other reports from China also have suggested it, said Marc Lipsitch, an epidemiologist at Harvard’s public health school.

“This is still a point of great uncertainty and it’s an important uncertainty,” Lipsitch said.

The mild symptoms described by German health authorities are “about as close to no symptoms as you can get without calling it no symptoms,” he added.

The new virus causes fever, cough and shortness of breath. Some people have had only mild illness. In serious cases, the virus can cause pneumonia. Some patients have needed oxygen.

The medical journal, which published the report Thursday, confirmed it is aware of the new information. “We’re working on it but we’re not yet in a position to make a statement or answer additional questions,” said journal spokeswoman Jennifer Zeis.

The U.S. Centers for Disease Control and Prevention has said travelers returning from Hubei Province will be quarantined, and travelers from other parts of China will be actively monitored with help from state health departments.