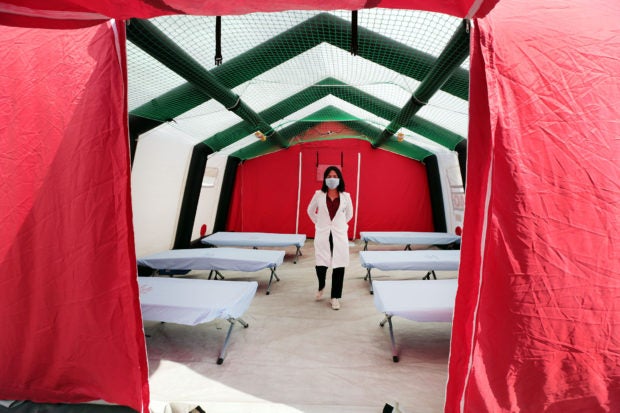 MANILA, Philippines — After the country registered its first confirmed novel coronavirus (also known as 2019-nCoV) case followed by the first nCoV death outside China, local governments in Metro Manila have started implementing precautionary measures to prevent the spread of the disease that has killed over 400 people and infected more than 20,000 others worldwide.

Caloocan Mayor Oscar Malapitan announced that the city government would be distributing around 175,000 bottles of rubbing alcohol to public school students in elementary and high school.

At the same time, Malapitan ordered a special task force to supervise the implementation of preventive measures against the virus.

“The special task force began an education campaign about nCoV to make sure that the city remains nCoV-free,” the Caloocan Public Information Office said.

On Tuesday, the University of the East Caloocan campus required all students to undergo a temperature check through thermal scanning before they would be allowed entry.

“But we have to make it clear that barangay officials should immediately turn over suspected cases to the city government. They should not handle and resolve the situation among themselves,” Gatchalian told officials of the Valenzuela City Disaster Risk Reduction and Management Council in a recent meeting.

The city health office also reminded residents to submit themselves to medical checkups if they develop symptoms of the virus such as fever, dry cough and cold, especially if they had been to Wuhan, China where nCoV originated.

Although there were no suspected or confirmed nCoV cases for now in Navotas City, Mayor Toby Tiangco told reporters that the local government would strengthen its information and education drive about the virus.

“We are also prepared in case the Navotas City Health Office identifies a patient who needs to be transferred to San Lazaro Hospital [in Manila],”he said.

The hospital is one of the accredited medical institutions in Metro Manila assigned to monitor and treat patients with nCoV.

Belmonte said she would visit the Quezon City Medical Center, Rosario Maclang Bautista General Hospital and the Novaliches District Hospital to check on their preparedness.

The hospitals were also given additional safety equipment, including an isolation tent and other paraphernalia, to handle nCoV patients.

“Even without a confirmed case of nCoV in our city, we have to be ready for any eventuality,”Belmonte said. 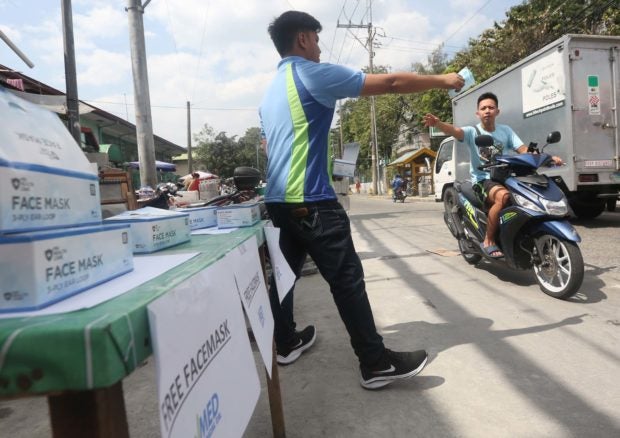 GOOD SAMARITAN An employee of a medical firm hands out free surgical masks to passersby in front of the San Lazaro Hospital in Manila on Tuesday. —MARIANNE BERMUDEZ

Parañaque has announced that it would inspect buildings hosting Philippine offshore gaming operators (Pogos), whose employees were mostly Chinese.

Pogo offices to be inspectedCity health officer Dr. Olga Virtusio told reporters on Monday that they would be conducting sanitary and health checks on all establishments with Pogo workers, as well as hotels where they were staying.

She said she would personally visit these establishments, upon the orders of Mayor Edwin Olivarez, prioritizing the big establishments in the city, including the hotel-casino complexes at the Entertainment City, that cater to a lot of Chinese clients.

Pasig Mayor Vico Sotto, on the other hand, shut down rumors of nCoV cases at the Pasig City General Hospital.

On Sunday, he told his over half a million followers on Facebook that the city was taking precautionary measures, including the installation of a quarantine tent outside the hospital for possible patients.

Pasig also took the additional precaution of requiring all 44 public schools to use infrared thermometers to check the temperature of students and other persons entering the schools.—With reports from Dexter Cabalza and Matthew Reysio-Cruz