MANILA, Philippines — Senators slammed the Department of Health (DOH) for “failure of leadership” when it reported a low outcome in its contact tracing of airline passengers who might have been exposed to the novel coronavirus.

Two Chinese nationals, who tested positive for the novel coronavirus or 2019-nCoV, arrived in the Philippines from Wuhan, China, last January 21 and they had reportedly traveled to Cebu and Dumaguete. One of the two Chinese nationals, a 44-year-old man, died last Saturday.

On Senator Nancy Binay’s queries, DOH Secretary Francisco Duque III informed the Senate committee on health that they only contacted 17 percent or a total of 331 passengers as the airlines were invoking confidentiality.

Dismayed by this low number of contact tracing, Binay said DOH should have coordinated with the Civil Aviation Authority of the Philippines (CAAP) or the Civil Aeronautics Board (CAB).

To ensure that all passengers would be immediately accounted for, Senator Ronald “Bato” dela Rosa suggested that the names of the passengers be given to the police. 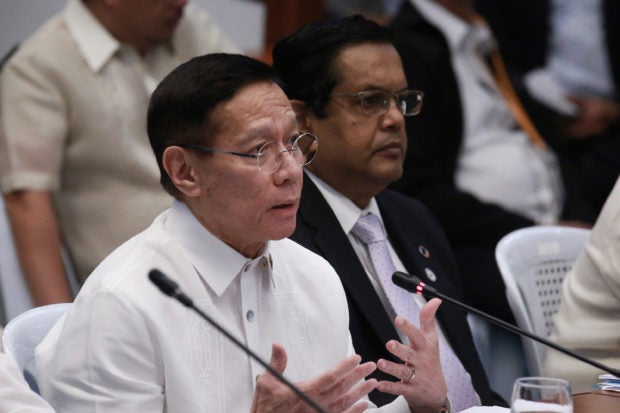 Health Secretary Francisco Duque III (left) calls on the Senate during a public hearing Tuesday, February 4, 2020, to help the health department disseminate accurate information on the novel coronavirus and to support its request for a supplemental budget to combat the disease. Also in the photo is the World Health Organization (WHO) representative to the Philippines, Dr. Rabindra Abeyashinghe. Alex Nueva España/Senate PRIB

“We wanted to find out who’s in charge, who’s accountable,” Villanueva said.

Duque explained that he was not aware there was a problem tracing the passengers as he vowed to look into it.

“Because I can see here an issue of lack of transparency on the part of some of my people here and I’d like to investigate this…” the DOH head said.

Transportation Secretary Arthur Tugade came to Duque’s defense, saying there is “a glaring example of a failure to communicate.”

Tugade said it should be CAAP and CAB that should have initiated the contact tracing since they have the power over the airlines, and not DOH.

At this point, Senator Francis Pangilinan interjected and called out Duque for pointing his finger to his men at DOH.

“I think it’s not just a failure of communication. I think it’s also a failure of leadership on the part of the health department. I’m sorry if I have to put that on record,” Pangilinan said.

“What happens to the principle of unity of command? I thought this is a health issue, and the DOH should be the first line of defense and should be designated as the Office of Primary Responsibility?” Lacson asked.

“You shouldn’t be blaming other people because this is a health issue. And it’s wrong to point to the BI (Bureau of Immigration) and CAAP, it should be the initiative of the DOH. What we have here, as Pangilinan mentioned earlier, is a failure of leadership.”

Lacson said DOH should be in charge and on top of the situation since this matter involves public health.

“Not the CAAP, not the BI, not the DoTr but the DOH,” he stressed.