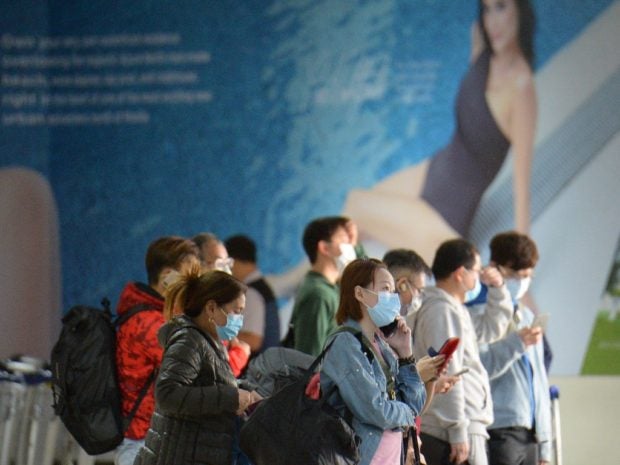 Arriving passengers wearing protective masks wait for their luggage at the international airport in Manila on February 3, 2020. – The Philippines on February 2 reported the first death from the new coronavirus outside mainland China, as China said February 3 it urgently needed medical equipment and surgical masks as the death toll jumped above 360, making it more deadly than the SARS crisis nearly two decades ago. (Photo by Ted ALJIBE / AFP)

LONDON — Companies and tourists out of pocket from the global disruption caused by the virus epidemic in China risk meeting a cold shoulder from insurers, industry experts warn.

Basic travel insurance policies are unlikely to cover epidemics. Instead, individuals are being advised initially to consult their credit card or travel providers to get refunded for cancelled bookings, and for medical costs.

For companies such as airlines that are now ripping up their China plans, there may be no recourse from their insurers, according to Clarissa Franks, risk management placement leader at insurance broker Marsh in London.

“The devil really is in the details because business interruption policies, contingency policies, can cover communicable diseases. However, policy language will quite often exclude this type of disease,” she told AFP.

It is too early to determine overall costs to the insurance industry from the deadly coronavirus spreading out of China, whose death toll has now surpassed that of the Severe Acute Respiratory Syndrome (SARS) outbreak in 2002-03.

The reinsurance market at Lloyd’s of London has not seen any untoward activity from traditional insurers looking to hedge their exposure to risks arising from this outbreak, two sources in the underwriting trade said.

But even if they are not covered for communicable diseases specifically, companies will be checking the fine print as ripple effects flow through their China operations and global supply chains, following Beijing’s decision to quarantine entire cities.

As with SARS and other pandemics of recent years such as swine flu, Zika and Middle East Respiratory Syndrome (MERS), the industry will be “paying very close attention to this”, Association of British Insurers spokesman Malcolm Tarling said.

He cautioned individuals and companies: “If someone travels (to China) against government advice, then most policies will be invalidated. If you believe your trip is essential, you need to talk to your insurer first.”

The closest analogy is SARS, which first broke out in China in 2002 and led to a slew of disputes between companies and their insurance providers.

For the travel industry alone, the impact of SARS was estimated by the World Travel and Tourism Council at $30-50 billion.

But China’s economy accounted for five percent of the global gross domestic product then, compared to nearly a fifth today, according to World Bank data.

More Chinese now travel abroad than any other nationality, and they spend the most on average while away.

The number of infections from the new virus stands at more than 17,200, and the World Health Organization has declared a public health emergency.

But health experts have stressed that its mortality rate among patients is lower than for SARS.

In a blog, Risk Management Solutions noted that several sporting and cultural events have already been cancelled in China, “and all risk stakeholders will be anxious over the number of months before 2019-nCoV (the novel coronavirus) is contained”.

Leading British insurer Aviva said customers need to have specific coverage for “travel disruption” as part of their policy to be sure of reimbursement for changes to their plans.

“We’re monitoring the situation closely, but so far the overwhelming majority of claims relate to customers who are travelling to and from China,” an Aviva spokeswoman said.

Allianz of Germany said the first port of call for individuals suffering disruption should be their airline or travel agency, rather than their insurer.

The company said the outbreak was “clearly a very urgent alert” but at this stage, normal terms and conditions of insurance contracts applied.

For airlines and other companies in the firing line, communicable diseases will typically only be covered if they have taken out specialist coverage.

But that would come at a cost that probably outweighs the risk-benefit return.

“It will be a very bespoke product.”