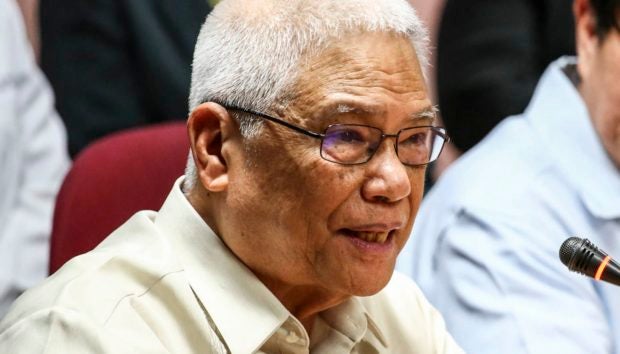 MANILA, Philippines — When former senator and military officer Gregorio “Gringo” Honasan II assumed the top post at the Department of Information and Communications Technology (DICT) on July 1 last year, he vowed to break the mold of policy shifts that typically followed management revamps.

Honasan took the unusual step of naming his immediate predecessor, Eliseo Rio Jr., as undersecretary of operations to ensure “continuity, sustainability and predictability” in the department and also to aid the technical shortcomings he freely acknowledged.

But just seven months later, Rio, a retired brigadier general who oversaw the selection of the third major telco player while he was DICT chief, resigned from the job and disclosed a host of circumstances that painted a very different picture of the governance culture that Honasan vowed to create.

In an interview with the Inquirer on Monday, Rio pointed to the lack of transparency in the disbursement of hundreds of millions of pesos in confidential funds used for surveillance — a function beyond the mandate of the DICT.

Documents from the Commission on Audit (COA), which were seen by the Inquirer, also indicated irregularities with some of those advances.

Rio further cited conflict with new appointees who came in with Honasan.

Left out of decision-making

He alleged that programs related to the government’s Free Wi-Fi program were blocked, only to be resumed later after tense meetings, and that he was left out of key decision-making that was crucial to his role at the DICT.

“I’m supposed to be the undersecretary of operations but I was not involved and have no say in their decisions,” Rio said, while declining to name the officials within the department.

“The salary [the] government is paying me is useless so I might as well resign. I am just a fixture here,” Rio said.

Rio stopped short of alleging corruption at the DICT and said he remained “friends” with Honasan, who declined interviews for this report.

He also hoped to have a meeting with President Rodrigo Duterte “for a chance for me to tell him privately” his reasons for resigning.

In his resignation letter, dated Jan. 31, Rio described his achievements and thanked Duterte, but he did not indicate any reason for deciding to leave the DICT.

During the interview, Rio repeatedly pointed to the DICT’s confidential fund, which does not undergo the normal audit process and which he said was sought by Honasan while he was still senator.

“My original position has always been [that] the DICT cannot use a confidential fund because it’s not in our mandate to do intelligence and surveillance work,” Rio said.

The DICT is the main planning body to improve public access, promote consumer protection and industry development as well as formulating the country’s cybersecurity policy.

Pierre Galla, cofounder of the advocacy group Democracy.Net.PH, agreed as he noted that surveillance is a function of law enforcement and national security agencies.

“At no time during the craf¬ting of the [DICT] law were [surveillance and intelligence] envisioned to be part of the DICT’s mandate,” Galla said in a Facebook post.

These were made in the name of Honasan, who also requested the funds, which were to be used for “confidential expenses in connection with cybersecurity activities,” the agency said.

In a review of the disbursement voucher dated Dec. 2, the COA cited a “defect” in the processing of the transaction.

No DBM noticeIt further said this violated Joint Circular No. 2015-01 with the Department of Budget and Management (DBM), Department of the Interior and Local Government, Governance Commission for GOCCs (government-owned and -controlled corporations) and the Department of National Defense, and “thereby casts doubt on the regularity, validity and propriety” of the disbursement.

For example, the COA said the notice of cash allocation specifically issued by the DBM for the purpose of the confidential expense was not obtained before the processing and release of the cash advance.

It also said the transaction did not follow the physical and financial plan in terms of period of implementation. “The evident delay in the processing of cash advance for its intended program and activities is counter- beneficial to the department’s mandate of cybersecurity policy and program coordination.”

Rio confirmed the existence of a COA audit but declined to provide details, saying he was not involved in handling the confidential fund.

He said on Monday that he was prepared to leave the DICT and retire from decades of public service.

As head of the DICT, Rio also saw the lowering of interconnection rates for mobile services, coming up with a shared tower policy — paving the way for the construction of thousands of new cell sites — and allowing the use of spare fiber lines of the government to improve internet access.

Read Next
China’s virus death toll spikes, more than SARS
EDITORS' PICK
Cherry Mobile teams up with Cloud Panda PH, launches online store
Bato de la Rosa, Risa Hontiveros back bill increasing female recruitment quota in PNP
Someone from the Philippines can become $356 Million richer this Tuesday
Quarantine violations still punishable despite deleted provisions in ‘Bayanihan 2’ – Bato dela Rosa
Mandaluyong fire put under control hours after it started
Leveling up your ‘lutong bahay’ with the kitchen companion you never knew you needed
MOST READ
‘If I had not been SolGen, I will make you eat your words,’ Calida tells Coco Martin
Senate OKs bill authorizing president to postpone opening of classes beyond August
51 percent of German firms holding back investments in PH, but not because of COVID-19
5 car dealership outlets shutting down
Don't miss out on the latest news and information.