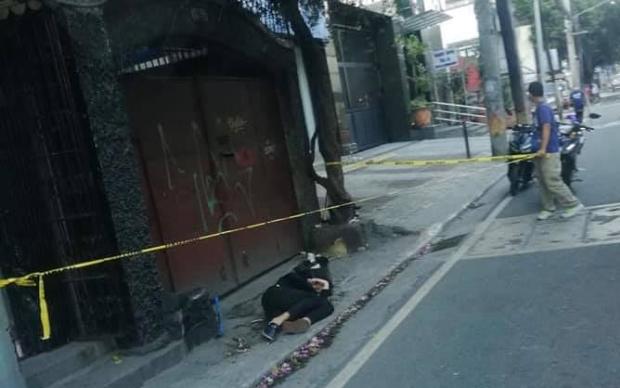 The Korean lying on the sidewalk on Taft Avenue in Manila. (Photo from the Manila Public Information Office)

MANILA, Philippines – The supposedly Chinese man who collapsed on a sidewalk in Manila Saturday afternoon turned out to be a Korean who just had too much alcohol.

The Manila Police District Station 5 disproved earlier reports that a “foreign-looking” man collapsed in Manila on Saturday because he might have been infected by the novel coronavirus.

According to a report by the station, the person shown in the photos and videos circulating online is actually a drunk 27-year-old Korean residing in Parañaque.

Lt. Col. Ariel Caramoan, Station 5 chief, said the Korean went to the station and informed them that he was “surprised” with the online posts showing he may have been infected by the virus.

“(He) disclosed that in the uploaded video, he was asleep due to drunkenness,” the station report said.

On Saturday, a Facebook user uploaded a video showing the man lying on the sidewalk on Taft Avenue at the corner of Remedios Street in Ermita.

According to the user, the man who looked Chinese was having seizures before he finally got up and staggered away more than an hour later.

FAKE NEWS ALERT: There is no truth to the rumor that a Chinese national fell along Remedios Street due to suspicions…