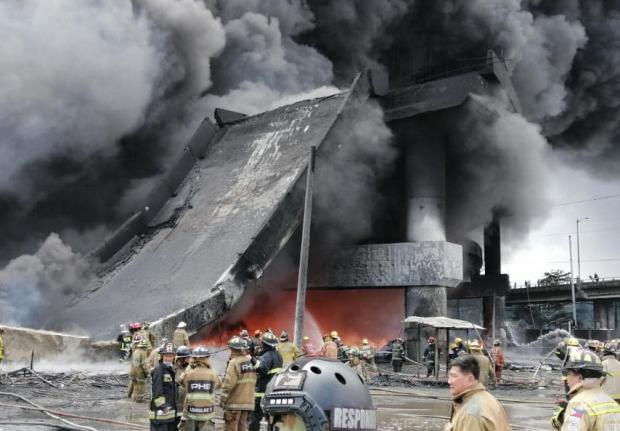 A massive fire in Pandacan, Manila caused the collapse of a part of Skyway Stage 3. (Photo from DPWH Secretary Mark Villar)

MANILA, Philippines — Over 300 meters of the Skyway Stage 3 project was damaged in the fire that began at a plastic plant of San Miguel Yamamura Packaging Corp. in Pandacan, Manila.

“SMC Infrastructure’s technical team went to the site as soon as the fire was under control. According to their initial assessment, approximately 300 meters of the Skyway Stage 3 project was affected,” San Miguel Corp. (SMC) said in a statement issued on Saturday

SMC said it had not yet determined the “full extent of damage and impact of the fire to the construction” of the Skyway, which was built to shorten travel time between southern and northern Metro Manila.

The firm also said it would continue to investigate developments in the fire. It also said that it was prepared to provide assistance to those directly affected by the fire.

“We also extend our full support and cooperation to authorities as they investigate the cause of the fire,” it added.

The corporation also vowed that it would rebuild and resume its construction of the elevated expressway “with the least delay on the projected completion date.”

The fire, which lasted for more than four hours, left over P15 million worth of damage. A portion of the Skyway also collapsed due to the fire.