Where she went, whom she met: Actions taken regarding case No. 1 | Inquirer News

Where she went, whom she met: Actions taken regarding case No. 1 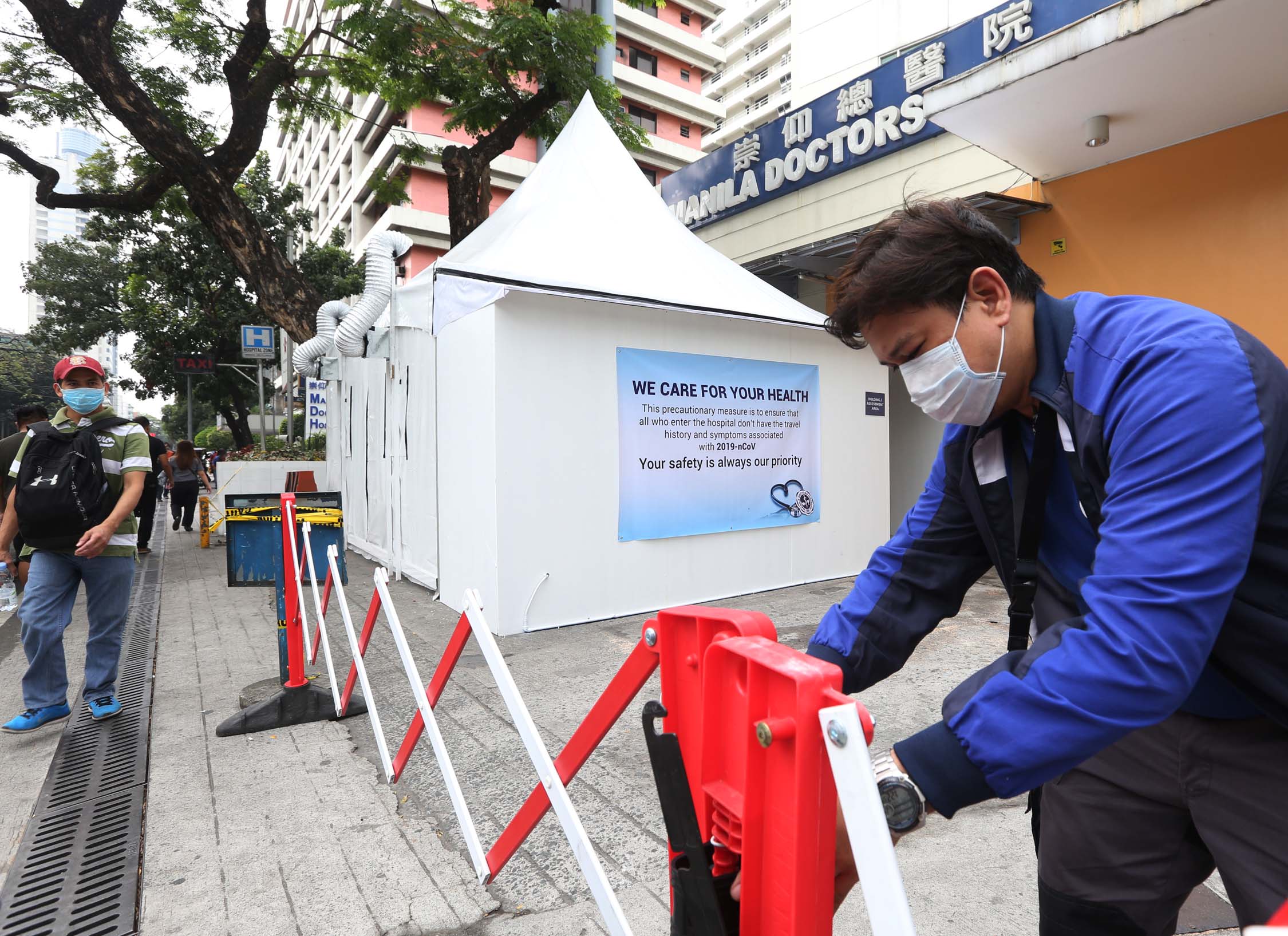 HOLDING TENTS – The Manila Doctors Hospital along U.N. Avenue in Manila have set up holding or isolation tents, an area where patients are first assessed whether they have nCoV symptoms before entering the hospital, following DOH’s confirmation of the 1st Novel Corona virus case in the country on Thursday. INQUIRER/ MARIANNE BERMUDEZ

DUMAGUETE CITY—Employees of a hotel in this city and a beach resort in a nearby town who may have had contact with the 38-year-old Chinese woman found positive for the 2019 novel coronavirus (nCoV) have been ordered not to leave their homes pending Department of Health (DOH) tests on whether they had been infected.

Dr. Liland Bustamante-Estacion, chief of the integrated provincial health office, on Friday said the “home arrest” was being implemented by the owners of the establishments upon the request of the government. She did not say how many employees were quarantined.

In Manila, DOH spokesperson Undersecretary Eric Domingo said the Chinese woman and her male companion, both tourists, arrived in Cebu from Hong Kong on a Cebu Pacific flight on Jan. 21. They later took a Cebgo flight to Dumaguete, and then flew to Manila on a Philippine Airlines flight on Jan. 25.

Health officials said the woman, who had come from Wuhan, the Chinese city identified as the epicenter of the infection, was asymptomatic, or was not showing the typical flu-like symptoms associated with the virus, as of Friday.

In a statement, Cebu Pacific said it was working closely with the DOH and the Bureau of Quarantine (BOQ) to trace other passengers on the flight from Hong Kong.

It said that the company informed them “so they can have themselves checked in case they show flu-like symptoms.”

A PAL statement acknowledged that the woman was a passenger on its PR 2542 flight from Dumaguete to Manila.

It said it was also cooperating with the DOH and quarantine authorities in contacting passengers on that flight and provided the BOQ the flight manifest.

“We are also working to trace any onward journeys made by these passengers and crew on other flights, in case there is a need for BOQ to contact other people for precautionary medical observation,” it said, adding that the two pilots and four cabin crew on the Dumaguete-Manila flight had already been quarantined.

Sources in Dumaguete said the woman and her boyfriend also went to a beach resort in Dauin town, about 14 kilometers south of the city.

Chinese Ambassador Huang Xilian said in a statement on Friday that he hoped that the Philippine government would “take good care” of the Chinese woman, the Philippines’ first case of the 2019-nCoV.

“The Chinese Embassy pays close attention to the development of the patient’s condition and will continue to maintain close cooperation with the Philippine Department of Health in order to obtain more relevant information and assist the Philippine side in the prevention and control of the epidemic,” Huang said.

“At the same time, I also hope that the Philippine side could take good care of the patient and protect her legitimate rights and interests,” he added.

Apo Island barangay captain Mario Pascobello said they were trying to determine whether the woman had also been to the island, a popular destination visited by about 250 Chinese tourists daily.

The island is an internationally-renowned dive site and gaining attraction for its marine turtles, which tourists can swim freely with.

Pascobello said he would meet with Dauin Mayor Galic Truita to determine if they needed to close Apo Island to visitors because of the coronavirus scare.

From Cebu to Dumaguete

Director Jaime Bernadas of the DOH regional office said the Chinese woman and her boyfriend stayed at the Mactan Cebu International Airport for only about four hours.

“Upon their arrival at the airport, they immediately had another flight from Cebu to Dumaguete City. They actually did not spend the night in Cebu,” he said in a press conference on Friday.

Pharmacies in Cebu made brisk sales of bottles of alcohol and face masks following reports that the Chinese woman had been to Cebu.

A staff of a Rose Pharmacy branch told the Inquirer that they ran out of alcohol on Friday morning after some customers each bought several bottles.

A cashier at Watsons in Ayala Center Cebu said they ran out of face masks by early Friday afternoon.

Several other stores told the Inquirer they, too, had run out of face masks.In Iloilo province, Gov. Arthur Defensor Jr. on Thursday asked Cebu Pacific to suspend flights to and from countries with confirmed 2019-nCov cases.

“May we respectfully request for your voluntary cessation of international flights to and from countries positive for the novel coronavirus immediately,” the governor said in his letter to Leah Vallido, Cebu Pacific Air operations manager at the Iloilo International Airport.

Officials on Friday said a Chinese man and his wife who had stayed on Boracay Island were taken to the Research Institute of Tropical Medicine (RITM) in Muntinlupa City on Thursday after the woman was found to have fever when they arrived at Terminal 4 of the Ninoy Aquino International Airport.

The couple were passengers of Air Asia flight Z2-712 from Kalibo, Aklan, which arrived at 1:07 p.m.

Assisted by BOQ doctors, they were first checked at the terminal’s clinic at around 1:34 p.m. and then were transferred to the Terminal 3 clinic around 3:16 p.m., before they were taken to the RITM.

Even before the first 2019-nCoV case was disclosed on Thursday, some Boracay Island residents already initiated an online petition at Change.org urging President Duterte to ban all flights to and from China for at least 30 days, saying the virus “poses a clear threat to all our lives.”

“It has the potential to become the next pandemic, therefore we must prepare for it,” said the petition, which garnered 1,315 signatures as of 8:51 p.m. on Friday, three days after it was initiated.

“Banning all flights from China for at least 30 days before the new coronavirus hits our shores is the best way to prevent an impending disaster. It is simply the most prudent step we can take at this point,” it said.

“Let’s be proactive and quite possibly save millions of lives.”