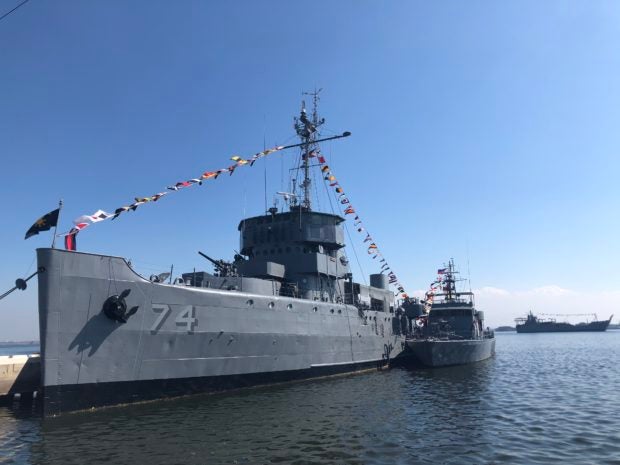 SANGLEY POINT, Cavite — The Philippine Navy is set to decommission 22 vessels in 2020, in what they say a move to save on maintenance costs and to make way for the entry of new assets in the future.

Outgoing Flag Officer in Command (FOIC) Vice Admiral Robert Empedrad, who will retire on Feb. 3, said on Wednesday that the “aging” vessels are already expensive to maintain that they need to be put out of service.

All four remaining patrol killer medium crafts and 11 patrol boats would also be out of the fleet this year, he said.

Earlier in the day, the Philippine Navy bade farewell to two long-serving vessels and one aircraft — the BRP Rizal (PS-74); BRP Nicolas Mahusay (PG-116) and Islander NV304. The two vessels were not included in the 22 ships mentioned by the Navy chief in his speech.

Empedrad was guest of honor at the decommissioning ceremony.

“Luma na kasi ito at ang bilis masira. Maraming ginagastos. It’s very expensive to maintain. Ako na siguro ang FOIC na pinaka-maraming nai-retire na barko, but I don’t care. It’s the only way to move forward. We have to retire [these] ships so we can man our new ships,” he told reporters after the event.

(They are already old and easy to break down. It’s too costly. It’s very expensive to maintain. I might be the FOIC who retired the most number of ships, but I don’t care. It’s the only way to move forward. We have to retire [these] ships so we can man our new ships.)

“It’s aging and the most important aspect of it is it doesn’t have the capability anymore…Kailangan namin ng new personnel, tanggalin sa kanila yung [We need new personnel and we have to get rid of the] old capabilities and train them for new capabilities like the frigate that we are acquiring this year,” he said.

There are no immediate replacements for all of the ships slated for decommissioning, but Empedrad said it would not affect the readiness of the fleet as they are expecting the two brand new missile-capable frigates this year and more assets are due for acquisition.

(It would even increase our readiness because the personnel for the two frigates would be filled up. If the two landing ships would be finished within the next two years, at least they would have already been trained to command it.)

He was referring to the Navy’s planned acquisition of two landing dock ships, along with two corvettes from South Korea, six offshore patrol vessels from Australia; and eight fast attack interdiction craft with missile (FAIC-M) from Israel.

Empedrad said the budget for the FAIC-M is already close of getting President Rodrigo Duterte’s signature. As for the corvettes and offshore patrol vessels, he said they are still waiting for the soft loan proposals from South Korea and Australia.

The landing dock ships are in the post qualification stage, he said.

The outgoing Navy chief said he was also hoping that South Korea would donate an additional Pohang-class corvette, similar to BRP Conrado Yap (PS-39), which joined the fleet last year.

(Hopefully, the Korean government can give us two more Pohang corvettes, because they recently retired one. If we acquire that, then we will have an additional one.)