Duterte bars Cabinet members from traveling to US | Inquirer News 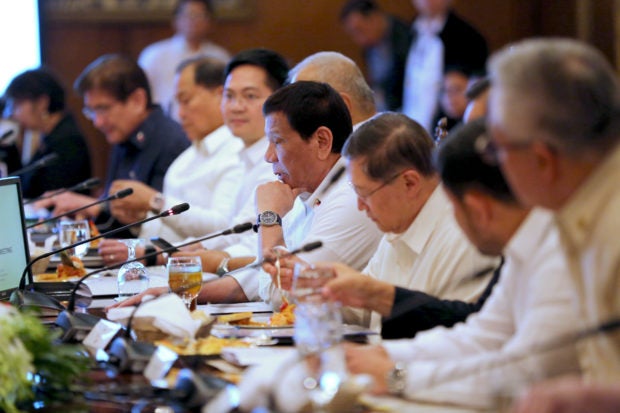 MANILA Philippines—President Rodrigo Duterte on Wednesday barred members of the Cabinet from traveling to the United States, days after he ordered the termination of the Visiting Forces Agreement (VFA) between the Philippines and its longtime military ally.

“I will not allow any Cabinet member to go there at this time. No Cabinet member should be allowed to go to the United States,” Duterte told reporters in an interview.

The President also stressed that he is now slowly “toning down” the relations between the Philippines and the US.

Duterte ordered the termination of the military pact after the US canceled the visa of his longtime confidant Senator Ronald “Bato” Dela Rosa, who has also led his bloody war on drugs.

The VFA, signed in 1998, accorded legal status to US troops who were rotated in the country for military exercises and humanitarian assistance operations.

Dela Rosa, who was Duterte’s chief of police from 2016 to 2018, said the US Embassy did not explain why his visa was voided but he acknowledged it has something to do with alleged extrajudicial killings under his watch.

Since he took office in 2016, Duterte has publicly aired his disdain for the US—the country’s most important military ally and former colonizer—and his desire to pivot to China and Russia.

This was not the first time Duterte threatened to scrap the VFA. But the firebrand leader claimed that he is “not joking” with the termination fo the VFA.

“I am terminating the VFA. I was not joking. The day I said it was the day that I decided it should be terminated,” he said.