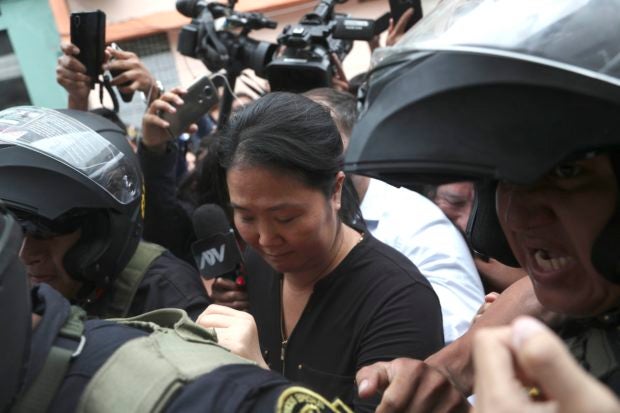 Keiko Fujimori, the daughter of Peru’s former President Alberto Fujimori and opposition leader is escorted by police in Lima, Peru, Tuesday, Jan. 28, 2020. In a court session, a judge decided she must return to preventive detention pending a corruption investigation. (AP Photo/Martin Mejia)

Fujimori, 44, who was in court to hear the ruling by Judge Victor Zuniga, was immediately arrested and taken to Chorrillos women’s prison in south Lima.

“I impose preventive detention for a period of 15 months,” Zuniga told the court in Lima after a hearing that lasted 10 hours.

Fujimori previously spent 13 months in pre-trial detention at the Chorrillos facility before she was released in November, but anti-corruption prosecutors had appealed that decision by the Constitutional Court.

Wearing a black blouse, Fujimori hugged and kissed her husband before entering the courtroom towards the end of the session to hear the ruling.

“If you are watching this video, it is because Judge Victor Zuniga unfairly decided to send me to jail again,” Fujimori said in a video released on social media minutes after her arrest.

“This is not justice. This is persecution,” she said.

Her lawyer, Giuliana Loza, told reporters: “Obviously, this defense is appealing the ruling.”

Once Peru’s most popular politician, Fujimori had rejected accusations that she was a flight risk and posed a danger of obstruction to prosecutor Jose Domingo Perez’s investigations.

Perez, who was not in court, had requested the judge impose a further 18 month pre-trial detention period, saying there was an increased risk she would flee the country as there was new information against her.

Tuesday’s ruling caps a disastrous few days for Fujimori, whose once-powerful Popular Force party was decimated in legislative elections on Sunday, losing dozens of seats in the Congress it had dominated since 2016.

Odebrecht has admitted to paying at least $29 million to Peruvian officials since 2004 and bribing four former Peruvian presidents.

But the Odebrecht scandal stretches far beyond Peru.

Latin America’s largest construction firm has admitted to paying hundreds of millions of dollars in bribes to win juicy contracts in 12 countries.

Fujimori, who twice was narrowly defeated in presidential election runoffs – in 2011 and again in 2016 – has seen her popularity rating plummet during the case though she remains an influential figure in Peruvian politics.

She grew up during her father Alberto Fujimori’s deeply divisive decade as president from 1990-2000.

Keiko sided with her father when her mother Susana Higuchi accused Alberto’s men of torturing her and divorced him in 1994.

With her mother gone from the political stage, Keiko effectively took over first lady duties at the age of just 19.

Educated in the United States, she married an American, Mark Villanella, with whom she has two daughters.

Villanella undertook a hunger strike outside his wife’s prison late last year to press for her release.

She announced in December she was taking a break from politics to prioritize her family.

Alberto Fujimori, now 81, remains in jail for crimes against humanity.

A court held him responsible for massacres of people he said were terrorists in 1991 and 1992, including one incident in which a university professor and nine students were abducted by a death squad and killed.